First of all, some news! I'm happy to announce that Mirror of Wrath, book 1 of The Guardians has been accepted for publication by Evernight Publishing. *dances*

This has to do with WeWriWa and Sexy Snippets because, initially, Kaila and Seamus' story - the snippets, I've been sharing for the past few weeks- was going to be the first book in the series. Now, if everything goes well, they'll be book 2. 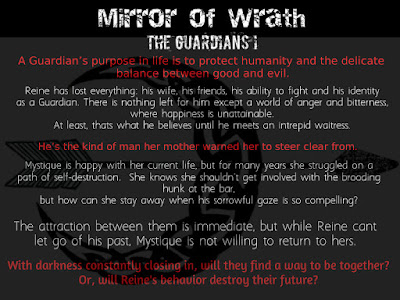 I will begin to share snippets of Mirror of Wrath come October, but meanwhile, will continue with Kaila and Seamus, as I'm still working on editing the manuscript.

Let's recap: Kaila is in front of Sloth's (a Sin lord) door because she needs to access into his lair to save her sister. She was about to go in when she was interrupted by Seamus, a Guardian. They've known each other for years and he calls her babe even though she hates it. In the last snippet, he reminded her that the rules state that she can't be there and she cannot go into the Sin's nest. He's now physically holding her to avoid her entrance into Sloth's lair and waiting for her to explain why she wants to go in.

The last line from last week was: "I can help you, Kaila.” I've skipped several more lines to reach today's snippet. Kaila has told Seamus that Sloth has her sister in his his clutches.

This snippet has been edited to keep to guidelines.


“That’s why I need to go. I don’t know how he got to her but it’s a personal affront. She’s too far gone and I won’t let that bloody bastard take her for good.”
“Your mind,“ he said.
“My mind is what? Too fragile for the underworld? I’m here and I'm not dead, ain't I? May I remind you that I'm a Guardian too? Partially human, yes, but still a Guardian, so go fuck one of your demon spawns and leave me alone. I can take care of myself”
~ ~ ~ ~ ~