I'm still around, it's just that I'm studying for exams!
Posted by Elyzabeth M. VaLey at 8:12 AM No comments:

Will Smith and Gabriele Muccino

Last Monday January 12 actor Will Smith and movie director Gabriele Muccino came to my university to present their latest movie "7 pounds".
This movie, which came out in the States in December is being shown in cinemas starting today (January 16).
After previewing the movie and a few minutes of impatient waiting, Will Smith came into the auditurium embraced by applause and camara flashes. Behind him followed director Gabriele Muccino.
After the faculty's dean asked a question, the students were allowed to do the same. Unfortunately, it was the dean who was giving out the microphone and hand picking the students that were allowed to ask (he only gave the mic to the right side of the auditorium, the left side were several hands were raised -including mine- was ignored).
The first boy to ask, showed some cheek and after getting his Prince of Bel Air dvd signed, and a hug from Wll SMith, he asked his question. I don't recall all the questions that were asked, but in general...
"What would you say saves your soul?" (Smith answered that his wife, while Muccino said it was his children and being a father).
"What movie genre do you prefer?" (Comedy)
"What advice do you give to students who are pursuing a cinematographic career?"
...
I don't remember the rest, although there were only 2 or 3 more.
After that short bit, in which Will showed his friendliness, his domain of the spanish language and his good humour, they left.

It was a memorable day which left everyone in that auditorium with a big smile upon their lips.
Posted by Elyzabeth M. VaLey at 8:08 AM No comments:

I must go to bed ( I have to wake up at 6 tomorrow) but first...Will Smith and movie director Gabriele Muccino came to my University today!!!

I'll try to update tomorrow and tell all about such an exciting event...but here's a picture as a treat! 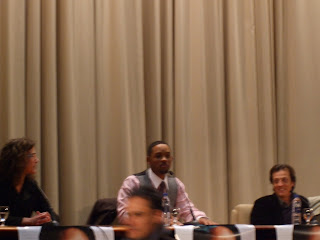 Posted by Elyzabeth M. VaLey at 5:56 PM No comments:

It's been more than 10 years since Madrid center suffered from a snow storm. Yesterday it all arrived unexpectedly.
I live in the outskirts of Madrid and it was not snowing. My surprise was huge when I stepped out of the subway (it was 8:45am)and saw that everything was snowed (and increasing) in the capital. 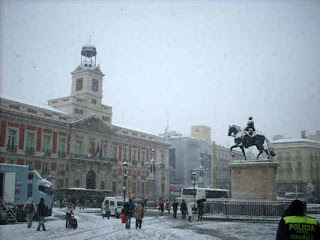 Photo taken from www.20minutos.es This is a picture of Madrid Center Sol.

Unfortunately I didn't have my camera with me.

And no other way to express how one feels than with this Garfield strip:

ps: Click on the comic strip to see it fully. (I have no idea why Blogger cuts half of it out >.<)
Posted by Elyzabeth M. VaLey at 5:44 PM No comments:

Today fifth of January, many homes celebrate the arrival of the Three King's, The Three Wise Men, or the Three King's from the East. These three men,Caspar, Melchior and Balthasar (Gaspar, Melchor and Baltasar in Spanish) are said to have visited Jesus after his birth bearing gifts.

Years ago in Spain, Santa Claus did not exist and the Three King's were the one's in charge of bringing gifts to the children.
Across the years the presence of Santa Claus has come to play an important part in Spanish homes, but the Three King's are still the main characters during this festive season.
Spanish children send their letters to their favorite King: Melchor, Gaspar or Baltasar and await eagerly for their arrival tonight.
So strong is the tradition that many towns (even small villages) prepare a royal mailbox for the children to deposit their letters in and if not the Royal mailman goes to each village picking up the letters.
Even if there is no mailbox there usually is a "Cabalgata" or parade, in which the Three King's riding on their camels appear before the children throwing candy.
The most recognized Cabalgata is the one celebrated in Spain's capital, Madrid.

Melchor in last year's Three King's Parade.
Posted by Elyzabeth M. VaLey at 4:38 AM No comments: