The third and final novel in an epic steampunk horror series, OBSIDIAN SKY closes the dramatic adventures of Claire, Sawyer, Gemma, and Nash, digging up the final secrets of their past, bringing new allies into a dangerous fray, and drawing friends and foes into a battle where the cost may be too much to pay… 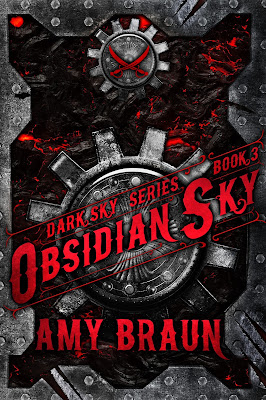 The final struggle against the Hellions has arrived. A trapped engineer and a desperate marauder scramble to fight an enemy with unspeakable power on its side. Time is running out, and one world will be destroyed…

After sacrificing herself to save the lives of her friends and family, Claire Abernathy struggles to outwit her Hellion captors. They torment and terrify her into working on a weapon with the sole purpose of obliterating the world, friends, and love she has struggled to save. If Claire has any chance of saving those she loves, she must delve deeper into the Hellion world, and witness nightmares she could never imagine.

In Westraven, Sawyer Kendric is desperate to find the woman he loves. To do so, he must finally embrace his family’s atrocious past and heal the wounds it has caused. He will be forced to make new allies, uncover secrets that change all he knows, and find the courage to lead a ragtag crew into the darkest, deadliest battle of their lives.

Claire and Sawyer fight to save their broken world in the final installment of the epic DARK SKY trilogy.

Two stories are told in OBSIDIAN SKY––the first chronicling a young engineer named Claire Abernathy as she struggles to survive the in the terrifying world of Hellnore, home of the blood-drinking Hellions, forced to serve their ghastly King and avoid the torment of Davin Kendric, the Hellion general, in hopes that she will be able to escape and return to her home and loved ones. The second story follows Sawyer Kendric, the young pirate captain who must make final peace with his own inner demons and face his responsibilities as a leader, all while uncovering secrets that will either save Claire, or seal her bloody fate. Their adventures will collide in an explosive finale that will change their lives forever, and leave one world altered forever… 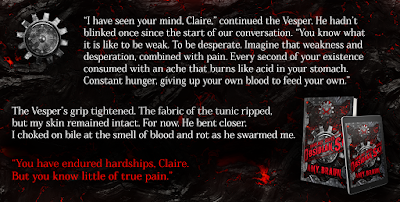 While I love every book in the DARK SKY series, OBSIDIAN SKY is my favorite. I know I’m not supposed to pick a favorite, but I can’t help it. The book was just so much fun to write, allowing me the chance to write a story from two different perspectives and challenge myself as an author while bringing events to a conclusion where everything fell into place. Sometimes I worried that I was going to stray off from the main storyline, but thankfully everything fell into place just the way it needed to.

One of the great things about this novel is that it gets to move outside of Westraven. That’s been the main hub of activity throughout the first two books and two novellas, but I had made an expanded world and wanted to explore it. While Claire is stuck in Hellnore, which I modeled after Mordor from Lord of the Rings (a source of inspiration for almost every fantasy author, let’s be honest), Sawyer gets to explore the Aon, the country beyond the borders of Westraven. Both of them attract more than their share of trouble because let’s be honest, they couldn’t stay away from it if they tried.

World building aside, the best part about splitting the engineer and the marauder up was being able to focus on their individual characters and their final arcs. I did my best to balance the events and keep the tension and action flowing throughout the story, making the pacing fast for one character and slow for the other. When Claire needs a breather, Sawyer is the one getting into trouble and vice versa.

The ending is a lot more emotional than I intended, and it was sad to see these beloved characters reach their conclusions. This series has been with me for years, and there were a couple tears shed when I wrote the final chapter. I’m committed to going out with a big bang, so I worked hard with my editor to wrap up all the details and worked with XPresso Book Tours for a book blitz while organizing a second blog tour. I’ve also discounted the prices of every book in the series, and will keep them lowered for the month of February.

I can’t begin to express how excited the cover and artwork have made me. Deranged Doctor Design outdid themselves yet again, capturing everything this book is about: The red lava that represents Hellnore, the crossed swords for Sawyer, the claw marks and dents inflicted by the Hellions. I’m constantly floored by their fantastic work and can’t wait to work with them again in the future.

This is the second series I’ve closed in the past year, the first being the CURSED trilogy for urban fantasy fans. While I’m just as sad to say goodbye to this one, I’m also relieved that it’s a project off my plate. I learned so much from writing OBSIDIAN SKY and the DARK SKY series, and can’t wait to take these lessons and apply them to future work. 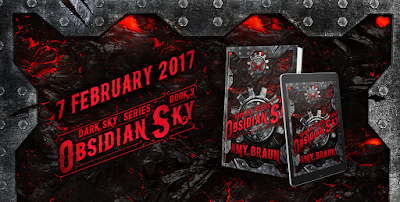 Q & A: Amy Braun and Obsidian Sky– MINOR SPOILERS BELOW.

Q: Were you nervous about writing the end of Obsidian Sky? Was everything planned or were some events spontaneous?

A: I’m a meticulous planner when it comes to world building and plots, but there were some events that I hadn’t intended that were added into the final story. Certain characters and events appeared in places and scenes where I hadn’t intended them to. Characters acted in ways I hadn’t originally planned, or would have to think creatively to escape a challenge. I had a great time experimenting and using a lot of “What If” scenarios where my characters were pushed to the limits and forced to react unconventionally. I felt like I was experiencing their adventures with them, and at some points, didn’t know what would happen next, either.

Q: Did you have any challenges writing Obsidian Sky?

A: Sometimes I can’t seem to control my characters––they go off and do what they want! Sawyer was notorious for this (which isn’t a surprise, really), and his scenes often took off in directions I didn’t anticipate. Claire’s challenges were a little more planned out, though I remember a particular moment about three-quarters of the way through the book where she got to be an ultra badass. That was a lot of fun to do. Other challenges I had were with the new elements and characters being introduced. I wanted them to have a major impact to the story, and had to work with my editor to make sure their presence was balanced with the other characters. But for the most part, I was stoked to write this book and couldn’t be happier with the way everything turned out.

Q: How did it feel to close out a series you’ve worked on for so long?

A: It’s a mix of sadness and happiness. On one hand, I realize how much I’ll miss these characters and this world. I came up with the idea when I was fourteen years old, and now over ten years later, it’s finally over. It’s a lot to let go of. But on the other hand, I feel a great deal of closure. Here was this crazy, random idea I had as a kid, and I finally went ahead and made it a reality. Now that it’s done with and received with better success than I could have hoped for, helped me establish my career, I’m aware that if I work hard, put in the time and effort, and do all the re-writes, I can transform any idea into a book. And if you’re an author still hesitant about such a thing, read the opening dedication to Snow Like Ashes by Sara Raasch. She did the same thing, and she became published. Never give up on your idea!

Q: What will you miss most about the series and the characters?

A: I’m definitely going to miss the world and the creatures in it. Writing the Hellions and Hellnore was so much fun. I’m also going to miss Claire’s inventiveness, Sawyer’s attitude, Nash’s soft-heart, and Gemma’s tendency to scream her lungs out in battle.

Q: Is there any chance of a continuation or a spin-off series in the future?

A: A reviewer actually asked me that not too long ago. While I’ll never say never to anything, at this moment, I have no plans to continue the Dark Sky books. Nash and Gemma have both already had their own spin-off prequel novellas, titled Amber Sky and Smoke Sky respectively, and if I did do another spin-off, it would likely be a prequel series. But the odds of that happening in the near future are slim, given how I want to move onto other projects.

Q: Now that the series is over, what’s next?

A: At the moment, I’m working on two brand new series. I don’t want to say much about them to avoid giving away spoilers, but the first series will be an urban fantasy involving the Greek gods, and the second project is a Young Adult fantasy series with Gargoyles that was inspired by Throne of Glass by Sarah J. Maas. I wish I could tell you more at this point, but I can’t give you anything such as titles or release dates as both of these projects are going to be going to literary agents. I received amazing feedback on the Greek god project from one of my favorite fantasy authors, Michael J. Sullivan, and have been diligently working to improve it. I’ll know in the next month or so whether or not it’ll be going the indie or traditional route, and my newsletter subscribers and website/social media followers will be the first to know.

The same can be said for the YA fantasy Gargoyle project. I’m working on editing it and am hoping that in the next month or so I can send it to literary agents. YA fantasy is extremely popular right now, and I’m hoping that will be my “in,” but if not, I will happily take the project through independent publishing. I learned a lot last year and am ready to use that knowledge to expand my horizons and hopefully gain new readers.

At this point, the only project that will be happening will be the release of the complete Dark Sky box set in April. But anything can happen in this industry, and I doubt anything could slow me down at this point. I’m having too much fun! 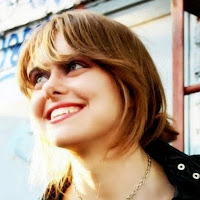 Amy is a Canadian urban fantasy and horror author. Her work revolves around monsters, magic, mythology, and mayhem. She started writing in her early teens, and never stopped. She loves building unique worlds filled with fun characters and intense action. She has short stories in various horror and urban fantasy anthologies and has been featured on various author blogs and publishing websites, and is an active member of the Writing GIAM and Weekend Writing Warrior communities. When she isn’t writing, she’s reading, watching movies, taking photos, gaming, and struggling with chocoholism and ice cream addiction.

PATH OF THE HORSEMAN