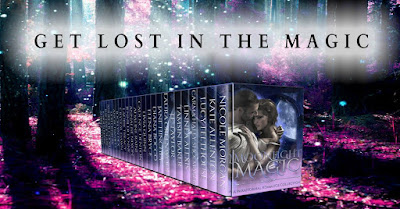 Whether it is the witching hour, dawn, day or dusk, you are sure to find a thrill with these supernatural tales of the paranormal. This collection of stories caters to every taste. From steamy to sizzling with witches, werewolves, leprechauns, dragons and even Greek gods, your pulse will pound and your heart will race. Proceed with caution when you read this compilation because what is read, can never be unread, especially not under the magic of moonlight. 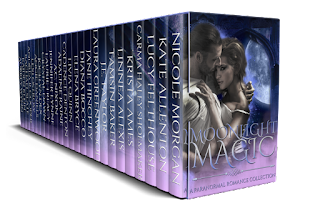 This collection includes:
Secrets of the Hollows (The Hollows 1) by Nicole Morgan
Lucifer once said about Andras, “His power is great, and should be feared.”
Hard Bite by Kate Allenton
It's going to take more than sizzling chemistry to solve this mysterious case.
The Accidental Adoption  by Lucy Felthouse
There’s more to Rosie’s new dog than meets the eye…
Candy Cornered by Carma Haley
Cornered between Alpha protection and Rogue passion.
Mated by Midnight by Linnea Alexis
A man walks into a bar…and meets his destiny.
Her Protectors by Tamsin Baker
Brother shifters meet their curvaceous mate in this short, hot paranormal romance.
Night Hawk by J.E. Taylor
Sacrificed to the shadows, Naomi thirsts for justice…and revenge.

Spellbound by Laura Greenwood
A second chance at love makes sparks fly...literally.
Under A Darkened Moon by Jane Hinchey
She’s a wolf on the run
Wicked by Diana Bocco
One night. One ritual. Passion can change everything.
All Hallow's Eve by Elena Bryce
Seductive Lord Samhain is tempting her to stay forever…
Blood Moon by Livia Quinn
She could destroy his world…or save it.
Fire and Blood by Cadence Denton
She walked through flames to find him.
Marked by Fate Book One by Adaline Raine
A woman seeking answers finds so much more.
Shifter's Choice by Annalise Nixon
Secrecy. Loyalty. Desire. Who needs a band of brothers when you can form a pack of shifters?
Aphrodite Calling by Jennifer Lynne
Sometimes it takes the power of the gods to reveal the woman within…

Wayward Souls by Laurie Treacy
By saving the life of a gorgeous stranger, Holly finds her true self.
Taming Desire by Crystal Dawn
In the end, the wolf will howl because he believes love must triumph over all.
Gettin’ Lucky with a Leprechaun by Jocelyn Dex
At the end of the rainbow, will she find a pot of gold, or just get lucky?
Wilde & Sexy by Angie Daniels
It feels so good to be Wilde…
Accidentally Linked by Lexi Ostrow
Magic doesn’t always cast as planned
Lyric by Andrea R. Cooper
No man can resist a siren's song...
Never Match a Dragon by Rachael Slate
Try to match a dragon, and you’ll end up burned.
Beyond the Ashes by Kaiden Klein
When darkness owns your soul, you have nothing to bargain with but time.
Rolf’s Quest by Aubrey Wynne
A wizard, a curse, a fated love. What medieval dreams are made of... 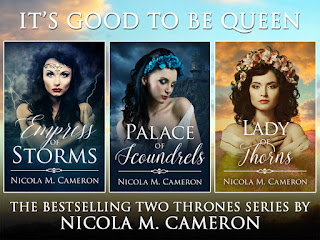 Hello, and thanks so much for having me on today! Lady of Thorns is the third book in a series that was never supposed to be a series. I’ve been describing it as “Lady Mary from Downton Abbey goes head to head with Alan Shore from Boston Legal—and hijinks ensue!” While I’ve resigned Danaë and Matthias to the background for now, fear not, Mattaë fans—book four will run in parallel to the events of Lady of Thorns and covers what happens when Matthias arrives in Hellas for his first official visit after the wedding.

In the meantime I do hope you enjoy the story of Amelie and Alain, and I can promise that they’ll make another appearance down the line as I now know where I’m going with this series. All I will say about that is: buckle up, because it’s going to be a bumpy ride. Mwahahahaha… 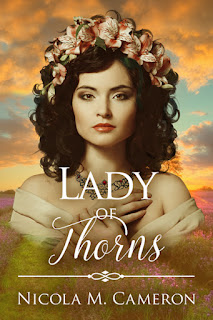 Love was never supposed to be part of the deal…
Lady Amelie de Clerq’s prickly demeanor and earth mage abilities have earned her the nickname “Lady of Thorns,” keeping potential suitors at bay and making her the butt of the nobility’s jokes. Determined to attract a husband who will love her for herself rather than her fortune, she decides to embark on a journey of sensual self-discovery.
Alain LaPorte, wily lawyer and toast of the capital’s social set, has been summoned to Lierdhe to oversee business negotiations with a neighboring earl. When Amelie asks Alain to tutor her in the bedroom arts, he agrees to introduce the virgin mage to pleasure. But lessons in lovemaking soon turn into a matter of the heart, forcing both Amelie and Alain to confront their fears about intimacy, loyalty, and love.
Books in the Two Thrones series:

LaPorte returned with two goblets of wine and handed her one, the deep garnet of the liquid lit with reflected fire from the candlelight. “I’m glad you came. I must admit, I was afraid you’d changed your mind.”
Amelie took a deep sip, hoping the cool, tart wine would help soothe her nerves. “I had to persuade my maid that I didn’t require help getting ready for bed.” As it was, she wasn’t sure that she’d convinced Jeanette with her excuse that she planning on going back down to her office. “I apologize if I kept you waiting.”
“No apologies necessary.” He showed her to a pair of chairs set on either side of the fireplace and sat down. “You look lovely.”
She plucked at the light blue wool of her gown, wishing she had worn something more alluring, or at least with a lower neckline. Her mother’s closet was full of silky, clingy dresses with daring necklines, and she would have given a great deal to rummage through them. Instead, I come to him dressed like some awkward girl.
Which I suppose I am. “Thank you. You look very handsome.”
He smiled at that. “Thank you, my lady.”
A silence fell after that. She fidgeted with the goblet, wishing she didn’t feel like such a fool. The weight of his attention was tangible, causing her stomach to flutter. “I don’t know what to say now,” she confessed.
“You don’t have to say anything. Drink your wine and let me look at you.”
Her mouth dried again at that and she took a quick sip from her goblet. “I’m sorry about the plainness of my gown. I’m afraid I don’t have anything appropriate to wear to—” A seduction. “—something like this.”
His lips quirked at that. “I asked you to leave what you had on because I liked it. Pretty gowns make for lovely gift wrapping, true, but it all comes off in the end anyway. Besides, there’s a certain appeal to a gown such as yours.”
“I don’t see what that could be,” she muttered into her goblet.
“It’s what it represents. Youth, innocence, an unknown territory ripe to be explored. I suspect it’s the reason why so many men have a fondness for deflowering virgins—they relish being the first man a woman has known intimately.”
She tried to lock the question behind her jaws, but it popped out. “Do you like that?”
“Deflowering virgins?”
“Yes.”
“No.”
She slouched lower in her chair. “Oh.”
He held up a hand. “Not to say that I have anything against it, mind you. Everyone has to start somewhere, after all. But I don’t fetishize it to the degree that other men do. I see it more as a starting point on a very pleasant journey.”
She hadn’t thought of it that way. “And you don’t think less of me for my request?”
“Not at all, my lady. You know what you want, and you wish an experienced tutor to help you achieve it. It’s all quite reasonable to me.” He settled in his chair, sipping his wine. “As I’m playing tutor to you in this area, are there any questions you wish to ask me?”
There were, actually. “Will it hurt much?”
“It shouldn’t. If I make sure you’re aroused and open first, you should be able to take me without discomfort.”
Take him. Those simple words set warmth surging through her lower belly. “So, no gushing blood or rending pain, then.”
He rolled his eyes. “That might be the case if a maid beds a huge brute of a man who’s only interested in his own pleasure. But that won’t be the case with you, I can assure you. I’m confident enough in my ability to couch a lance without causing you harm.”
Even if there would be pain, she was prepared to bear it for the promise of pleasure afterwards. She wondered how many women he’d taken to bed, but found she didn’t want to know the answer. “How do we do this? Go from sitting here to naked and in bed?”
Alain studied her, then drained his goblet. “Like this, my lady.”

She was here. The girl from the picture. - #weekendwritingwarriors and #sexysnippets from Hitman's Angel *Lawless anthology* #darkromance

Today I'm proud to share a snippet from my latest release, Hitman's Angel, part of the Evernight Publishing anthology, Lawless, which made it to the #1 Best-Seller rank at Amazon. I'm still stunned. LOL

In other news, there has been no progress with Nanowrimo. *facepalm*

And finally, just want to give everyone that has spread the word, shared or bought, Alpha's Alpha, a big THANKS! <3

~ ~ ~ ~ ~
A few days later, Colt sat in the pew at the back of the church. The minister’s voice carried though the space, like the insistent buzz of a bee. Colt kept his head bowed, and his lips moving silently as he pretended to pray for the soul of the man lying in the coffin at the head of the church. His hands rested on his lap, his fingers laced together to avoid the nervous twitching.
He’d never done this before. Coming to the funeral of a man he’d killed. What the fuck was he thinking? He was a hitman, he killed for a living and never, ever looked back. Not this time, though. She was here, the girl from the picture: Grace Moretti. 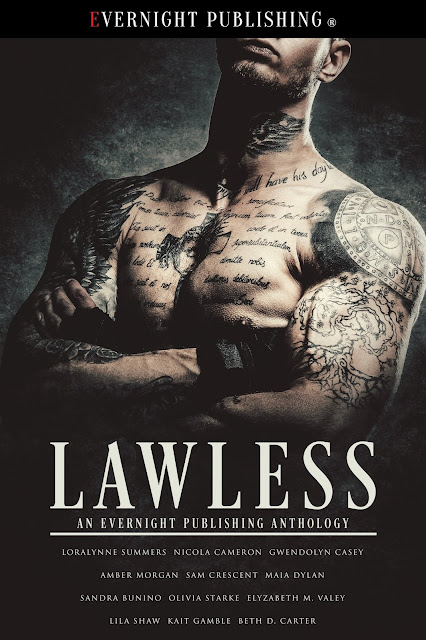 Meet the hardcore heroes of LAWLESS! They’re fearless, dangerous, big on revenge, and defiantly walk on the wrong side of the law. Although their morals may be compromised, their loyalty to that one woman is never in question.

Our twelve hand-picked novellas are dark, dirty, and will make you see bad boys in a whole new light. From bikers to hitmen, these dangerous men won’t be satisfied until they have everything they came for—until they have her.