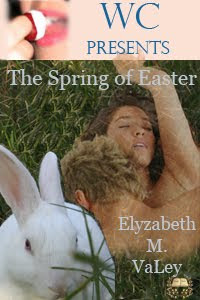 Email ThisBlogThis!Share to TwitterShare to FacebookShare to Pinterest
Labels: The Long and the Short of it, The Spring of Easter

The three girls fell asleep together. They were trapped and their only option was to obey blindly and hope that they didn't get converted into one of the screaming statues. Horrendous creatures made out of flesh and stone. They would be carved up to look like a grotesque gigantic human being. They were not real statues, for they could see and move. They couldn't speak for they had no mouths. However, if you got real close or looked into their eyes, you could see the human bodies inside, screaming over and over again in agony.

One of the girls moaned in her sleep. Her eyelids fluttered as she dreamed. She had gone to bed holding on to a single thread of hope. It was materializing in her dreams just now. He stood above her and swooped her into his arms. She looked up at him with a questioning look. He replied by crushing his lips against hers. She smiled in her sleep. He would come, she was certain.

It's not the first time that I dream of something and wake up with the urge to make a great story out of it. Most of the time though, I give up on the idea. Usually it's because in waking-life, I have already forgotten half the dream or at least an element that was crucial in the dream escapes me in real life. Other times, because the whole thing just makes me nostalgic, I can't bare to relive the dream by writing it down.

Nonetheless, there are times when I'm able to blend the elements of the dream into my imagination and make up something which leaves me satisfied. Unfortunately, those times are rare.

Do you ever write about your dreams? Are you ever inspired by them? Do you think that there's a meaning behind a dream? Or is it just a playful figment of your imagination?

Email ThisBlogThis!Share to TwitterShare to FacebookShare to Pinterest
Labels: dreams, stories, The Long and the Short of it
Newer Posts Older Posts Home
Subscribe to: Posts (Atom)