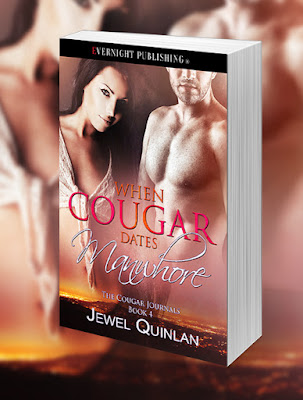 Blurb:
Ava’s nemesis, John, made his feelings known by suddenly kissing her while they happened to be on the same cruise. Not just any kiss, but one that triggered a mind-blowing heat that made her want to learn more about him.
They’ve now been home for over a week where … nothing happens, making Ava doubt the signals she thought she’d received. Had the kiss not been as mind-blowing for him as it was for her? And then, suddenly, he asks her out on a date where she gets to see the intimate, sexy sides of him, which she really likes.
Maybe they are a good match for each other after all … or not. She can’t tell. His actions are so unpredictable that she can’t intuit his motives. Should she continue to leave the door open or write him off as the manwhore she thinks he is? 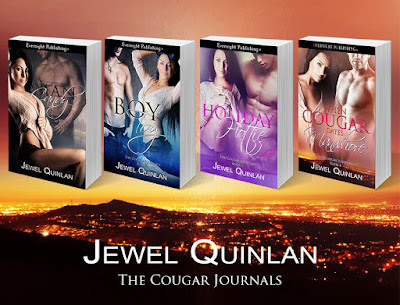 Excerpt:
“Thanks for dinner. I had a great time,” I said. It was trite, but they were the only words that came to mind.
“Me, too. You’re welcome.” He stood with his hands in his pockets and his head tilted, that knowing look in his eyes. The same one that, at the office, had always driven me the nuts. But, here in the semi-darkness and privacy of the corridor, it made me blush. There was something in the intensity of his gaze that made my body prickle in response. Did he know how many confusing signals were firing inside me right now? One side of me was greatly tempted to run my hands through his silver-fox hair, while another waved a red flag and tried to hit the brakes.
“Oh! Thanks for the coat,” I said. I’d almost forgotten about it. I took it off and handed it to him. “Um, well goodnight. See you at the office.”
I started to close the door, then stopped because he continued to stand there with the side of his mouth quirked up in a grin. It would be awkward to just shut the door in his face. “What?” I said. Our gazes locked, and my heartbeat sped up as static filled the air between us.
“You’re not just going to leave me like this,” John said.
“Like what?”
He stepped forward to lean against the doorframe, forearm up above his head, his face inches from mine. “Don’t I even get a goodnight kiss?” he said in a low voice. “I hate to brag, but I think I behaved pretty well tonight.”
I laughed. “Oh please, you love to brag. And, yes, you totally surprised me with your unexpectedly chivalrous behavior. This, however, is more along the lines of what I expected.” I gestured at him from head to toe. It was as if a tiger stood at my doorstep, powerful muscles lithe yet still ready to pounce. I had to admit, it was deliciously arousing to feel his forthright desire. I had a brief flashback of him by the pool on the cruise. I’d seen what the muscles of his torso were like, and now I couldn’t help wondering what they would feel like through the fabric of his shirt.
“So … no kiss?” he said. “Are you sure? Because I thought there was something between us on the ship. And, even tonight, I could swear it’s still there. Aren’t you just a little bit curious?”
I shrugged. “Maybe.” I am. I really, really am. But I wasn’t about to tell him that. Giving a manwhore leverage was just plain dangerous. “I’m just not sure we should go there right now.” I remained where I was, refusing to budge. Kissing John would be the wrong move right now. Something in my gut made me certain of it. It was just one of those instincts that grew more honed with experience. Like a gazelle sensing a cheetah.
He continued to gaze at me with interest. Then he straightened, but didn’t move back. “How about a handshake then? That’s something you do with everyone, so it’s harmless, right?”
I laughed. “True.” I held out my hand and he grasped it. I did my best to ignore how good his palm felt on mine. As we shook, I said again, “John, I had a very nice time. Thank you.”
That’s all he would be getting from me tonight. I stopped shaking his hand, but he didn’t release my fingers. Instead, he raised my hand to his lips and kissed my knuckles, then skimmed his lips in light nibbles down over my skin toward my wrist. The short stubble on his jaw gently scraped as he went. And that, combined with the sensation of his firm, soft lips, made my stomach curl with heat. It was so easy to imagine him trailing kisses like that all the way along my arm to my breasts. Not just there, but even lower to the most private part of me… His gaze flicked to my face and whatever he saw there made his eyes light up with satisfaction. I didn’t want to give anything away, but I was helpless to control whatever I was revealing.

About the Author:
Restless by nature, Jewel Quinlan is an avid traveler and has visited sixteen countries so far. Lover of ice cream, beer, and red wine she tries to stay fit when she’s not typing madly on her computer concocting another tale. In her spare time, she likes to do yoga, hike, learn German and play with her spoiled Chihuahua, Penny. 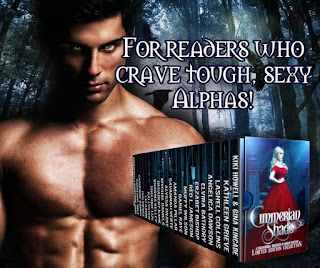 Come fall for the Alphas who play by their own rules despite the odds, whether century-old curses or forbidden love, or worse. For them, what lies in the darkness is worth the fight when it comes to romance.

This amazing boxed set is 99 cents for a very limited time! Snag your copy and give your inner book nerd hours of entertainment today!

He was something else entirely.-- #WeekendWritingWarriors and #SexySnippets from my current WIP #vampires #amwriting #romance

Happy Sunday, lovelies!
It's been a crazy long week with lots of edj work so I've been visiting your awesome posts in small burst throughout the week, but I think I managed to read them all last night. :)
Now, on to the snippet! Last Sunday I shared with you the moment Christopher met Samantha, now, we're having a look at her first impression.
Enjoy!


Samantha held out her hand.

She hoped the tremble coursing through her wasn’t visible and her cheeks weren’t burning too badly. She didn’t know why she was reacting this way. She’d worked with plenty of good looking men before and they had feelings, emotions and problems like everybody else. They were all humans.

Christopher grasped her hand and she bit back a gasp. His cold fingers wrapped tightly around her, squeezing. Abruptly, the chill ended, converting itself into a warmth which blanketed over her like hot cocoa after a day in the snow.

Except, the creature before her wasn’t human. He was something else entirely.
~ ~ ~ ~ ~

Weekend Writing Warriors is the weekly hop for everyone who loves to write! Sign up with your name, blog and email and share an 8 to 10 sentence snippet of your writing on Sunday.  Visit the other participants on the list and read, critique and comment on their 8sunday posts.

Sexy Snippets are seven sentences, taken from a work in progress, or published book, brought to you every Sunday.