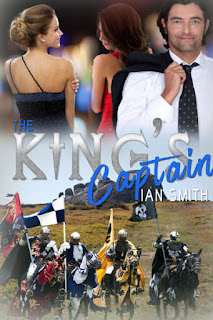 Paul is Hayley's lover and now her leading man. But acting and portraying a hero on a period TV show takes far more than a suit of armour. He's totally out of his depth, personally and professionally.

Help arrives with dramatic lessons in leadership and courage, when strange events put him and his friends in harm's way.

Hayley's happy when her best friend Becky books hotel rooms with a bed big enough for three, which confuses Paul. Sorting out their relationships is even scarier than acting, jousting, and stunt fighting in front of the camera.

Life doesn't imitate art. Life shoulders art out of the way. Discovering a secret threatens Paul's trust in Hayley and Becky, and forces him to face his doubts and fears. He must decide if it's braver to walk away, or ask for honest answers. Even if they may break his heart.

In the first story, Knights Errant, Paul and his jousting team were recruited by Becky and Hayley to work on a show, then he was asked to be Hayley’s leading man, despite having no acting training or experience. Both women were clearly very keen on him, and didn’t make it easy for him to choose between them, and he’s never quite sure who’s the leader of their little group at any time. At the end of the first Paul and Hayley became lovers. The storyline is continued in The King’s Captain, during which Paul eventually finds out about the happy ending the two women have in mind.

Paul also learns that he can be a real-life hero when he and two friends are attacked. There are some supernatural hints in this book which are developed more fully in a “spin-off” novel. This features two characters Paul makes friends with in “The King’s Captain”, and will be the next story I’ll submit to my publisher.

As for the rest of the series, I’ve already got a complete first draft of the third story and partial drafts for the fourth and fifth stories, and I know how I want the final one to go. All I need to do is turn these ideas into engaging and entertaining stories! But that’s the fun part.