Happpy SUnday everyone and apologies for the late post! My Internet connection fell last night and I wasn't able to solve it until now.
Today I'm sharing a snippet from Bear's Beauty (A Christmas Realm Tale),which released last Wednesday! Woot!
Enjoy!
Elyzabeth
*Some creative punctuation has taken place to adjust to guidelines

She stared at him, irises glowing red beneath the white Christmas lights and chest dipping and rising with harsh breaths. Shit. Had he hurt her?
“Melody?”
He cocked his head, and at the same time, she stepped forward. Linking her arms around his neck, she brought him down and smashed her mouth to his. Magnus didn’t question it. He responded with his own hunger, grabbing her ass and bringing her against his body. Melody gasped, as if surprised.  Almost as if she had expected him to move away.
Not a chance. 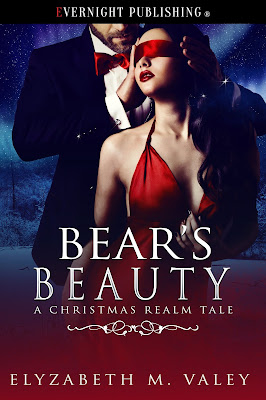