Happy Hump day, lovelies!
Once again the last few weeks have been crazy, but I'm finally on holiday. Yay! Christmas has come and gone and now we're all waiting for New Year's. Do you have any resolutions?

Today, I'm sharing another snippet from  The Beauty of Forever. I'm a little cold, so I figured I'd share a nice, hot snippet with you all.
Enjoy! and Happy 2018!
Elyzabeth

“Christopher, answer me. Why—?”

He didn’t hear the rest of the question. It was always the same.

Why are you like this? Why aren’t you different? And the answer couldn’t be more obvious.

He was on Samantha in two strides, forcing her to back up against the desk. Her fear hung heavy in the air, mingling with the sweet aroma of her blood as it flowed to her extremities. Hunger clawed at him painfully. Christopher bared his fangs. Samantha’s hand shot out to push him away, but the warm contact of her palm against him fueled his longing to an unbearable pitch.

Christopher pressed against her, relishing the weight of her fingertips and the way her nails dug into him.

“No? Then why are you trembling, doll?”

He moved her hair aside, bringing her neck to his view. Her vein pulsed frantically, calling to him to dig in.

His gaze shot to her face and what he saw undid him. Christopher slammed his lips down on her. Fireworks exploded, sending sparks across every part of him and coming to rest on his rapidly thickening cock. Samantha moaned into his mouth, tugging on his bottom bow and ratcheting his arousal.

“You’re going to burn,” he choked, cupping her ass and lifting her to the edge of the table.

Samantha grabbed the lapels of his jacket and pulled him toward her. She wrapped her legs around his waist.

He snaked a hand between them. Finding the elastic of her panties, he shoved them aside and slid two digits into her, finding her wet.

Her body bowed in response. Christopher pumped his fingers in and out. Samantha threw her head back, biting her lip in an attempt to quiet her sexy mewls.

“Tell me you want me,” he demanded. “Look me in the eye and tell me, Samantha.”

Running her hands down his arms, she gave him a gaze glazed with lust.

The ache in his chest returned, stealing his breath.

“I need you,” she declared.

The pang scattered, leaving behind a dull throb which energized him.

“You’ve made a grave mistake,” he said. 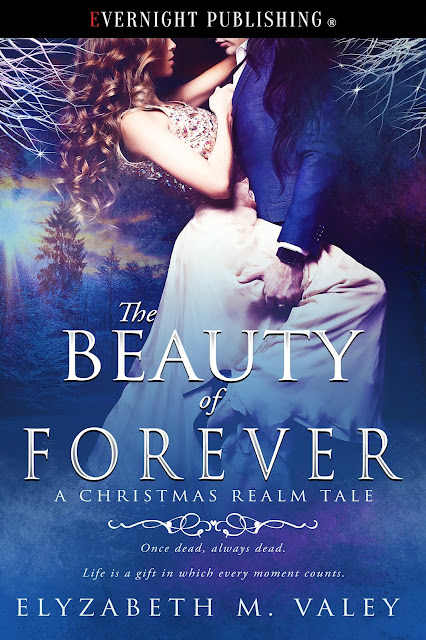 Once dead, always dead.
Christopher Beaufort works in what could easily be the most cheerful place on earth, Santa’s Christmas Realm, but as a vampire, he is nothing more than a shadow among the living.
Worn out by the demands of his job as Chief Toy Officer, Santa assigns a human woman to help him, Samantha Kraus. Tantalized by the fiery red-head, Christopher makes it his business to seduce her, but as he does, something within him begins to stir.
Life is a gift in which every moment counts.
When Samantha Kraus accepted the job of assistant manager at Santa’s, she expected elves, fairies and maybe some shifters, but definitely not vampires, and least of all did she imagine her boss would be one of them or that she’d be attracted to him.


Though she tries to remain professional, Samantha finds herself falling for Christopher. But, can a vampire’s heart ever beat again?
Available at:
​Evernight Publishing
Amazon.com
Amazon.uk
​Bookstrand ​
Posted by Elyzabeth M. VaLey at 12:00 AM