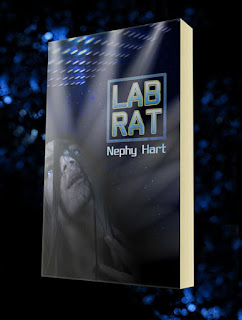 At thirteen, Gabriel was subjected to experimentation designed to awaken latent psychic abilities.

He’s been locked in a downward spiral of self-destruction ever since.

Then one night he meets Laurie, who is the antithesis of everything Gabriel’s become: cheerful,

optimistic, and comfortable in his own skin.

Laurie pursues Gabriel. But Gabriel no longer believes in love. With a dark past and a history of

how many obstacles Gabriel places in his way.

When Gabriel starts hearing voices in his head, he realizes they belong to the scientists who

experimented on him. Worse, they’re trying to track him down.

With the past nipping at his heels, Gabriel and Laurie flee together.

Can they outrun the enemy? Can they save Gabriel before either his life or his sanity are forfeit?

And is Gabriel as helpless as he, or Laurie, thinks he is?

Excerpt
IT’S THE LIGHTS. I hate the lights—they’re so bright. I don’t like bright. I want to go back

“Good morning, Gabriel. Are you going to be a good boy today? You weren’t yesterday,

“All in good time. We have work to do today, and the sooner we get it done, the sooner

“We’ll see. Relax now, Gabriel. You know it’s easier when you relax. I’m going to give you

an injection and I want you to relax and let your mind open. Relax now, Gabriel. I’m going to start

The lights. I hate the lights.

It’s the screaming that wakes me every time. But this time I’m not alone. There’s

someone here with me. My housemates never come near when I’m screaming; they know better.

It scares them. It scares me.

I prise open my eyes and the shock stops the screams. It almost stops my heart. I try to

happened last night? Was I that drunk?

“When you stop shaking.”

“Fuck that. Get away from me.”

I manage to push him back and he stretches out like a cat, propping that head of glorious

hair on one hand. He looks at me with his amazing eyes.

“What the fuck are you doing here?”

“That’s okay. I wasn’t expecting thanks. Not from you.”

“Thanks? What do I have to thank you for?”

“Well, I could have left you unconscious on your doorstep, but I thought you’d be more

Laurie shrugs. “You threw up.”

I groan. I’m not worried about passing out or throwing up—that’s not unusual for me,

especially after alcohol—but the thought someone saw it, saw me, and took off my clothes…. I’m

horrified. No one sees my body. No one.

“Get the fuck out of here.”

“Just as well I wasn’t expecting thanks, isn’t it? Otherwise I might be feeling crushed right

Laurie’s expression turns introspective. He reaches out and runs his finger over my arm.

The touch sends shivers through me, and for a moment I freeze, staring at his hand. It’s been a

long time since anyone has touched me, especially there.

Stunned, I raise my eyes and gaze into the deep blue orbs. “Is it because of that?” he says

out of my room. Get out. Get out!” I know I’m being unreasonable, but I can’t help it. I know I’m

getting hysterical, but I can’t help that either.

Looking completely shocked, he does what I ask.

I collapse back on my pillow, shaking… and not because of the alcohol, or the fits. What

the hell just happened? No one, no one, sees me naked. But Laurie…. I turn on to my side and

hug myself. I’m hardly aware of the tears until they overwhelm me, and I sob until I’m exhausted.

Nephy Hart was born into a poor mining family in the South Wales Valleys. Until she was 16, the

toilet was at the bottom of the garden and the bath hung on the wall. Her refrigerator was a stone

slab in the pantry and there was a black lead fireplace in the kitchen. They look lovely in a museum

but aren’t so much fun to clean.

Nephy has always been a storyteller. As a child, she’d make up stories for her nieces, nephews and

cousin and they’d explore the imaginary worlds she created, in play.

Later in life, Nephy became the storyteller for a re enactment group who travelled widely, giving a

taste of life in the Iron Age. As well as having an opportunity to run around hitting people with a

sword, she had an opportunity to tell stories of all kinds, sometimes of her own making, to all kinds

of people. The criticism was sometimes harsh, especially from the children, but the reward

It was here she began to appreciate the power of stories and the primal need to hear them. In

ancient times, the wandering bard was the only source of news, and the storyteller the heart of the

village, keeping the lore and the magic alive. Although much of the magic has been lost, the stories

still provide a link to the part of us that still wants to believe that it’s still there, somewhere.

In present times, Nephy lives in a terraced house in the valleys with her son, dog, bearded dragon

(called Smaug of course) and three cats. Her daughter has deserted her for the big city, but they’re

still close. She’s never been happier since she was made redundant and is able to devote herself

entirely to her twin loves of writing and art
Posted by Elyzabeth M. VaLey at 12:00 AM