Author Spotlight TNTConfidential on Scarlett Knight and The Art House


Hi guys, today I have the pleasure of introducing this great novel by Scarlett Knight. I've had the pleasure of reading it and I can assure you, it will keep you hooked from beginning to end. 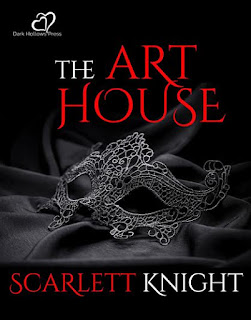 Granted the opportunity to model for world-famous yet reclusive artist Edgar, journalist Janelle Ryan thinks she's finally landed the story of her career. What she doesn't realize is that by staying at Edgar's famous "Art House," her focus shifts from the news story to experiencing an unexpected personal awakening of her mind, body, and soul.

As a consequence, painful emotions she's been repressing for years begin to reemerge. Facing her demons head on, she realizes what is most important to her - how to forgive, and most importantly, how to love again. ***
Excerpt


Drinking sometimes caused old feelings to resurface and made unwanted tears fall. It was undeniable, though: ever since this adventure had started, she’d had more than a few reminders of times and people she’d tried for years to forget. She passed a kitchen and several other rooms too large for a bathroom and too dark to really see into. Checking behind elaborate doors, she found a number of closets and staircases but no bathroom. Finally, she found a small restroom and after relieving herself, checked her appearance in the floor-length gold-framed mirror that wasn’t hanging but rather propped against the wall at a stylish angle. She rubbed away the smears of makeup under her eyes and tried to recapture some of that buzz which had leaked out through her tears.

The woman’s head bobbed back and forth, her hand stroking the man’s hard cock, which he’d pulled through his pants. She seemed to be enjoying the event as much as he was. Janelle knew she should give this couple their privacy, even if they were doing this out in public. It was their moment of passion, not hers. Still, she found herself unable to break away, her breath growing shallow.

The man gasped and muttered “faster” in a desperate, guttural tone. Janelle had a strong desire to reach inside of her soft blouse and pinch her hardening pink nipples beneath the shell of her bra. She looked down, ashamed but fascinated. A burst of movement brought heat to her cheeks as she panicked, fearing she’d been discovered. But it was only the man, pulling the woman up from the floor and positioning her on all fours on the stairs. He lifted her skirts, her underwear already down around one ankle. His erection, barely visible in the shadow, arced up from his body like an arrow.

He plunged into the woman. She groaned, and Janelle bit down on her thumbnail, her sex tingling with the strong sweet scent of her own stimulation. She needed to leave them alone, let them have their moment, but she couldn’t move her feet. Their passion was intoxicating, something real, unlike so many of her relationships of late. She could actually feel their lust, the forbidden rush of this secret act trapping her in place. She kept her hand on the doorknob, the other hand slack at her side, though she desperately longed to touch herself.

“Darling, did you hear something?” the woman asked, and they stopped moving.
***
For more, please visit Scarlett’s blog!
http://scarlettknightauthor.blogspot.com/2016/04/the-art-house.html