#TNTConfidential Author Spotlight on Grace R. Duncan and No Sacrifice

Gasp! Can you believe June is almost over? Time flies when you're in good company and today is no exception. I have fabulous writer and Wednesday Flasher, Grace Duncan, here with me. She brings her latest release, male/male romance, No Sacrifice and is talking about research and same-sex dance couples!

Thank you very much to Elizabeth for sharing her blog space with me today!

Everything I write seems to inspire extensive research. Every bloody story. Sometimes, it's stuff I expect. When I sat down to write No Sacrifice, I expected to research television studios, what happens on sets, how things work behind the scenes, and so on. I expected to research Hawai'i (Patrick's home) and Georgia (Chance's birthplace). These were most definitely not a surprise.
But as I was wrapping up the story, tying up the loose ends and finishing up the epilogue, I found myself researching something I very much did not expect. I had stumbled across videos before with same-sex dance contests. I didn't think much of it at the time. I watched them and enjoyed them. But then I found myself trying to figure out exactly how that works. The idea of someone leading the other is so firmly entrenched in our ideals that I wondered what they did when both partners were used to being the one to lead.
Turns out, there are, in fact, dance lessons to teach same-sex partners how to dance together. (And, of course, to teach those with two left feet *coughChancecough* how to not step on their partner's toes.) When Patrick and Chance knew there were going to have to dance together, they both realized they'd need lessons.
But finding references to these lessons wasn't so easy. I ended up not needing to include the lessons themselves, in the end. So I was grateful for that part. But I did go through and do quite a bit of video watching to see how it would work. In the end, Patrick gave the lead over to Chance and I found myself spared having to get too detailed with the scene. But I had fun researching it, enjoying what I did watch.
The main video that inspired that part of the scene is below. One of the things I really liked about it is that the two in here actually change who leads during the dance. Very cool. There's even a lift!
The main video: https://www.youtube.com/watch?v=TZEckpXniWo
For a few of the other videos that I used for research, you can go through the playlist here:
https://www.youtube.com/playlist?list=PLz7oGWHL9LPK1UpahY586IEW3BH2GT8cy

Be sure to head over to the Dreamspinner Press facebook page tomorrow for more about No Sacrifice, for giveaways and discounts! I have lots of fun planned (and much in the way of hot men) so do stop by!
* * * 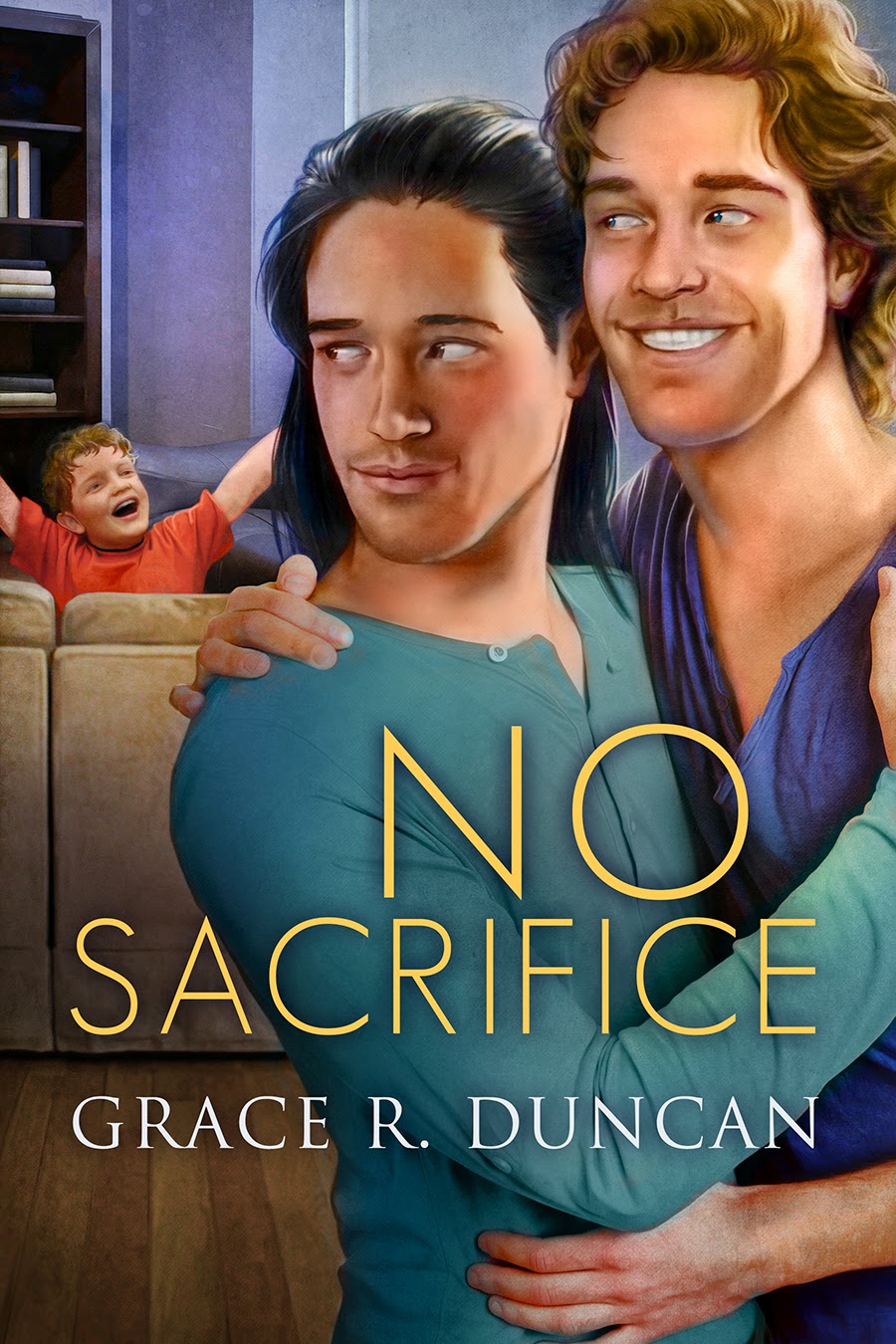 Patrick has taken his acting talents from high school all the way to a role in a major television show. But as the show progresses, his life of absolute certainties crumbles when he finds himself reacting to the kisses of his male costar. He refuses to accept it, reminding himself he’s married and a father—and thus, straight.
One night he goes to drink his worries away, meets Chance Dillon, and can’t take his eyes off the man. After having a little too much alcohol, he spills his problem to Chance, who helps him realize there’s something other than gay and straight. Patrick’s new understanding of his bisexual identity helps him sleep better—until the next day, when he discovers Chance is a sound technician on the same set.
As their friendship grows and Patrick’s marriage ends, he recognizes a possibility for much more with Chance. But Patrick isn’t ready to be out the way Chance has been for so long, and when the matter is taken out of Patrick's hands, he pushes Chance away to spare him the mess Patrick's life has become. By the time he realizes his mistake, it may be too late.

Grace R. Duncan grew up with a wild imagination. She told stories from an early age—many of which got her into trouble. Eventually, she learned to channel that imagination into less troublesome areas, including fanfiction, which is what has led her to writing male/male erotica.
A gypsy in her own right, Grace has lived all over the United States. She has currently set up camp in East Texas with her husband and children—both the human and furry kind.
As one of those rare creatures who loves research, Grace can get lost for hours on the internet, reading up on any number of strange and different topics. She can also be found writing fanfiction, reading fantasy, crime, suspense, romance, and other erotica, or even dabbling in art.