Hey everyone! Happy Friday! Today I'm offering you something a little different: an interview with talented author Jillian Kid!

Jillian just released her first book "Vengeful Bounty". Beware, in it you will encounter a sexy heroine,danger, action and a hot musician with more than music on his mind ;-) 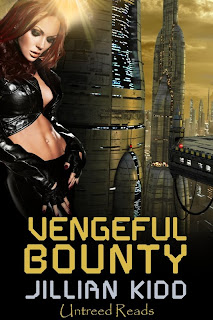 In the year 2053, Dallas bounty hunter Mina Maxwell’s goal is to reach Global status, and she is only three catches away from the needed 25. During one of her hunts, she lets criminal Roberto Franco go in order to capture his higher-ranking boss. It is a mistake that will come back to haunt her.

As she continues on toward her goal, she battles with the demons of her past, among them being Damon Wolfe, her Global bounty hunter lover who left her without explanation. Attempting to heal the damage is Mina’s good friend, musician Jackson Kincade, who has been hinting at taking their friendship to the next level if she will let him.

All hope for the future shatters when Roberto returns, hunts her down and kidnaps her. His plan: weaken her body and crush her spirit so he can sell her to the highest bidder.

His eyes darted to my hand that I kept floating above the door bar in case I needed to grab hold. The digital speedometer topped 80 mph.

Colt loved his cars. But his 2008 Dodge Charger was his baby. I wish I could tell you how much he spent on revamping the 45-year-old vehicle to have hover capabilities, and how much he spent daily on speakers and paint jobs and transparent technology and whatever else he’s done to it, but I probably couldn’t do the math. Math never was my strong point.

Although Colt did his share of going after the “Bad Fish,” it wasn’t a full-time career for him like it was for me; it was more of his hobby—an extremely dangerous, adrenaline-pumping hobby that just happened to be my full-time job and the love of my life (love of my life except for maybe homemade chocolate lava cake, which, I have to say to you lonely, single men that might be wondering, is most definitely the way to a woman’s heart).

A Scorpions’ song came on the classic oldies station and Colt cranked up the volume until I felt the bass and drums vibrate ass-kicking energy through my body, readying me for action. As soon as the lyrics crashed in, Colt sang with them at perfect, ridiculously loud pitch. I couldn’t help it; I cracked up with delight and relaxed.

His hair changed about every time I saw him. Tonight it was purple and flying everywhere like some midnight elf’s mane from some classic fantasy novel. His eyes were a similar shade of violet; he enjoyed switching out different colored contacts almost as much as he changed his hair. He tapped the steering wheel and belted out all the rockin’ wails while I grabbed the door handle a little tighter and the evening Dallas lights whizzed by out the window. Colt tends to drive faster depending on the speed of the song. I swear the man is hard-wired to music.

An old 2022 Buick with wheels held us up and we slowed from 80 mph to about 40. As if the tires weren’t a dead giveaway, the wheelchair symbol on the license plate made Colt groan.

“All right, wrinkles, if you aren’t going to drive, then get off the highway!” he said. “The law really should outlaw wheels.”

He opened his mouth and matched the song’s wild wailing vocals as he flipped the Charger’s up signal switch and checked the mirror on the dash that would reveal any hover vehicles that might be above us in a blind spot. Clear and good to go.

With his heel he pressed the elevation pedal that stuck out from under his seat like a metal tongue and up we went, over the slow car, and down in front of it, hovering the five legal inches above the road.

“Few miles and we’ll be there,” Colt said, taking the exit to the right.

I nodded, getting focused on the task at hand mentally and emotionally.

Tonight’s Bad Fish was Nando Gutierrez. He headed the Texas branch of a national organization called “The Flowers of Eden.” Nando was what we bounty hunters liked to call an “Octopus,” meaning the type of criminal who has a lot of hands that kidnap for him. This Octopus’s prey happened to be young beautiful women, whom he hooked and kept on a steady stream of drugs, and then sold to the richest pervert bidder.

But like most criminals, Nando had gotten careless. He liked to frequent the dance clubs in the Metroplex, and he’d put enough of his trust in people he thought he could buy off to keep his whereabouts a secret. Luckily for us, one of the people he’d paid was Colt’s long-time friend Aaron.

Aaron worked at The Den of Iniquity, or as the club-frequents called it: “Sin Den.” He got an extra $5,000 ahead of time in his bi-weekly paycheck if he would keep mum about Nando’s occasional visit. And if the money wasn’t enough of a motivator, the threat to kill him should have been.

But fearing death wasn’t in Aaron’s nature (one couldn’t be afraid of anything and still remain friends with my brother), and besides that, he had plans to quit his job tomorrow and disappear. How timely! Apparently he was tired of Dallas and wanted to move north.

“He need any help changing his identity?”

The song gave way to a commercial:

“Be the first in line to order your new incinerator. Available at all House Aid stores now for only $399.99. This new model from Hoover is guaranteed to be safe for children and has updated organic-safety sensors that prevent accidental burns.”

I crossed my arms and took a deep breath. I glanced at Colt, whose brow was now furrowed in thought. The collar of his red plastic flex-wear jacket was flipped up, but I could still tell from the little twitches of his mouth that he was chewing on the inside of his cheek, just like he did when he was a little boy and deep in thought.

“Are you sure about this?” I asked. “Does he know what could happen?”

“And you’re sure we can trust him?”

“Mina! Trust me. You’ve got to trust people.”


Grab your copy of Vengeful Bounty at:


I love your cover, Jillian! Mina seems like a hot chick ready for action. Tell us a bit more about her and your work.

What song would you recommend for listening while reading Vengeful Bounty?

I'd say, pick your favorite rock band, and play one of your favorite songs of theirs. Mina, the main character, loves rock music, especially classic rock.

Describe the main characters of Vengeful Bounty in one word:

What was your inspiration for this story?

What are your favorite reading genres?

Oh, everything. And I do mean everything. I read biographies, fantasy, sci-fi, true crime, romance, horror—you name it and I probably read it.

Vengeful Bounty is labeled as a Science Fiction story- is this your writing niche? What other genres do you see yourself writing?

I don't know if it'll be my one niche. I enjoy writing things that entail a little more wild creativity, such as sci-fi and fantasy and horror. But I enjoy blending genres, too, which I think I've done a bit with Vengeful Bounty.

What are some of your favorite authors?

Ah, hard one! I have so many. A few are Anne Rice, Dean Koontz, Laurell K. Hamilton, Stephen King, George R.R. Martin, and Nora Roberts… I really could go on and on. Oh—and Elyzabeth M. VaLey, of course.

What is your favorite time of day for writing?

Probably between 7 p.m. and 9 p.m. The moon is usually out, and the nightly creative vibes start up around then.

Where is your favorite place for writing?

In a house with no distractions, sitting in a comfy chair with my laptop on my lap

Name one of your pet peeves and explain why?

When people say they're going to do something and then don't follow through, that bothers me. A lot of people aren't good for their word anymore, and that's really unfortunate. Mean what you say, folks!

The Christmas Holidays are almost upon us: What do you like best and least about them?

I love the chilly weather and darker evenings, which is perfect for reading and writing and enjoying some hot chocolate, coffee, or tea. I don't love the pressure people put on one another to spend every dime they have on presents, though!

I just finished editing a book that I wrote in college, and I'm considering submitting it to a few publishers or agents if I feel the timing's right. I'm also jotting down some notes for the sequel to Vengeful Bounty…

Email: (I love getting email! Drop me a line and let me know what you thought of the book!) jilliankiddauthor@gmail.com