Let's all give a warm welcome to today's visiting author: Lorraine Nelson who has just released her novel "Zakia and the Cowboy" published through Evernight Publishing.

I've had the privilege of asking Ms. Nelson a few questions regarding her work. Just keep reading to find out more about this new release and its author. 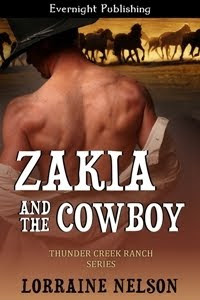 With a stalker following her every move, Zakia has no choice but to flee the city. Her options limited, she runs to the only place she's ever felt safe...the Thunder Creek Ranch and her ex-husband, Lucas.

Will he protect Zakia from the stalker? And if he does will either of them be able to ignore the feelings that have simmered for so long, ready to explode... before danger either draws them together or pulls them apart.

Zakia and the Cowboy Excerpt
“Sorry, Darlin’. Always a cowboy,” he apologized.
He sat on the edge of the bed and struggled to remove his cowboy boots, then disposed of pants, briefs and socks. When he looked up and saw the still smooth, silky skin of her upper torso and full breasts partially covered by her beautiful, long, blonde hair, he had to ask himself how he got to be so lucky. Déjà vu was very much in existence as he admired the woman standing before him. Zakia was still every bit the exquisite, sexy woman she’d been on their wedding night, only now she was trying hard not to giggle.
“What’s so funny,” he asked with a grin as he reached for her.
“Just a little touch of déjà vu going on.”
“I was thinking the same thing. You’re just as beautiful now as you were on our wedding night,” he stated as he pulled her back into his arms.
“Well, I was thinking it funny that you said those exact same words on our wedding night.”
“What words?” he asked, curious and trying to think.
“Sorry, Darlin’. Always a cowboy.”
“Ooohh, those words. It’s true. A cowboy doesn’t go too far without his boots.”
“Did you mean it, Luke?”
“Mean what?”
“That you still think I’m beautiful.”
“Do I need to install mirrors on every wall in the house?” he teased. “Yes, you are the most beautiful woman I’ve ever seen, and sexily built. Now, shut up and kiss me.”
“Oh, I so like a man who knows what he wants,” she cooed.
When she reached for him, pulling him down for a kiss filled with all the passion he remembered, his heart soared. Gone was the polite restraint they’d held to since her arrival. He kissed her back, longing for more, aching for the promise her lips delivered.
His hands moved to her breasts, rubbing and tweaking the nipples to turgid peaks, then massaging the silken softness until she moaned against his mouth in pleasure. Breaking the kiss, he took one rosy nipple into his mouth, sucking and nipping lightly before transferring his attention to the other one.
He worked his way down her body, one kiss at a time, having to keep a tight rein on his control as she breathed his name over and over again. Her body writhed beneath him as he reached her sopping pussy, her unique scent driving him wild as always. He parted her lips and kissed her, rubbing tiny circles on her clit with his thumb. His other hand reached beneath her to fondle her ass as he began sucking her, his tongue laving and prodding her wetness until he could take no more. Rising up, he coaxed her legs apart with his knees and positioned himself. As he looked into her desire-glazed eyes, he moved, pushing into her with one hard thrust.
Then he stilled. It had been as tight as their first time. “Did I hurt you?”
“Uh, uh.” She shook her head as her body began to move, encouraging him to pull out and push into her warmth again.
She grabbed his hips, pulling him closer, deeper, and they fell into a rhythm that told of their familiarity with each other. It was as if he’d gone back in time, back to the days of love and laughter, caring and sharing their lives, completing each other. He thrust in and out, faster, harder, seeking the rapture he’d only found with the woman lying beneath him.
Thought took a long, slow ride after that as they concentrated on catching up on years of lost loving, and he was pleased to note, she still had that deep, husky, pleading note in her voice when she screamed his name.

I'll be right back, I think I need a moment to cool off after that one...

I'm back! After reading that the first thing that pops to mind is:

Elyzabeth (E): Lorraine, What was your inspiration when writing “Zakia and the cowboy”?

Lorraine Nelson (LN): I’ve always loved cowboy stories. Once I picked out names, a location, and began writing the characters seemed to want to tell their own story.

E: I’ve really liked the name Zakia. Where did it come from?

LN: A woman named Zakia phoned the call centre where I work and bingo! I knew I had to use the name in a story. So the novel really evolved from that chance call.

E: What was the greatest challenge when you wrote this novel?

LN: Making it believable. I’ve never been on a ranch in my life, yet I could picture the Thunder Creek Ranch nestled at the foothills of the Rockies.

LN: Why not? LOL I’ve always loved westerns. I grew up with movies of John Wayne and Clint Eastwood, and books by Zane Grey and Louis L’Amour. (My father read them and I’d snag one whenever I got the chance.)

E: I noticed that “Zakia and the Cowboy” and your soon to be published novel “His Christmas Wish” centre on the role of ex-husbands and ex-boyfriends. How come?

LN: I believe in second chances when the right people are involved. Sometimes, life interferes and communication breaks down, so I like to show that things can work out if you want it to bad enough, given the right circumstances.

E:What are your writing pet peeves?

LN: Typos! I hate typos and poor grammar. I also hate interruptions. I’ve been known to lock the door and turn off the phone when writing. J

E: When and where do you usually write?

LN: I write at my desk in my home office anytime the muse strikes. Usually late at night to avoid said interruptions.

E: What are you working on right now?

LN: I’m working on the 2nd and 3rd books in the Thunder Creek series. It’s proving quite the challenge to keep timelines in sync. J

His Christmas Wish needs a couple more tweaks, then it’s ready to go live on Amazon, aiming for Oct 15th. 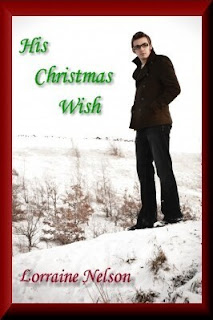 Thank you so much for having me here today, Elyzabeth!

For more information on Lorraine and her work visit her website at: http://lorrainenelson.weebly.com/index.html
Posted by Elyzabeth M. VaLey at 6:13 PM