Happy Wednesday everyone! I'm participating in today's Silver Flash and continuing with this untitled work. If you don't remember where we dropped off you can read chapter 1 and 2 here and here.

Remember to visit the other fantastic flasher's! (links at the bottom) 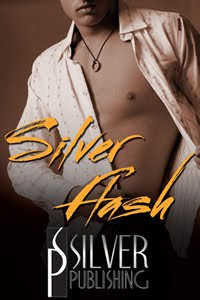 Damian lowered his head to her face. He was inches away from her lips. Amanda knew she should do something to stop him but she couldn’t. She stood powerless to his masculine appeal. What’s more, she hated to admit it, but she wanted him to kiss her.

His lips were tantalizing and the heat from his body was intoxicating. Her breath hitched. She swallowed hard. This was not a good idea. He was her neighbor, her enemy, the one that didn’t let her read in peace. She put a restraining hand on his chest. He stopped, glancing into her eyes. The heat coming from him was scorching her hand, raising her awareness of what she was doing. She splayed her fingers, reveling on the feel of his smooth skin and the few scarce hairs that dusted his chest. His hand snaked around her waist and he pulled her closer. Amanda looked up at him.

“I don’t think this is a good idea,” she blurted.

Damian raised his eyebrows. She felt his muscles tense underneath her fingers and she wanted to bite back her words, but it was too late. She’d already put her foot in her mouth.

Amanda scratched her nose with the back of her arm and turned away from the window. The last time she had seen Damian had been a long time ago, more than two years ago to be exact. That’s when the real trouble had begun.

Amanda screamed along with her friends as the first chords of one of her favorite songs blasted through the karaoke’s bar speakers. She laughed and used her fist as a pretend microphone as she mouthed the words to Elton John’s and Kiki Dee’s song “Don't go breakin' my heart” which a group of men were badly imitating on stage.

Suddenly her friend, Anne, nudged her on the ribs.

“What?” She lowered her head so she could hear her friend above the noise.

“That hunk in the corner hasn’t stopped staring at you.”

Amanda raised her eyes and quickly lowered them. It couldn’t be. It could.

“Tell me what he looks like,” she said, grabbing her friends arm and turning her back on the boy while dancing with her friend.

“What?” Amanda turned around sharply. She watched the man walk to the stage. Her innards felt like jelly. She hadn’t seen that boy, no, man, since the summer before last when he’d almost kissed her. A base and guitar mingled in the air, then the sound of drums. Her attention was drawn to the stage. Damian stood center stage. She held to her beer bottle as if it was her only connection to life. Damian had let his hair loose. It wasn’t the messy strands she recalled but a silken curtain that hung halfway down his back. He was fitter than she recalled, seemingly having finally spread out in all the right places.

She realized with a jolt that the voice she was hearing was his. Had it been that deep and husky two years ago? Damian got down from the stage, singing and swaying his hips to the infectious melody of Alice Cooper’s Poison. She had to get out of there.

It was too late. Damian was before her, his blue eyes piercing through her and causing her blood to boil while he sung the lyrics to the song:

“I want to love you, but I better not touch (Don't touch)
I want to hold you but my senses tell me to stop
I want to kiss you but I want it too much (Too much)
I want to taste you but your lips are venomous poison”

Before she could conjure something intelligent to say, Damian winked at her and went back on stage for the grand finale.

“What? Are you nuts?” Anne admonished her. “Amanda, you haven’t gotten laid in about a century and that hunk has it hot for you, what—“

“What is wrong with you?”

“Nothing, it’s just I don’t want to stay here anymore.”

“Don’t you like the guy? Because if you don’t want him I’d love to give him a shot.”

A very masculine voice spoke from behind her. Amanda jumped and turned around. Her eyes found Damian and she blushed.

“That’s not what I was saying, Anne was just misinterpreting my words.”

Damian raised his eyebrows in a skeptical expression.

“Yeah, well, I don’t need to explain to you. We’re leaving.” Before she could turn around Damian grasped her wrist.

Silver Flasher's of this week