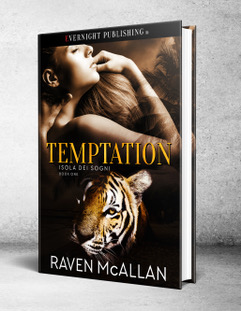 Hi, Raven here. Thank you so much for offering to host me today. I’m about dancing on the ceiling, as I’m very excited about the fact Temptation the first book in my new series, Isola dei Sogni is now available from Evernight Publishing here
(You can get it on Amazon, and from other eBook vendors as well.)
Although it’s sort of a rerelease, because several years ago I had two short stories out about Isola dei Sogni, an island where dreams and fantasies come true if you let them, it’s new as well.
When I got the rights back, I knew the stories needed to be longer and with a bit more of an impact. I hope I’ve achieved that. Once I’d played round with them, and thought them better, I subbed them to Evernight, who, quite rightly decided now book two Temptation would make a better book one. The other story Impulse is now book two and will be released in March.
(I hope that’s not confusing.)

So Temptation is ready to be read. I do hope if you decide to give it a go, you enjoy it as much as I enjoyed writing it. I had a blast.

Blurb~
An island where dreams and fantasies come true?
Unheard of.
That’s what Meryl thought until someone showed her the brochure.
Dare she?
It was all well and good until the one person she didn’t want to see was there. Ready, willing and able to give her those fantasies.
Marloth couldn’t believe his eyes when the one lady he truly loved appeared on Isola Dei Sogni. Was this his second chance to prove his love for her?
Now he just had to get her to believe in him, and that they had a future together.
Being a shifter wasn’t going to help. He’d need all of his human skills to achieve his heart’s desire.

He stared at her with narrowed eyes but stayed silent. If he spoke and she replied in any way except polite, he’d end up shifting, and there’d be hell to pay. Shifting in front of guests—even those who knew you were a tiger-shifter—was a big no-no. He wondered if any guest had asked for a fantasy where they were faced with a shifter shifting. If they had, he’d never heard of it.
Meryl reached the side of the boat and waited until he leaped onto the jetty beside her to help her aboard. Her perfume surrounded him, and Marloth wanted to howl at the sun. She was his. Nothing had changed there.
She smirked, took his hand, and paused before she stepped on to the boat. “Thank you.”
He bit back what he wanted to say—why are you here?—and nodded.
“Cat got your tongue?”
That was it. He snarled aloud, and his teeth showed very much tiger-style. “It might get yours if you don’t behave. You came, you asked for the fantasy. So, by God, you’re getting it. Get on.” He held his hand out and after a long moment when he thought he might have to manhandle—or cathandle—her on board, she nodded.
“Yeah.” Meryl let out a long sigh. “Sorry. I’m a bit stressed out. I saw the picture, but decided I was hallucinating. After all, the last time I saw you, you were loping across the field behind my house, and I was shit-scared you’d be shot as the big cat of the Trossachs.”
Actually, the last time you saw me was much more recent than that. He chose to keep his mouth shut about that meeting. “That could have been difficult, I admit. But we were somewhat overtaken by events. Visitors as we were about to say goodbye. Shit timing. Your expression was to tell me to scat-cat, and I had no chance to shift. No.” He put his hand over her lips and felt her soft, warm breath feather over it. “It’s over now. Let’s try and move on as best we can.” Damn, if it didn’t hurt to say that. It wasn’t true, not for him, and if he were honest, he had no intention of letting it be over. He would sort things out—he had to. “Why don’t you sit down and let’s get off to your atoll. It’s about twenty minutes.” He didn’t say he could do the trip faster if he tried. The less time she was on the atoll, the less time he would have to concentrate solely on her, and Marloth wanted to think and plot. Then concentrate on her.
Meryl nibbled her top lip, and then nodded. “Okay.”
Marloth opened a small fridge and gave her a bottle of water. She took it and twisted it between her hands.
“Thank you.”
“Welcome. Keep your liquid intake up. It’s going to be a scorcher. Do you have cream on?”
Meryl rolled her eyes. “Duh, I might come from the land where most tans are of the spray variety, but I’m not stupid. I do know how many beans make five. Factor forty actually.”
“And put that into your pipe and smoke it, smart-ass.” Her thought came to him loud and clear.
“Good girl.” It seemed she’d either forgotten his gift of hearing her thoughts or wanted to tell him what she thought.
“Add patronizing ass to that.”
He chuckled. “Yeah, whatever. Lifejacket under your seat, life raft’s next to me. So, let’s go.” He moved swiftly and cast off the boat. Meryl watched him without moving her head. He was very conscious of the way she used her eyes to follow his every move.
“You know, you’re really graceful, aren’t you?” She sounded surprised. The admiration in her voice sent a shockwave of hot splinters into his cock. Oh shit. That was all he needed, to be turned on by her so easily. But it had been like that before. One look from her, and he was hot, hard, and raring to go.
“I’m a tiger. We are.”
She looked bewildered. “Eh?”
“Graceful,” he elaborated.
“Oh, right.” She looked anywhere but at his face. Her gaze skittered over his crotch, and he watched the blush flare over her chest and cheeks. Well, his prick was pushing against his linen trousers and turning them into a tent.
“You do that to me.” He tried to sound casual and failed dismally. “Turn me on with a look. I could, all so easily, drop anchor, drop trousers, and drop you onto the deck.”
Her eyes widened.
“But I won’t. You want me, you tell me.” He checked the compass and altered direction slightly. “It’s over to you now. I know damned well I could persuade you to make love, but I’m not going to. When we make love again, it’s going to be because you instigate it. Your chance to show me what you want and how you want it. And I’m going to lie back and let you.”
“Hell, you’re awfully sure of yourself, aren’t you? What if I say never?” Meryl spoke so casually, he wondered how on Earth could he think she had feelings for him.
“Because I need to. I need to have faith and hope.” He laughed, though he felt like crying. “If you say never, I’ll be single, sad, and alone.”
******