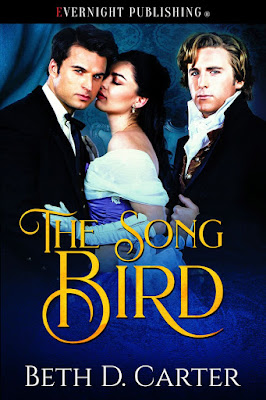 1. Why did you choose to write ménage? What intrigues you about this particular genre?

I love writing about the dynamics between two men learning to share a woman. Some stories jump right into a ménage but I think it's more fascinating for the men to grow into the love and all the sidesteps they have to take to reach a HEA.

2. Tell us about your latest ménage, The Song Bird: what’s it all about? Where did you find the inspiration?

I got the inspiration for this story after a vacation in San Francisco. Set a few years after the gold rush of 1849, in San Francisco when the city grew too fast for the local law enforcement to keep the peace, many citizens decided to take matters into their own hands. The largest vigilante group grew and the end result was the hanging of eight men.

3. In your opinion, what makes a good ménage novel?

Believability.  Living in a ménage relationship is hard work so there has to be a dance of some kind to figure out how it all works.  Human flaws have to be worked in and resolved in an organic way. You can’t have insta-love and a HEA without breaking something along the way. Know what I mean?

14. Tell us about your future projects.
I have two books in my publisher’s hands, waiting on a yea or nay verdict. One is a time travel where the hero travels back to 1927, told from his POV, and the other is a short story about a hired bodyguard. Fingers crossed! 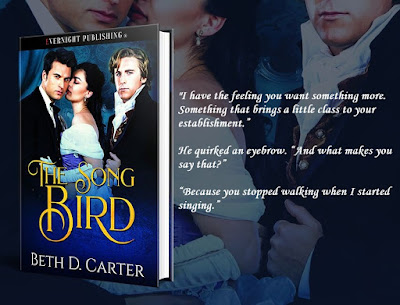 Blurb:
Avilon Chambert travels to the wild city of San Francisco to find her missing sister.  All she has is a letter explaining she’s in terrible trouble and that she’s been working as an upstairs girl in a club owned by two handsome men, Eli Masters and Jason Braddock.

When she arrives at the club, the only way she can get to talk to them is by auditioning for the singing position, and she captivates them by her beautiful operatic voice.  But the answers to her questions are vague and filled with holes, rousing her suspicions.

Her arrival at the club seems to set off a chain of events filled with danger.  As she searches further for her sister, she unleashes the wrath of a madman bent of revenge, threatening to destroy everything and everyone she’s come to love.

“If you two love each other,” she finally said, licking her lips, “then show me.”
Confusion clouded their eyes.
“What do you mean?” Eli asked.
“Kiss him,” she ordered and pointed to Jason. “Love him. Convince me the emotion is real.”
The bedroom was suddenly filled with heart-pounding tension. Eli’s body hardened, the muscle of his jaw tightening. Jason’s eyes narrowed as he regarded her warily.
“How far do you want us to take this?” Eli asked softly.
“If you want me to be comfortable with you, to trust you, then you need to trust me,” she answered equally as soft.
That must have been the right thing to say because in the next instant, Eli reached for Jason, sinking his big hand behind Jason’s neck to pull him into his body. Their lips met, crashing together in a bruising kiss.
Their bodies gravitated toward each other. She watched Eli grab Jason’s hips and pull him into his body. They were equal in height and stature, but Eli simply oozed dominance. Both men ground against each other as if they couldn’t get close enough.
Hands roamed over hard abs, seeking. Clothes started to shift. Layer by layer was discarded as the room became thick with passion. Avilon watched them. Her heart pounded, and her blood boiled. She felt her feminine folds become slick as their hands traced over sleek muscles and tempered strength. Eli’s cock jutted hard and proud from the smattering of dark hair that surrounded the base and traveled up to form a line that rode the center of his tight abdomen to furl across his chest. A heavy sac rested at the apex of his thighs, almost begging to be fondled.
Jason gently grasped Eli’s large cock, taking the clear fluid leaking from the tip to rub into the shaft before pumping his hand up and down. Then he replaced his hand with his mouth, holding on to Eli’s hips as the bigger man buried his hands in Jason’s hair to guide him up and down again and again.
Eli’s gaze met hers, holding her captive within its brilliant lightness. “Touch yourself,” he told her.
“What?” she asked, startled.
“Touch yourself,” he repeated. “Use your fingers to rub your pussy, tease your clit. But watch us.”

I like writing about the very ordinary girl thrust into extraordinary circumstances, so my heroines will probably never be lawyers, doctors or corporate highrollers.  I try to write characters who aren't cookie cutters and push myself to write complicated situations that I have no idea how to resolve, forcing me to think outside the box.  I love writing characters who are real, complex and full of flaws, heroes and heroines who find redemption through love.  I love to hear from readers so I’ve made it really easy to find me on the web:
https://twitter.com/BethDCarter
https://www.facebook.com/bethdcarterauthor
https://www.instagram.com/bethdcarter/
http://bethdcarter.blogspot.com/
Amazon author page:  http://www.amazon.com/BethD.Carter/e/B00EOTD1T0/ref=sr_ntt_srch_lnk_1?qid=1385417145&sr=8-1