Thank you so much for having me on your blog today to talk about my latest release, Woman as a Foreign Language. WaaFL came out last September, and has had some really wonderful reviews since then.

This is the story of Julian, a cross-dresser with a heartbreaking past of rejection and discrimination and the girl who finally heals his heart by falling in love with both sides of him, Julia and Julian.
I have always been fascinated by gender fluid characters, in part because I can somewhat relate to their experience, in part because they seem to be more “complete” (and courageous) human beings than most. There was a premonition of Julia/n already in Black Carnival, my debut novel, but that was a much more fetish-y story altogether.

WaaFL is a much more intimate book, with a very minimal setting. Although I think of it as set in the UK I didn’t assert it, not did I pick a town. I wanted the readers to think of these two people as closed in their own universe, as they truly are, in many ways. Nina is an autobiographical character, but with all the focus being on the characters it became a challenge to write Julia/n at such close range. I had an idea of what I wanted him to be from the start, but it took a lot of research to flesh him out. This is Romance and it does not need to be a documentary, but at the same time I didn’t want it to be totally unrealistic. I spent about three months reading tons of articles, blogs and forum posts by both cross-dressers and transwomen to learn as much as I could about their experience, from tucking to dressing to dating. I met some amazingly generous people who shared the most intimate (really intimate!) information with incredible verve. I hope I have done them justice. I certainly wrote Julia/n with immense love and respect, and I hope you feel like meeting him/her in my book!

I was so attached to these characters, that once I was done with the boo I realized I still had a lot to say on the topic. All this spill-over turned into Spice and Vanilla, WaaFL darker, naughtier, whip-and-leather sister, which will be published in May. It’s not WaaFL’s sequel, but it treats similar themes, and Julia/n and Nina both make a brief appearance. Stay tuned! 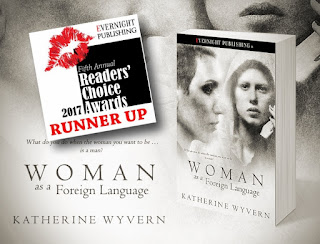 Woman as a Foreign Language was Runner-Up for Best Contemporary story in the Evernight Readers’ Choice Awards, and is available on the Evernight site at a 25% discount with the coupon code WINNER2017
**** 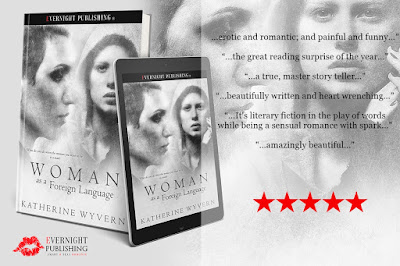 “…I absolutely loved this book. The writing is beautiful, the language perfectly suited to each point-of-view, and the characters wonderfully damaged. At its core, Wyvern twists the usual gender/genre expectations…”
“…Nina is a young woman whose abusive childhood has made her afraid to fully own her femininity. And Julia and Julian are two souls in one body—or perhaps they are the same soul, just reflected in different ways. At first Nina’s attraction to Julia—Julian dressed en femme—seems like a adolescent girl-crush. But then it deepens into love, with some of the most gracefully written and heartfelt erotic scenes I have ever read.”
**** 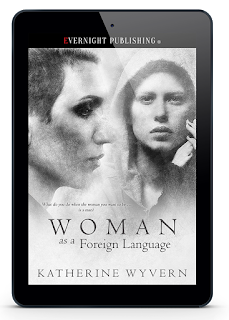 Blurb:
What do you do when the woman you want to be … is a man?

Nina’s abusive childhood left her feeling so vulnerable when wearing anything flimsier than combat boots that she has spent her whole adult life dressed like a gang boy. But when she meets the tall, glamourous, charismatic Julia (actually her cross-dressing neighbor, Julian, going out en femme), Nina is seized by an overwhelming and terrifying urge to finally express her own femininity.

Julia/n has not only a slightly split personality but also a thoroughly broken heart. What s/he wants most is a partner who will love both Julia and Julian. While Nina learns from Julia how to be a woman, Julian discovers that they might well be made for each other, but it will take a struggle against prejudice and a whole conservative mind-set before they can follow their hearts, and express their true, unique, and beautiful selves.
**** 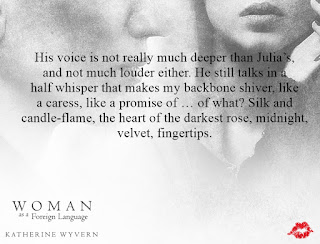 Woman as a Foreign Language at Evernight (with excerpt):
http://www.evernightpublishing.com/woman-as-a-foreign-language-by-katherin-wyvern/

You can also find an exclusive excerpt on my website, here:
http://meetingivory.wixsite.com/katherinewyvern/copy-of-woman-as-a-foreign-language