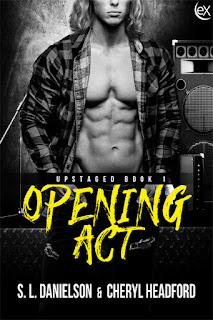 Blurb
Wannabe singer and band front man Erik Von Nordgren hates snarky brit Asher Berkley with a passion. From the moment he turns up at practice with his twin sister Daisy, who is one of the band the two have hated each other.
Through a series of 'tit for tat' incidents they annoy, frustrate and exasperated each other. The die hard goth with purple eyes and the hard core rocker with dreams of the big time have nothing in common and no need to cross paths. Except to wind each other up.
Until the day that Erik throws Asher in the school pool, when everything begins to change. Erik is so far in closet he's in Narnia and Asher has a dark past and trust issues that stand in the way of any relationship, let alone one with the brash American who hurts him every time they try to get together.
A relationship doomed from the start, or so you'd think.

I know you probably get asked this a lot, but how did you guys get together?
Erik  It was all kinda karma ya know, Billy's been a drummer forever, so we kinda hung out and did the duet thing, then Joey showed me up on guitar, and it just all kinda fell into place
Billy: I've always been drawn to music, and my best friend being a singer, it seemed totally right. We hung out and like he said did the duet thing; and Joey and Daisy totally rock on their strings.
Joey: I met these two a couple years ago in the freshman talent contest. We'd hang out and kinda mess around, but didn't get serious until pretty recently. Daisy just joined.
Daisy: What can I say? We uprooted from a small town in the UK to this crazy place and I was kind of lost. Then I met Joey and my world lit up. (She drapes her arm around Joey’s neck and they bump foreheads)  He introduced me to the sweetest guy in the world and his kind-of-dumb, but rocking best friend and the rest is history. I love to play and to get to play with my best friends is like a dream come true.
So, why grunge?
Erik: Oh man, that's been my thing from the second I heard it. Kurt Cobain, dude. He was the bomb! I'd watch that video like a million times and got it all down by heart. Such a wreck.
Billy: Totally, I watched with you sometimes. The drummer was awesome.
Erik: Man, the vocals though...it hit me bang on. So yeah, I've loved it from second one.
Billy: which got me into it, and here we are...grunge band reboot
Joey: I’m along for the ride. I’m not a particular fan of grunge, I love all kinds. (Shrugs) It’s all cool.
Daisy: I’m playing the long game. I’m going to get Erik singing pop before we end. (cracks up laughing at the expression on Erik’s face) Psyche!
Who would you like to perform with/open for?
Erik: Ha! Damn....Zeppelin? That would've been sweeet. Dude. Metallica? Any of those older classic rocks bands. I'm not sure about opening...
Billy: Dude, you are so a throwback. (rolls his eyes) no way. Alternative, Coldplay, Imagine Dragons, hell I love Zeppelin too, if I could be like Bonham
Erik: I'd absolutely do anything with Nirvana
Billy: Natch. Me, I'm open. Hell, Katy Perry, Lady Gaga, Adam Lambert.
Joey: I'm down with that. Just lemme play guitar like Jimmy Page and we're alll good.
Daisy: Ah man, I’d kill to perform with Flyleaf, but I’ll take Katy Perry or Gaga. Maybe one day I’ll get to perform with Lily Allen but I’m not taking any of these scruffy dogs with me.
Erik: Hey!
(Daisy laughs and sticks her tongue out at him.  Erik punches her lightly on the shoulder)
Joey: Hey, hands off the lady, dude
(Daisy hugs him and kisses his nose.)
Daisy: Down boy. I love that I’ve got my very own guard dog.
Joey: (Kissing Daisy on the lips) Woof Woof.
Who’s your celebrity crush?
Erik: Aw man… I’d say Brad Pitt. That Thor dude, too, Chris Hemsworth
Daisy: I have to agree on Chris Hemsworth. He’s smokin’ hot, but he’s funny too. A nice guy, not just pretty.
Erik: Gotta love that Nicole Kidman too. Her style rocks. I wouldn’t say no to a bit of that.
Daisy: (slaps his arm) Keep it clean, meathead. We’re on Facebook.
Erik: (rubs arm) Aw… okay, okay, whatever.
Billy: Sweet. For me I like redheads like me, so Dohmnall Gleeson, Ewen MacGregor
Joey: My Daisy is the only girl I see.
Daisy: (kissing Joey) Aw you’re so sweet. I’m so sorry, honey, but if Andy Biersack turns up and starts singing to me you won’t see my arse for dust. I know, I know, Black Veil Brides are Asher’s taste not mine, but wow that voice. I’m sure I could get him to sing just about anything I want. (She winks at Joey who mock pouts then grins)
What’s your dream?
Erik: Huge crowds of raving fans and filled stadiums!
Billy: Shocker! I'm good with huge crowds of fans too, the drummer is usually hidden, so I'm up for a little recognition. (gets elbowed in the arm) ok
Joey: Aw man, I'd love signing autographs, big cheesy smiles for photos, living the dream life with my buds and my babe, a lot of recognition. (smiles)
Daisy: For now I’ll just take being settled and happy. It’s been a tough couple of years and I just want to take a breath and play. Although…if things happen I’ll be just as happy to unsettle again, as long as it’s for the bright lights and big time.
Well, thank you everyone for answering so…er…honestly. It’s been very nice to meet The Von. Congratulations on your launch, and hopefully we’ll be seeing more of you very soon.

Author Bios
S L Danielson
S. L. (Stephanie) Danielson began writing at the tender age of five. She knew it was her calling from the moment she put pen to paper. In her teens she began writing alternative works and the genre stuck. She created ever more elaborate tales and finally in her early 20’s years began to create works with her new love; male/male romance. She has since written more than 30 works (both solo and collaborations).
Stephanie is classically trained in business, accounting, and HR/training, possessing both an undergrad and graduate degree. She also owned and operated Romance First Publishing where the ultimate goal was to help other unknown, as well as known authors get their start in the publishing world.
Beyond writing, her other hobbies include: painting, gaming, and spending time with her husband and two cherished cats.

Cheryl was born into a poor mining family in the South Wales Valleys. Until she was 16, the toilet was at the bottom of the garden and the bath hung on the wall. Her refrigerator was a stone slab in the pantry and there was a black lead fireplace in the kitchen. They look lovely in a museum but aren’t so much fun to clean.
Cheryl has always been a storyteller. As a child, she’d make up stories for her nieces, nephews and cousin and they’d explore the imaginary worlds she created, in play.
Later in life, Cheryl became the storyteller for a re enactment group who travelled widely, giving a taste of life in the Iron Age. As well as having an opportunity to run around hitting people with a sword, she had an opportunity to tell stories of all kinds, sometimes of her own making, to all kinds of people. The criticism was sometimes harsh, especially from the children, but the reward enormous.
It was here she began to appreciate the power of stories and the primal need to hear them. In ancient times, the wandering bard was the only source of news, and the storyteller the heart of the village, keeping the lore and the magic alive. Although much of the magic has been lost, the stories still provide a link to the part of us that still wants to believe that it’s still there, somewhere.
In present times, Cheryl lives in a terraced house in the valleys with her son, dog, bearded dragon (called Smaug of course) and three cats. Her daughter has deserted her for the big city, but they’re still close. She’s never been happier since she was made redundant and is able to devote herself entirely to her twin loves of writing and art