Happy Sunday, lovelies!
Today I'm sharing a last snippet from Alpha's Alpha, as I've got another upcoming release on the 17th of this month. (My collaboration, Hitman's Angel, in a new Evernight Anthology, Lawless).
EDJ has been absolutely crazy this past week and Nanowrimo is suffering as I'm only at 7K. Still, better than nothing and it's helping me get Max's Desire (Alpha Protectors 3) in order. How is everybody else doing?

~ ~ ~ ~ ~
Lee cracked his knuckles and rolled his neck. His vision shifted and adrenaline pumped through his veins. He stepped out of the enclosure and into the club. Nothing, except him, had changed in the minutes they’d been together. The music blasted, people danced, drank, and partied oblivious to his and Alkaline’s life and how their moment together would transform their lives forever.
Lee scanned the crowd. It took him less than a minute to spot Alkaline. His lips twitched and he laughed aloud. To think he’d always considered lions one of the greatest predators on earth and now, here he was about to hunt one down. 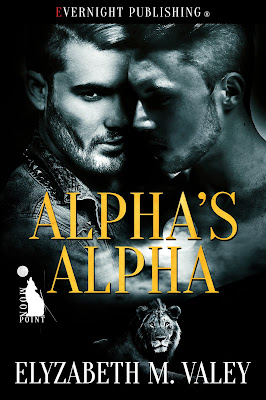 Lee never thought he’d find his mate at a club, but even less so, did he expect him to be, Alkaline, the leader of the mafia organization known as the Claws. If the lion shifter were not an alpha, things might be easier, but as it is, his mate is bent on keeping them apart. Not that it matters to Lee, he’ll hunt him down and make him his.
Alkaline doesn’t do sweet. Nor vulnerable. Nor submissive. So when his lion decides that his soulmate is an alpha puma, he refuses to accept it. After all, whoever heard of two alphas mating? However, resisting Lee is harder than he ever imagined.
With two men battling for dominance, who will end up on top? And will their romance survive the match?
Available at