I'm back! It's taken me a while to get back into the gist of things, but I'm here again. LOL Today I'd like to share with you a snippet from my story, Hitman's Angel, part of the upcoming Evernight Publishing anthology, Lawless.

Colt watched the old man from the shadows. He followed the same routine every night. First, switch on the lights to his office while undoing his tie. Then, close the door and leave his briefcase near the right leg of his desk.
The mini bar came next. A glass of scotch downed in one gulp and another one to sip throughout the night while he worked.
Colt smirked. His victim would never look through the window, behind the curtains. He’d never check to make sure he was alone. Safe. People never did. They were always careless, blindly assuming the world they lived in wasn’t out to hurt them, oblivious to the constant threats surrounding them. Colt had learned from a young age that danger lay everywhere. In the streets. In your home. It didn’t matter.
His target sat on the worn leather chair with a groan. He placed the glass on a coaster, then picked up his case and drew out his reading glasses and some documents. With a sigh, he set to work.
Colt’s fingers tightened around his weapon. He focused on his breathing and the sound of his heart in his ears. It was steady, calm, counteracting the tension in his muscles. He peered from behind the curtains. Aimed. 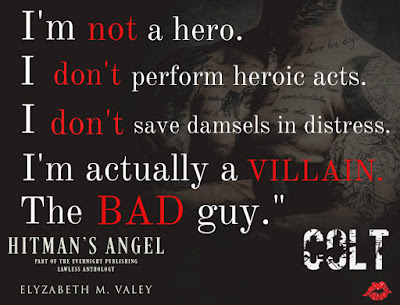