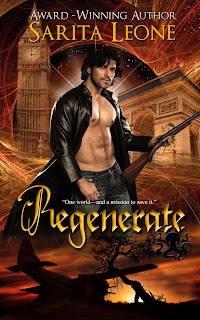 Happy day, everyone! Today I've interview author Sarita Leone and we're having a look at her latest release, Regenerate! Plus, she brings a $25 Amazon Giftcard Giveaway with her!

The Octopus isn't an urban myth—and its agents are anything but ordinary. The intelligence bureau is so well-hidden most doubt its existence. A handful know its location. And fewer walk the halls in the subterranean compound.

Benjamin Sinclair didn't ask to be a scientific miracle but every mission has its risks and one perfectly-placed bullet ended his life—for a brief moment in time.

Nicole Anima battles demons every day. Life as a paranormal resources operative gives her tortured mind a rest—and keeps her from contemplating her own death.

When Anima and Sinclair partner on a globe-trotting race to eliminate the threat about to cripple humanity, all hell breaks loose. Leaping from planes, crashing into continents, dealing with voodoo priestesses, and running through jungles with zombies hot on their trail doesn't leave much time for romance, but this duo somehow manages to sizzle.

Two agents. Telepathic mind paired with regenerated commando. One world—and a mission to save it.


Did you have to do any research? Tell us about it.

There was a great deal of research that went into writing REGENERATE. Personal experience gave me insight into stem cell study and transplant. One of the agents, Benjamin Sinclair, who works for the super-covert government agency, The Octopus, has been regenerated. That is, using stem cells he has been brought back from the dead, making him the world’s first invincible, immortal superagent. So that knowledge was the impetus for this story.

Sinclair and his partner, a beautiful psychic named Nicole Anima are assigned to thwart an effort to tumble the global economy. They continent hop at a dizzying speed, so some of my research included geographical and cultural topics. I was able to send them to a few places I’ve visited so I drew on my own knowledge to write about Paris and the French countryside but writing this book allowed me to vicariously visit Africa, Belgium, Venezuela, and a few other intriguing spots!
Because they are agents for the government, I did some checking on tactical and weaponry issues. Fortunately, I’ve got three ex-Marines in my life and each was eager to help.

How did you choose the title for this work?
REGENERATE seems natural, because by definition it means to regrow new tissue to replace lost or injured tissue—which is exactly what brought Agent Sinclair back to life!

Hollywood is going to make a movie out of your book! Your dream cast would be:
Oh, I love this question! Natalie Portman would portray Nicole Anima’s strength, fractured heart, and determination beautifully. And I can think of no one better to play Ben Sinclair than the Game of Thrones heartthrob Kit Harington. He’s so…well, what a hunk and he can definitely play strong roles!

Why are we going to love your hero/heroine?
Nicole Anima is strong yet vulnerable. She doesn’t back down, give in, or give up. She’s been hurt but doesn’t let that define her. And Benjamin Sinclair? He’s become an invincible killing machine who underneath it all is still a man with a heart that has been claimed by a woman who hates him for hurting her.

If the book is part of a series. What’s it about? When will we see the next installment of the series?
REGENERATE is the first book in a series about The Octopus and the way the super-covert government intelligence agency battles wrongdoers across the globe. The next book features Agents Anima and Sinclair once again waging the good vs. evil war against a faction that mortal military could not eradicate. It is a fast-paced adventure but it also deepens the relationship between the agents. They face obstacles not only in the global sense but also in the interpersonal sense. I’m enjoying writing this book—it’s scheduled to release in December 2017.

Are you a pantser or a plotter?
Combination of both, actually. I have an idea in my head and write, but I keep a book journal as I write so I can refer back to plot points or details.

If you could work with any author, who would it be?
I’m not sure about working with, but speaking with would be enough. And it’s Stephen King. I would just like to hear about his writing life.

How many hours a day do you dedicate to writing?
My writing hours vary because I have a word count that I make my daily goal. Once I hit the word count (usually at the end of a chapter) I am done with new writing. Unless, of course, I’m on deadline. Then, I put in as many hours as it takes.

Do you have a writing schedule?
My writing schedule is simple. I sit down with my first cup of coffee and work until the word count is met. In the evening I generally revise or edit for an hour or two.

Even perspiration couldn’t keep the hair on the nape of her neck from bristling at the sound of Sinclair’s deep voice. Rising to his bait wouldn’t get her anywhere. Neither would angering him, but on that score she didn’t care.

“I won’t do it.” She forced her parched throat to swallow. Straightening, she fisted a hand on her left hip and spread her legs. The shooting pose came naturally. “I refuse. I don’t work for you—and I won’t work with you. Never again.”

“Why would it? The never concept only works for humans.”

Her blood pressure felt higher than it had when she’d been running full out.

“Now, don’t get yourself all worked up. It won’t do you any good, and somewhere deep inside that gorgeous body of yours, you know it.” He paused, then chuckled again. “I can help with that, you know.”

The sudden turn in their conversation brought her guard down.

“Satisfaction. I can satisfy you…if you’ll let me. Jagger makes a good song but he sure can’t give you what you want.”

Facts ran in her head like a movie on high speed, reminding her of crucial bits of information about the man on the other end of the phone. Practical ones like how he took his coffee. Black, no sugar. Emotional facts, regarding his family. He didn’t have any. All killed in a horrific airplane crash in the Ecuadorean jungle. Logical details about his illogical existence.

So many things, yet she’d forgotten one of the most basic. His scientifically enhanced mind. Three minutes, and already he’d snared her in his web. 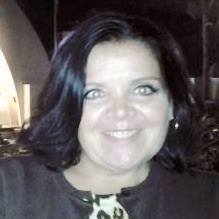 Sarita Leone is an award-winning author who has written romance in many forms including Regency, paranormal, and contemporary. She loves happily-ever-afters in any setting!

When she’s not writing, Ms. Leone spends her time hiking, learning languages, and traveling. She loves adventure and can pack a suitcase, grab her passport, and hit the road in less time than it takes to peel an apple!

Sarita will be awarding $25 Amazon or B/N GC to a randomly drawn winner via rafflecopter during the tour.