Hey lovelies, today I have author Tyler Robbins with her latest release, A Beautiful Lie, here with me. Her title reminds me of that 30 Second to Mars song and it's video which was shot in Greenland, but I think her story is more on the hot side *wink* 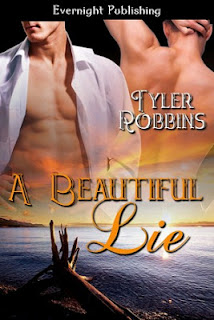 Jesse Reagan has had more than his share of tragedy, and he may have been dealt another blow when, once again, cancer threatens the sister who raised him. Faced with the possibility of being left behind, Jesse vows to care for her young son, though he’s not convinced he can.

When Trip Cantrell returns to town, he’s blindsided the instant he’s reunited with his kid brother’s lifelong friend, Jesse. His inability to find happiness in the years he’s been gone, suddenly makes sense. Love’s been waiting at home all along.

Life begins to look promising, except for the fact that neither have come out of the closet publicly, and that’s not even their biggest problem. Someone has a secret so shocking they may never find a way past it.

Will they be accepted in their small Texas town, or will secrets, lies,and the threat of tragedy destroy everything?

We both know you want to read the excerpt... (beware of the language)

Jesse lay back on the dock with his hands folded under his head and one leg crisscrossed over the other at the ankle. He wore a pair of black swim trunks, flip flops, and a navy blue t-shirt, the usual lakeside attire.

Trip eased up, enjoying his uninterrupted view. As he reached Jesse, his shadow cast a dark void that blocked the sun from Jesse’s upper torso, including his face.

Jesse looked back, and sprang to his feet the instant he saw Trip standing there. “Oh, hey.”

“Yeah. Had a lot of stuff to do.” Jesse reached down and picked up a red, plastic gas can.

“Too busy for a goodbye?” Anxious knots twisted Trip’s insides. A first time for everything.

Trip nodded. “Yeah, more than I bargained for, that’s for sure.”

Jesse swayed from one foot to the other. He’d yet to look Trip in the eye, which only added to the tension mounting between them.

Jesse shrugged. “I’m cool.” His voice kicked up an octave, giving his reply an air of indifference.

“Cool.” Trip folded his arms across his chest, suddenly feeling awkward as f*ck. “Well, I wanted to see if you’d be up for a ride out to the island later today.”

Jesse squinted as the sun cascaded across his face. He covered his eyes with his hand. “I don’t know, man. I have a lot to do around here.” He sloshed the can of gas and started to walk past Trip.

Trip raised his hand and gently touched Jesse’s chest. “I just want to talk.” He spoke barely above a whisper.

“Trip, if Eric finds out—” Jesse shook his head. “Why are you doing this?”

“Why am I doing this? Jesse, something happened. Something I can’t explain.”

Jesse drew in a deep breath. “I’ve got a lot going on right now. Having my best friend find out I f**ked his brother is the last thing I need to deal with.”

Trip tugged at the hem of Jesse’s t-shirt. “I have as much to lose here as you, but if I don’t see you … and I mean alone, and face to face, it’s gonna drive me f**kin’ nuts.”

Jesse scanned the area around them then gently nudged Trip’s hand away. “I can’t make any promises, but I’ll try.”

“That’s all I’m asking.” Trip instinctively leaned in for a kiss, but checked himself before getting too close. He ran a shaky hand through his hair instead. “I’ll be on the island before dark.”

Trip swallowed a mass of air clinging to the back of his throat. “Don’t worry. I know how to be careful around my brother.”

Jesse pushed past Trip and continued toward the store.

Jesse turned back, took another good look then gave Trip a partial smile. “Yeah.” He opened the door and disappeared inside the bait shop.

Trip closed his eyes, savoring the scent of Jesse’s cologne, thankful for the smile, no matter how small it was. Tonight, given another chance, he’d memorize every inch of Jesse Reagan.