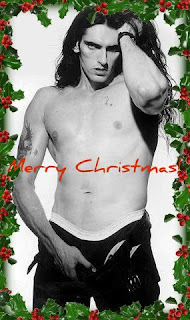 Merry Christmas Everyone!!!
Here's a little spicy gift from me to you!

Oh Christmas Tree
Hannah tried not to panic. The Christmas tree was on fire. No big deal. All she had to do was throw something atop the damn plastic fir.
Nope that definitely did not help. Her hands began to shake. Get help. Yes, her mind was still functioning. She threw open her door and pummeled on her neighbor's front door.

"Help, my Christmas tree...," she began to explain.

In three strides, Maxwell had grabbed his fire extinguisher, run to Hannah's house and turned off the small fire.

"Whew, it was lucky I had that extinguisher huh, Hannah?" Max did not turn to look at her. He had already seen more than his body could take when she bashed against his door. All in a single glance, even half asleep as he had been, he had noticed that she was scantily dressed: a burgundy colored robe that was open and revealed tight black pajama shorts and a matching tank top. His mind and certain parts of his anatomy had registered the fact that she was not wearing a bra. Max licked his lips remembering the view of her hard nipples stretching the thin tank top. For a moment, he thought he was having one of his recurrent dreams in which Hannah finally contemplated him as something more than the friendly next-door neighbor. Unfortunately, he had smelled the burnt plastic and realized that it was no dream. A sniffle brought him out of his reverie.

Max turned around. He found Hannah staring dumbly at the grotesque burnt plastic and the gaping black hole on her rug. Unable to stop himself he went to her and placed a hand on her shoulder. Hannah turned to look at him, tears in her eyes.

"My first Christmas alone and it's ruined," she whispered sadly.

"Well, just because you don't have a Christmas tree," he began.

"It's all ruined Max," she wiped her tears away angrily. "I try to be positive, to make pretend that things don't always go wrong, but I have a hole on my floor, a deformed tree and my whole apartment smells like burnt plastic."

"You can come sleep at my place if the smell bothers you." The words were out of his mouth before he was even aware that he was saying them.

Hannah stared at the mess again in silence. Her apartment stunk and she knew that if she stayed she'd lay awake the rest of the night trying to clean out the mess and pondering why her life was so miserable and why she was so damn shy that she couldn't stand on her tip toes and kiss Max, like she'd been wanting to do almost from the moment they met a year ago.
Max softly pressed Hannah's shoulder, trying to encourage her to make a decision.

Hannah shivered from head to toe at the sudden contact. She glanced at Max, and her breath caught in her throat. How could she not have noticed he was wearing nothing but his pajama bottoms? Moreover, she could almost perfectly see the outline of his...

She glanced up at Max's face that was waiting for her to make a decision. Finally, she nodded.

Max smiled. "We'll open the windows so the smell can filter out and you can come over. By tomorrow morning it will be gone and we can pick up this mess."

He went about opening the windows as Hannah stared after him. She felt her pulse quicken as she saw his muscles move beneath his skin, opening the windows, drawing back the curtains. Her breath hitched in her throat as she imagined herself going to him and hugging him from behind. She would press herself against his back and snake her hand across his firm stomach, then lower until she found the waistband that held back his cock. Then she’d…

Max felt her shiver beneath his hand. Quickly, he passed a hand through his hair. It was the only thing that he could do to stop himself from picking Hannah up and ravaging her with a kiss.

“Why don’t we head over to my place, you seem to be cold.”

Hannah nodded. She grabbed the keys and followed Max outside and into his apartment.

“Would you like something to drink? A hot cocoa, maybe some coffee, or,”

Hannah laughed. “That’s all right, Max. I don’t need anything. Is that your Christmas tree?”

She walked over to the living room, where a medium sized tree glowed with fairy lights and red and silver ornaments. I don’t need anything except you, she thought. Fortunately, she had spotted the Christmas tree and had been able to change subjects.

“Yes, it’s much prettier than mine,” she replied laughing, Hannah turned to look at Max. Her breath caught in her throat. He stood at the entrance to the living room, leaning on the doorframe, the glow of the Christmas lights, lighting up his features. A red light would shine on his shoulder length brown hair, a green one would make his eyes seem feline, a white light would outline his square jaw, another red one, would highlight the hard plains of his hairless chest, another light would make his stomach sparkle. Hannah forced herself to look up, as she did, Max turned to look at her, and Hannah gasped. His green eyes raked over her body and landed on her face, desire clearly written on them.

Max stayed near the door. He was suddenly aware how close Hannah was to him, and he was afraid that if he got much closer his body would deceive him. Then he had seen her standing before the Christmas tree, admiring it with a smile that could melt any man’s heart. He tried to avoid looking at her when she felt her eyes on him, but inevitably he had turned and it was then, seeing her large brown eyes scanning him, and that darn robe falling open again, that he acted.

Before Hannah realized what was happening, Max was upon her. His arms circled around her waist and pulled her to him. His lips found hers and crushed them. Max yearned to feel every part of her petite frame molded against him, but overall he wanted to taste her mouth. He licked her lips, gently prying them open. As soon as she allowed him entrance, he pushed inside, beginning a savage dance with her tongue.

Hannah moaned. Her tongue was wrestling with Max’s, and her body was firmly pressed against his, brushing against the hard shaft that had aroused between them. She felt on fire, as his hands began to caress his way inside her robe.
Without releasing her mouth, Max helped her remove her robe. He pulled her shirt up and fondled her breasts.

A pool of desire began to build inside Hannah. It started at her mouth, made contact with her breasts which prickled underneath Maxwell’s attention, and finally landed at her core.
Max, liberated her mouth and lowered his head between her breasts. He proceeded to lick them and then, finally, he placed her hard nipple into his mouth, suckling on them with hunger. Hannah moaned again, as she curled her hands around Max’s hair, encouraging him to suckle her harder.

Max lowered his hands from her waist to her firm bottom. He gripped one firm globe and then the other, but he wanted more of Hannah. He pulled off her shorts, and fondled her moist lips. Another moan from Hannah, encouraged him, and he inserted a finger in her wet center.

Hannah began to buck against Max’s finger, but it was not enough. The movement of his hand only made her ache for him to increase.

Maxwell rose and looked at the woman before him. Her short black hair was disheveled, her mouth slightly open was red and lush, and her eyes were hazy with desire.

“I want you now,” Hannah managed to say.

She knew she did not need to say anything, her body betrayed her. She had never wanted any man as much as she wanted Max at that moment. However, his scrutiny of her was driving her wild. She wanted him in her and she could tell that he wanted the same.

Hannah threw of her shirt, then, locked her thumbs on the rubber waistband of his pants and tugged down. She heard Max’s hiss of air as the cold air hit his aroused member. She smiled and proceeded to lower his pants. She finally looked up at him when she placed her small hand around his thick shaft. Hannah licked her lips. Max stared down at her, his eyes bright with lust. Hannah bent forward, ready to lick and suck on the delicious meal before her.

“Not now,” he growled. Stooping down, he picked her up. Immediately, Hannah entwined her legs around him, ready to feel her wet core completed.

He marched with her to a nearby cupboard, tugged open a drawer and pulled out a condom.

“Thanks,” Hannah said as she helped him unroll the plastic wrapper. Max gave her a grin that set her off again. She pulled him close and nibbled his lips, while her body, with the help of his hand against her buttocks, found the way to settle against him.

Hannah moaned loudly as Max pushed her against the wall and entered her. In agonizingly slow strokes, he began to push himself in and out of her.

“Don’t,” Hannah murmured in frustration. She kissed him, and grinded herself against him, increasing the tempo to a wild ride.

Max groaned. He felt Hannah’s nails rake his back, her vagina walls contract against his cock, and her cries of delight as she reached her orgasm. He bit her neck as he too reached completeness

They lay together on the floor, as if in a daze, bathed only by the soft glow of the Christmas tree’s fairy lights.

Max caressed her face with tenderness.

“Do you have any idea how much I’ve wished for this?” he shook his head and smiled.

Hannah took his hand and kissed it. She held it to her cheek. “Probably not as much as I.”

Max kissed her and looked up at the glowing Christmas tree. “I’m glad your tree burnt.”

Hannah laughed. She looked at the beautiful fern. “Me too. Hey, what’s that?” she asked, noticing a small package with a red ribbon around it placed under the tree.

“I don’t know. I did not leave any presents under the tree.”

Hannah stretched out her arm and grabbed the box. She brought it closer to the light.

“You didn’t but Santa did,” she laughed, as she read the tag.

Max brought her to him, and grabbed the box. He too began to laugh.

“I guess nothing escapes Santa, huh?” He kissed Hannah as he momentarily tossed aside the packet of condoms which they would surely be using.
Posted by Elyzabeth M. VaLey at 1:02 PM