The time has come to share a snippet from a new story! Reine's Salvation (Alpha Protectors I) is very close to publication, so I thought I'd introduce you to the characters.

In other news, I'm Nanowrimoing! I'm running a bit behind on word count, but hope to catch up. *gulp*

UPDATE: If you were here earlier, you might not have seen it, but this morning I got the final cover image for Reine's Salvation! Have a look! *swoon*


Reine's vision clouded as he recalled that last mission. It had been chaos from the beginning. Their numbers were small compared to those of the Inferum, the Sin’s minions. His group had separated as the Sin launched a major offensive. He had run down what seemed an endless hallway, fighting for his life, attempting and failing to find a way out until he found the room. Reine shuddered. His life had changed forever when he stepped into that dark place. A tremor crossed his body. No, he had to stop thinking about that day.


“Breathe, Reine,” he whispered to himself. “Focus.” 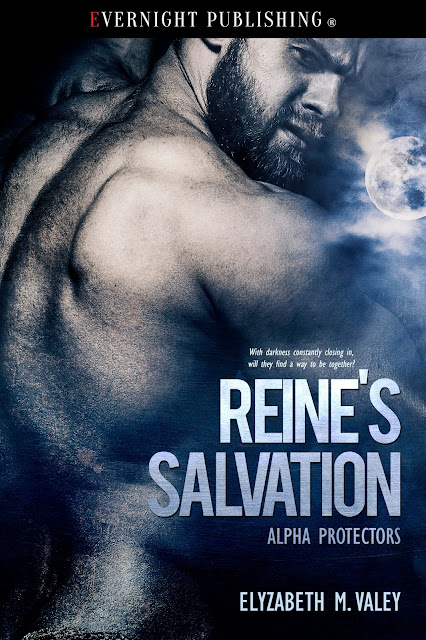 
A Guardian’s purpose in life is to protect humanity and the delicate balance between good and evil.

Reine has lost everything: his wife, his friends, his ability to fight and his identity as a Guardian. There is nothing left for him except a world of anger and bitterness, where happiness is unattainable. At least, that’s what he believes until he meets an intrepid waitress.

He’s the kind of man her mother warned her to steer clear from.
Mystique is happy with her current life, but for many years she struggled on a path of self-destruction. She knows she shouldn't get involved with the brooding hunk at the bar, but how can she stay away when his sorrowful gaze is so compelling?

The attraction between them is immediate, but while Reine can’t let go of his past, Mystique is not willing to return to hers.

With darkness constantly closing in, will they find a way to be together? Or, will Reine's behavior destroy their future?