I'm back with the reluctant pirate, Rodric, in his search for his friend Fergus.  The prompt I used is the jungle picture below.

If you don't remember what happened in the last three chapters, you can read them HERE.  (Scroll to the bottom). Otherwise, read on and enjoy! And as always, don't forget to read the other stories of this week's fabulous flashers!

“Is it far?” Rodric asked, pushing another hanging vine out of the way. He wasn’t sure how long they’d been trudging through the unwelcome land. The air was stuffy and humid, the smell of rotting vegetation making breathing a complicated task. Sweat poured down his back and he waved off the insects buzzing near his head. He scratched his head. Not only did he have to deal with lice, now he smelled like a pig. Rodric sighed. 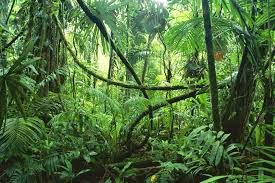 Arjä twisted her head to look at him. A small smile played at her lips and her eyes shone with mischief. Rodric frowned. That playful glint was the same Fergus had given him before he’d disappeared. Nothing good came of it then and he could warrant that nothing good would come out of it now.


“Listen, I demand to know—“ The rest of his words were forgotten as he followed Arjä behind a curtain of trees. His jaw dropped. He stood at the crest of a hill and before him, a new world extended. Gone was the wild jungle they had been traversing, in its stead a grassy plain teaming with life.

Arjä’s tinkling laughter sounded close to him, but he paid it no heed, the sight before his feet mesmerizing. The sunlight that had barely filtered through the thick trees of the jungle poured over the field, bathing everything in a warm yellow glow. In the distance, a body of water glittered. A loud neigh made him turn to his left. His eyes watered as he witnessed a group of unicorns and centaurs race through the fields, their long manes billowing behind them like a banner.

Arjä took his hand, breaking the spell he seemed to have fallen into. Rodric looked at her, confused.

“Do you see the trees in the distance? That is where we’re going. Come, they wait for us.”

Rodric nodded and allowed her to lead him. He was speechless. Never in his life had he seen such a marvelous sight as the one that lay before him. For the first time, he understood why the Unicorn race wanted nothing to do with men. The race of men was destructive. They could build, but in their fore they always left a trail of death and destruction. If any man was to discover the paradise that lay behind the jungle, there would be no Unicorn people and the beauty of the land would fade to become only a myth, the dream of a writer who once imagined there could be such a place. He followed Arjä down a worn path, taking in every detail. The wind ruffled the grass, making it dance like the ocean out on the sea. Butterflies spread their wings across the tall grasses and birds cawed and chirped overhead, flying in peace. Trepidation clawed its way into him. Why was he being allowed to see all this? He recalled Arjä’s earlier words: you shall swear secrecy and fealty. Fear raced down his spine as he became aware that if he did not do as the Unicorn people asked him he would die this day.

He recoiled, forgetting that Arjä was still holding his hand. She turned to look at him, her blue eyes searching his face. Suddenly, she smiled.

“Have no fear, Rodric Belavue. We mean you no harm.”

“I wouldn’t be so certain,” he managed to croak. Rodric cleared his voice. “This, this land, you don’t show it to anyone that arrives on your beach.”

“Of course not. Only those worthy can see the land of the Arvynen.”

The unicorn woman threw back her head and laughed gaily. “Aye, any man that travels the world to recover his,” she paused, “friend, is worthy of us. Besides,” she added with a cryptic smile, “we’ve heard things.”

Rodric shook his head and willed his feet to move behind Arjä.

“What things?” Good Gods what had Fergus told them?

“You’ll learn them soon enough,” she said as they reached the edge of the looming forest.

Now, read the rest of the Flasher's stories and/or check out our page:
Wednesday Briefs Fiction