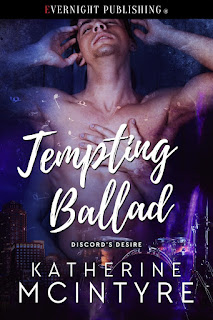 One hot night together was all Renn and Leo shared, and neither expected to see the other again.

However, when Leo Kincaid shows up after one of their gigs on the other side of the country, Renn’s intrigued. When Leo produces information on Renn’s missing sister, he’s ensnared. Leo needs an alliance from an Unseelie family, a rival to those who kidnapped Renn’s sister. It’s enough dangled bait to ditch the band, and the sparks between them are immediate and incendiary.

On their own, they don’t stand a chance of retrieving his sister, but luckily for him, his bandmates aren’t the giving up sort. Together with the Discord's Desire crew, they prepare for a fight against one of the most dangerous Unseelie families. However, spending so much time around Leo Kincaid is dangerous. Renn finds himself wanting something more, which breaks the pact he made long ago: never get attached.

Renn slipped around to the side, his shoulders heaving, and he stopped still.

Leo Kincaid leaned against the brick wall, his silhouette sharpened by the inkspill shadows. From where Renn stood, he got a perfect view of the prominent chin, the slightly crooked nose, and the sensual lips bordering on cruel. He’d slipped out of his suit jacket and rolled his sleeves to the elbow, revealing corded forearms and the tendrils of a tattoo.

Renn sauntered toward him, his entire body lighting up in the presence of this man. Kincaid didn’t even have any sex mojo like him or Ky, so why his body reacted like this was pure mystery.

Kincaid lifted a cigarette to his lips, and Renn exhaled loud enough to shatter the quiet between them. Those spotlight eyes turned his way, and his mouth dried at the sheer power behind the man’s presence.

“Ditch the cigarette,” Renn said, hooking his thumbs through the belt loops of his patched-up leather pants. His Doc Martens scuffed the asphalt as he closed the distance between them.

Kincaid’s lips pursed, amusement gleaming in those eyes. “Oh yeah? Any reason I’d give a damn about, or do you just feel like being bossy?” His deep bass rumbled through the air, and Renn sucked his lower lip through his teeth. He’d murder someone to hear that voice whisper dirty things in his ear.

Renn reached out and grabbed him by the lapels of his button-down. “Yeah, because I don’t want to fucking taste an ash tray when I make out with you.” This close he caught the scent of rosewood and bourbon, a blend he hadn’t been able to replicate since their time in Vegas. If he hadn’t been turned on before, his erection could be used as a battering ram now. And he hadn’t even tasted the guy yet.

Before Renn could lunge in for the kill, Kincaid’s fingers wrapped around his neck and those hungry lips descended. The firm grip, how the man didn’t just kiss, he devoured—Renn couldn’t get enough. He gasped into Kincaid’s mouth, sinking into the kiss as he tasted the sweetness of bourbon on his tongue. Most of the time when he dove into his post-concert hook-ups, Renn took the lead, but with Kincaid, he might as well try to rein in a tsunami.

If he were honest, he preferred it. Renn melted into the man’s grip, the pinch at his nape hard enough to bruise. He leaned against him, the feel of Kincaid’s rock-hard body enough to rev his motor. His fingers slipped to the buttons of Kincaid’s crisp black shirt. The man grabbed his wrist, stopping him still with an iron grip Renn had sorely missed. A grin tugged at Renn’s lips even as he continued kissing him. At any moment, his bandmates might stroll out and catch them together and he knew for a fact they’d be pissed.

Posted by Elyzabeth M. VaLey at 6:00 PM No comments:

Happy Sunday, everyone!
I'm on vacation! Which should mean some writing, but to be honest, it hasn't happened much. I've worked on some edits for an upcoming release and been lazy.
Nonetheless, I'm sharing another snippet from my current (still) untitled WIP. I've skipped ahead a bit to when Oliver, our vampire hero, is taken into one of the rooms in the clinic.
Have a great day!
Ely

The nurse didn’t respond, silently leading him to a tiny room, barely little more than a broom closet. The space held a medical gurney, a stool, hand sanitizer and tissues.

Oliver sat on the stool and sighed. Long gone were the days where a man could run free. The time when their lives had been swathed in magical appeal. Once, not too long ago, vampires had been creatures of awe. Now, it had all vanished into emptiness. Life was slowly becoming a thrill-less ride. The beauty of watching society grow, change, morph into something more, had vanished. Life had merely become an act of survival. Sure, he had friends, acquaintances, enjoyed the little things, but whenever he came into a clinic, the four walls surrounding him made despair claw at his chest.

Catching the sound of footsteps, Oliver glanced at the door. It opened with a low creak, the cold white light shining on his brunette. His fangs prickled and his flesh tingled, every inch of him aware of her presence.

At least today, luck seemed to be on his side.