She’s back! *dances* It’s been a while but I finally have the fabulous Raven McAllan settled in a comfy chair with her favorite drink, a nice South African Simonsig Chenin Blanc, and ready to answer my November questions as well as introduce us to her latest release,  Peregrine’s Prize, book 5 from the Behind Closed Doors series and giveaway a little something *wink* Read on! 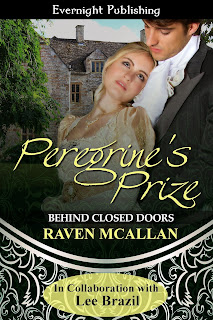 They called him Prosy Perry.

Anyone who really knew him—like Maggie did—understood that was a façade to protect his secrets.

When danger threatened his family, and his lover, he dropped the role and the real Peregrine emerged.Now all he had to do was unmask the traitor and live happily ever after.

Was it going to happen or was he destined to be alone again?

Welcome Raven!
Hi there, oh and I brought Gluten free crackers and pate for us. We might as well have a party…

I’m curious, in a previous interview, you told us that you’re not a plotter but, correct me if I’m wrong, but the Behind Closed Doors series is a collaboration with author Lee Brazil. How does this work?

He plots, I fly by the seat of my pants. Seriously we have a rough outline of the series, in that we know how it starts and finishes. Then we fill in the middle. Lee is incredibly organized, I'm not. But it works. There's a lot of facebook messaging, and 'Oh hey can you remember posts'.

Where did the idea for the series come from?
Tequila (Lee) Gin (me) and a Friday night Fb chat. (I've admired Lee's work for ages.) I think I said something like we should so write a Regency series and he said why not. We spoke again the next night, (before the Tequila and Gin,) and roughed the series out. You know, an idea of what it was all about, characters, what they were like and who would write about who. As we are very different writers it just worked, and you know? I think we compliment each other.

Have you had to do any research for your novels? Tell us about the process.

How –if at all- have your personal experiences affected your writing? Cite an example if possible.

No No nano. The mere thought brings me out in hives. It would kill the creative juices! It just wouldn't work for me.

In a few words, what are we going to love about Peregrine’s Prize?

Perry! Maggie! Mystery! Completion! As we're getting toward the end of the series gaps and explanations are becoming known and explained. Mind you each book can be read as a stand alone, and is a complete story.
Please share one flaw and one asset of your hero and heroine from Peregrine’s Prize

Perry worries too much, and takes on too much without sharing it. However he is loyal and loving.

Maggie is impetuous, but will do everything needed to protect those she loves. And I mean everything.
And finally, what can readers expect next from you?

Well I have the first in a series called Miss Simpkins' School coming out on 22nd. So that’s two books in two days, I do it every time rolls eyes Miss S—Flora is the first about a 'school', where seduction's the game, and success is the aim. And Athol ( from Master) is slowly revealing his complicated life and history to me. I must admit, it's going to be a tear jerker, heart stopper, so I have been putting it of. I'm about 16k in so far.

Cold November…
A book recommendation for November - Apart from mine? ( Peregrine's Prize Evernight Publishing, and Miss Simpkins's School—Flora Breathless Press) The Crimson Rope, a hot hot hot anthology from Evernight. And yes okay I am in that!
One thing about Fall that you love – scrunching through crisp, dry, fallen leaves.
One thing about Fall that you hate – squidging through floppy, wet, fallen leaves.
Christmas is around the corner…have you started getting ready yet? Cite an example if yes Well I've bought a gluten free Christmas pudding and sent Santa my Christmas list.

www.ravenmcallan.com
Thought I'd pop that in :-)
Thank you so much for letting me visit. Speak soon I hope.

It's always a pleasure, Raven!
Hey and because we've had such a great time, I have a copy of either Master or The Wager to give away to one commented who comments as to whether they prefer Regency or Contemporary, and why. Oh and hey if they have both of those I'm sure we can sort something out :-)
Posted by Elyzabeth M. VaLey at 12:00 AM