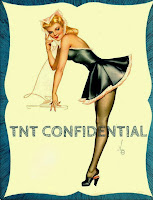 Greetings and welcome everyone to today’s TnT Confidential! As I promised you earlier in the month, I have author Iyana Jenna back here with me with her latest release A Single Black Rose. She's also come with a giveaway! Wohoo!

Before, she showed us the cover, now, she’s going to introduce her to the story and her writer's mind... dig in! *wink* 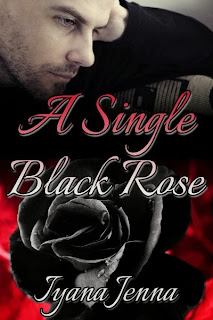 When actor Sean O’Reilly receives a flower bouquet containing a single black rose on set, he assumes they’re from his boyfriend Nate. But they aren’t. Flowers keep arriving for him after that, each with a black rose in the arrangement. Soon other things arrive as well, such as photos and a recording of Sean’s voice. As the number of flowers dwindle with each bouquet, Sean begins to worry they’re supposed to be some kind of a countdown ... but to what?

Fan Gene Scott worships Sean. He maintains a blog dedicated to the actor and writes out all his fantasies there. He wants Sean to belong to him, and only him, and he’ll do anything to make the actor his own. He can’t accept the fact that Sean has a boyfriend. To Gene, Nate might as well not exist.

Despite increased security and all efforts to keep him safe, Sean vanishes, and Nate feels as if his world has come tumbling down. When the police response is too slow for him, Nate enlists the help of his producer and bodyguard to find Sean. Will he manage to find his lover before Sean disappears forever? Or will Gene finally get what he’s always dreamed of, and make Sean the love of his life, instead?

Available here: JMS Books
Welcome back to In A Dream Beyond, Iyana! It’s a thrill to have you and your new release here today.

Hi Elyzabeth, I’m delighted to visit your blog again. I just hope your readers won’t be bored with me. ^^

By the way, you have such tough questions! I’ll try my best.

First of all, the idea for this wouldn’t come up if not for an actor I liked so much. Can you say I’m evil? Perhaps yes, because I imagined how it would like to be a fan who became so obsessed with their idol that all they wanted was to make the idol theirs and theirs alone. I have a journal where I talk most about my idols. That’s why I made the evil fan in this story have a journal where he wrote his imaginations, being with the idol, etc.

Most novels are written in the third person point of view, but this one isn’t. Why? How was the experience?

I’d say this one still uses the third person but perhaps with a more personal perspective so you’re more like being inside the people’s heads. The use of journal like mentioned above also helps give you a more personal point of view.

The process was a lot of fun! I wrote per chapter and showed it to my betas who were totally sweet and helpful. I also had someone (*coughs* my sister *coughs*) who made a banner for each single chapter I finished writing. All with a black rose in them.
Did you have to do any research?

Oh yes. I definitely did a lot of research for this, about the places, what might be inside a very disturbed person, but the thing that I liked most was when I was looking for the meaning of a black rose. The things you came across when you Googled it…

What’s your favorite part of this book?

I loved my main character so my favorite parts were any scenes where he was in. ^^ My poor dear.

I think they are flowers I like most. But then I don’t really like flowers in general. LOL.

In one sentence, why are we going to love this novel?

I have to apologize if this is not your idea of romance, but if you like a bit dark stories with (literally) tortured characters, I hope you will like it.
What can readers expect next from you?


-          Hopefully in December, my next Romance on the Go story will come out from Evernight Publishing. The title is This Isn’t Goodbye.


-          Scheduled in January 2014, my second short story with JMS Books will be out and the title is Misunderstandings.

A book recommendation for November – Safe by C. Kennedy

One thing about Fall that you love – I don’t have Fall here so I’m not really sure. But I do love Fall color.

One thing about Fall that you hate – I don’t know what to hate since I’ve never experienced it. :D

The earliest you’ll start getting ready for Christmas is… Not celebrating Christmas either. ;)

If you celebrate Thanksgiving share an anecdote with us. I know I don’t celebrate Thanksgiving, either, and this is not an anecdote. But I love to give thanks together with my students. I did it several times in class. I turned off the light and lit up a candle, and I asked the students to one by one say thanks to anyone and anything they felt thankful in their lives. It was so touching. Some of us ended with wet eyes when I turned the light back on.

Get in touch with Iyana at:

And now, please enter the Rafflecopter to win the prizes!

Or follow this link if the one above doesn’t work:

Gritting his teeth, Nate hisses under his breath. He is standing in front of a cop, giving his statement on what has just happened. Not that there's much to say. His mind keeps replaying that scene when Sean turned to him, his face ashen, and Nate wishes with all his heart that he was the one who had opened the door, the one who found the flowers instead of Sean, sparing him the shock of seeing the seemingly innocuous pink bouquet with its single black rose.

Nate is angry with himself,


feeling like a failure even though he knows what happened wasn't his fault. There was no way he could have predicted that the pervert was going to put the flowers inside their SUV. He runs his fingers through his hair, ends his statement, and turns to go to Sean who is sitting slumped on the pavement with Osborn by his side. Sean is staring ahead of him, his face expressionless, his hands clenched tightly into fists. Osborn is talking to him but Sean seems to not be aware of him, or of anyone else around him for that matter.

A man stops in front of Nate, a reporter, judging by the tape recorder he holds in his hand, and Nate feels his temper rising. This is so not the time for an interview and how in the world did the media get to hear of this so quickly anyway? Fucking reporters.

“Scott, Eugene Scott from The Vancouver Daily." The man is tall, almost as tall as him, and Nate rarely meets someone who is the same height as him here in Vancouver. "Are these the first flowers Sean got from the stalker?"

“We don’t know if he’s stalking Sean or not.”

“But it’s obvious that he is, right?”

Nate frowns, looking at the reporter more closely, "No, it is not obvious that he, or she, is stalking Sean."

“No, they’re not,” Nate cuts him short. He really wants to get this over with without being downright rude.

“These are not the first flowers.”

“You know, if there's something strange with the flowers or --”

“They’re just flowers, okay? Look. I’m tired and I really don’t have anything more to say. If you'll excuse me." Nate walks past Scott, going toward Sean who is still sitting at the same spot, alone. Nate glances over at Osborn who is now with the police, presumably giving his statements to them.

"Sean," he says softly as he sits beside Sean on the pavement. He puts his hand on Sean's knee, stilling it.

Nate turns his head toward Sean who is looking even more agitated than before.

"Hey, man.” He puts his arm around Sean's shoulders, pulling him close, kissing him on the temple. He can feel Sean shaking. "I've got you."

“They found a picture,” Sean says abruptly. "Inside the flowers. The police showed it to me."

“What picture?” The police didn't say anything to him about that. Nate's stomach sinks. Sending flowers is one thing but pictures? Of Sean?

"It's one of me. Sleeping. Inside the house." Sean's voice is bordering on the hysterical now. "Whoever it is must have used a long-lens camera or something. How could they get through the gate, Nate?"

"Ssh, baby.” Nate tries to put as much reassurance as he can in his voice. Someone has to remain calm even though Nate is feeling anything but. He puts both his arms around Sean, can feel him trembling, and holds him even tighter. "Breathe with me, c'mon."

Sean stills and takes a deep breath. “Can we go home now? Have the police finished with us?"

"Yeah. Yeah, I think we can go home now." Nate stands up and holds out a hand to pull Sean up. They hold each other tight for a moment longer, both of them unaware of a pair of eyes watching them from a distance.