I am super thrilled to welcome M.A. Church to In A Dream Beyond! Especially after the scare she gave us back in October.
M.A. has visited this blog several times before, but she’s a slippery one and has managed to escape my questions all this time. Today, however, there’s no running away. Welcome M.A. and her latest release- already number 8 in romance-science fiction at Amazon.com:  The Harvest- Taken book 1. 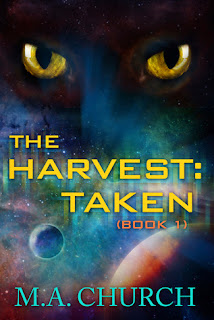 In the year 2050, humanity finds out they are indeed not alone.

Massive space ships appear without warning above the capital cities of all major nations. The planet Tah'Nar is dying. Chemical warfare has reduced the once-intersexed warrior race to sterility. They need fresh DNA in order to reproduce and have an idea for a harvesting program... and so they turn to Earth.

Earth governments negotiate a lottery, and Dale Michael assumes he's safe since he's under the Harvest age limit. How wrong he is. He's illegally harvested and claimed by Tah'Narian starship captain Keyno Shou. From the moment Keyno sees Dale, he knows he must claim the spirited human male for his own. What he doesn’t expect is a spitfire with a mind of his own—and a deadly disease that will require a risky procedure to cure.

Order your copy at Storm Moon Press or Amazon.com

Greetins M.A., inquiring minds want to know: When did you start writing and why?

I started writing back in 2010. My mom was ill, and one night I was surfing the web looking for something to read since I couldn’t leave her alone. Well, I stumbled across a site called Literotica. There I found gay male stories and fell in love. After a few months of reading, I decided what the heck, I’d give it a try and wrote Darkness Awaits. Not long after, a publisher contacted me and that was that, lol. My first story was published. As I was going through edits, I started writing The Harvest and other stories put up there. Finally, I removed them and sent them to publishers. J

Have you had to do some research for your novels? Tell us about it.

I spent a lot of time studying and talking to folks about the Greek gods for my The Gods series: Priceless, Perfect, and Pure. I also did a lot of research into cougars when I wrote Shadows in the Night. And I buried myself in American Native culture and myths, lol. That was lots of fun, actually. Well, reading about some of the things that went on then wasn’t so great, and I used that in book two.

A lot of your characters are non-human. Why this preference for out of this world beings?

I love the freedom, lol. If I want a character to shift into a black cougar… I can. Never mind there isn’t such a thing as a shifter… or a black cougar. I enjoy world building, which can be a pain at times, but to create something new is challenging.

Your most recent release, The Harvest: Taken is divided into two books that took you about a year to write. What was the writing process like for these novels? Was it a conscious decision to work on such a large project?

The story got its start on Literotica, and I wrote it chapter by chapter. Now, my chapters were about 20K long, or a short novella, lol. I didn’t plan for it to be that long, it’s just Dale and the gang had a lot to say! Fact is, there are several lives that are touched on in this novel: Colt and Ti, Doc and John, Chad and Gibor. As you read the books, you get to know each couple and all their good times and bad.

Then you get to see some of the males have children lol. Yes, this is a m/m preg. But let me say that the process is *very* well explained and actually makes sense. I researched how certain male animals have babies, along with how certain sharks give birth. The whole story is based on DNA mutation. And wasn’t that fun to research, lol.

After your stroke in October, your life has undoubtedly changed, but do you think this will influence your writing in any way?

Seeing the word ‘stroke’ applied to me still throws me, you know? But yes, I *do* think it will influence my writing. One way is that writing isn’t the center of my life anymore. It can’t be right now. I have PT and doctor’s appt I have to keep, along with getting off my ass and exercising like I used to. There was a time that distractions annoyed me. All I wanted to do was write.
And I see where that got me. I still love to write, but now I take time for other things too.

Please tell us, in 3 to 5 words, why we are going to love The Harvest: Taken.

Your favorite line of The Harvest: Taken is:  When Dale tells John Keyno’s nickname for him is “Dammit, Dale.” Keyno tends to say that a lot. Here is that passage:

While Chad tried to explain what we were doing here, I moved a little closer to John. “Did I mention I have a nickname?” I wanted him to focus on me, and not the conversation between Keyno and Chad.

“You’re going to hear it any minute now.” Chad was losing the discussion with Keyno.

“Hold on—wait for it,” I smiled at John. About that time, Chad admitted that this was all my idea, while Doc tried to defend me.

“And there we go—my nickname!” I shouted, as though yanking a rabbit from a top hat. John looked at me in utter shock. I gave him a bland smile in return and jerked a thumb at Keyno. “Most of his sentences start that way when I’m in the room.”

And finally, what’s next for you?

Well, book two of The Harvest is under contract with Storm Moon, so that’s in the pipeline. In Jan/Feb, Wrapped in Leather is due out from Dreamspinner. It’s the first novel in a contemporary/BDSM series. Yup, I said contemporary lol.