Maybe it's the effect of Nanowrimo but I've actually written 13 more words than I should have this week. I hope our Wednesday Brief moderator forgives me *puts on innocent face*. The prompt I've used is the picture of the Unicorn, though the way this story is going, it seems that Rodric and his men will deal with the Unicorn race in much more depth next week.

For now, feel free to read or re-read chapter one and enjoy chapter two. How does Rodric escape the siren allure?

“So eager to find your friend, captain?” The siren leered.

“I don’t have time to waste, either help me or be on your way.”

The siren gave him a sinister smile. “We desire one of your men.”

Rodric swore loudly. One of the men? Of course. What else could a trio of witches want? His gaze sidled toward the men on the ship. They were a bunch of ragamuffins but they had obeyed his orders to the last word. Leaving one to the sirens was a death sentence. His stomach tightened into an uncomfortable knot. He looked back at the smirking siren, waiting for him to say something. Rodric straightened to his full height and grinned. Never show your enemies any sign of weakness was the first thing he’d learned in life. Women, were no exception.

“A man is quite a bargain for only a guess at where Fergus is headed.”

The siren blinked her fish eyes slowly. “Well,” she said, pausing to lick her lips in a seductive manner, “perhaps we can convey a little more information than a guess.”

Rodric frowned. He didn’t think the sirens had taken Fergus as a prisoner. Like him, the redheaded pirate resisted a woman’s allure quite well, especially, ones as dangerous as these. No, either the siren knew something more or she was toying with him.

“Of course.” She smiled affably. “I’ll leave you to discuss the issue for a few minutes.”  She winked and fell back into the water with a loud splash. Several of the men groaned sadly as she swam back to the outcropping of rock where her friends waited for her.

“Stop ogling and gather round, you bunch of loons,” he called out. “We’ve got urgent matters to discuss.”

A few of the men hurried to his side, but many stayed near the railings, watching the women as if in a trance. Rodric snarled under his breath. Darn band of make shift pirates. If Fergus wasn’t dead, he’d kill him with his own hands when he found him.

A few more men moved in his direction, but some had to be dragged by the arms by their comrades. Rodric cursed and looked toward the sea witches. They blew kisses and suggestively caressed their bodies to any that would watch. A trap to any red blooded male. Thank goodness they hadn’t sung. That had brought more than one major shipwreck through these parts of the world. Myth to many, the sirens were a deadly creature that lived on a man’s body and spirit. First, they’d drive him wild with desire, feeding off his maniacal frenzy to copulate and then, when he no longer had anything to offer, they’d eat him alive. Heart first. Rodric’s stomach churned at the unpleasant thought. To top everything off, they liked to scavenge the shipwrecks and pick up any gold and jewels they found to their liking. Rumor had it that they’re tails glittered so brightly because they were incrusted with jewels.

Rodric’s eyes widened as an idea occurred to him. It was a long shot, but it could potentially save the sailor’s lives.

“Miles, go downstairs and search the treasure trunk for the hair comb in the shape of a fish.”

“The one with the emerald eye, Captain?”

“Yes, yes, that one. Bring it wrapped in something, I don’t want the vixens to see it.”

“Oh, and bring the other one too,” he called out.

“Listen up, you poor excuse for sailors. Those sirens want to eat you alive.” Quickly, he explained his plan to the men. A loud splash warned him that their time was over. Returning to the railing, he clutched the large hair piece to his chest. His heart hammered wildly and he hoped that they wouldn’t have to recur to plan B: giving Derek to the sirens.

“Who’s going to be the lucky gentleman to join us?” the blonde siren said, with a little laugh. Her eyes scanned the boat, looking out for potential victims. “Perhaps him?” she said, pointing a webbed finger at Miles. Or maybe,” she licked her lips, “him?” Her eyes landed on the youngest member of their crew. The lanky boy called Mozart that screamed innocence. Mozart gave the siren a nervous smile and retreated a few steps.
Rodric coughed loudly, capturing her attention again.

“Neither. I think I have something you could enjoy more than one of my poor men.”

The mermaid gasped, her eyes lighting up with a perverse light.

“What sort of jewels?”

“The sort you can pin in your hair. The sort your friends will envy.”

“I can pin it in my hair?” She asked, clearly in awe that he should possess such a thing.

“Yes,” she hissed. Slowly, he unwrapped the bundle and allowed her to see it. The siren gasped, her greedy hands reaching for it, but Rodric was quicker.

“Where has Fergus gone?”

Her fish like eyes sought his. “I’ll never understand this thing you humans call friendship,” she muttered, eying the jewel. “We can’t say for sure. Details weren’t shared with us poor women, but we do know that his next stop was Arvynen Island.” 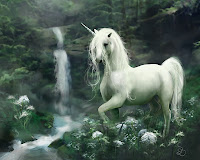 “Unicorn Island?” Rodric furrowed his brow in confusion. Why would anyone go to that place? The Unicorns kept to themselves and had a known hatred for humans.

The siren shrugged.  “I do not know the purpose of his visit. It was what the Captain of the ship said. Can I have my jewel now?”

Rodric cursed.  “Sure.” With a malicious grin, he tossed the object into the water. The hair piece flew in the air, the gold and jewels sparkling under the bright sunlight and catching the attention of the other two mer-witches. The object hit the water with a plunk. The sirens shrieked and lunged into the water.