"I'd like to make you an offer." A Dragon's Heart, A Demon's Blood #8Sunday #SexySnippets #WeekendWritingWarriors #paranormal #romance


I've been thinking about what new story to share with you guys. Not an easy decision. I've got several manuscripts I'm working on and have yet to decide what to focus on for Nanowrimo as well. With so much indecision, I've finally chosen a snippet from A Dragon's Heart, A Demon's Blood. Nothing like a snippet with a demon to get into the Halloweeny feeling that permeats the air. *wink*

Adrian Ormonde gazed at the woman before him: Zendaya, queen bitch of the demon kingdom. She was a remarkable sight––no mortal man could resist her, and few paranormal creatures could refuse her. When Zendaya posed her eyes on you, there was no escape.

Unfortunately, she had caught him. Adrian Ormonde, legendary bounty hunter. Throughout the years, his employers had been wide and diverse. He’d hunted down demons, dragons, vampires, nymphs … it made no difference to him. However, he’d never been summoned, let alone ambushed and caught, by such a highly placed employer before. 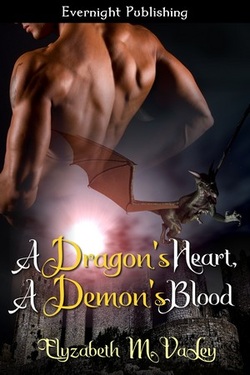 He is a shadow in the dark, smelling your scent and sensing your fear...

Legendary bounty hunter Adrian Ormonde is no ordinary man. His life is filled with secrets and questions, blood and lust. His only concern for 150 years has been survival and discovering the truth behind his demon-dragon nature.
Until he meets his new assignment: Victoria Green.

Victoria Green has felt eyes watching her every move ever since she can remember. Then, Adrian appears. The eyes vanish but new dangers arise as she falls for the mysterious hunter. Cast into an ancient conflict between dragons and demons, Victoria must trust Adrian’s skill to be enough to protect her from both the outside world and that which grows within her.

Chance brought them together but will love and passion be enough to keep them joined? Or will the other forces at play in the dragon-demon worlds destroy them forever?