Hello!  Thank you for having me today! I’m so excited to share my new release, Alpha Bitch, with you. This story was a bit of a surprise to me. I never expected to write a shifter story. Vampires, yes – I’ve got more than one vampire story in the unfinished files – but I learned early on not to fight my muse and just go with it. I have to say, I am quite pleased with the results.

I don’t know exactly where the idea came from. I can say that I was listening to a lot of Elle King, and the song Ex’s & Oh’s is basically Cassie’s theme song – it’s that “I don’t give a shit what you think of me” and “I’m not taking your shit” attitude that influenced the creation of Cassie. Currently there aren’t any sequels planned for this, but with being a shifter story, which involves packs, there are plenty of secondary characters to work with. So while it’s not a series at the moment, the possibility is there. I do have the feeling that there’s a story lurking out there, I just don’t know who it’s about, lol. 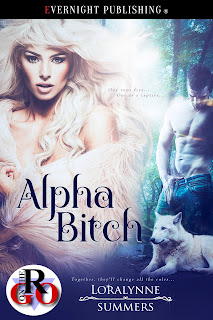 Blurb:
One runs free...
Cassandra Dumas is the Alpha of Stone Point, with no interest in bowing down to any man, let alone her fellow Alphas. At least, not until an accidental encounter triggers the mating bond. So when the High Council orders her to mate the heir of neighboring River Run, she is determined to find a way out of it to be with the only man she truly wants...
One is a captive...
Kieran Kimball is a caged wolf. Forbidden to shift, he chokes daily on his Alpha nature and serves Stone Point however the Alpha sees fit. Recently, he cares only to serve Cassandra. When she sends him away in advance of her forced mating, his world shatters. Until the unthinkable happens...
Together, they'll change all the rules...
Cassandra is nothing if not resourceful. Outsmarting River Run is just one piece of the prize to be won if she can pull off the coup of century while keeping everyone important still breathing.

Before she could convince her wolf to turn around—because she really didn't want to have to take control and force a shift, leaving her bare-assed while traipsing through the cool woods at night—Kieran came into view. He stopped short at the end of the path.
Her heart, among other parts of her body, warmed at the sight of him. Water dripped from his long hair and ran down his bare chest to disappear beneath the band of his jeans.
“Cassie,” he said, surprise evident in his tone.
Against her better intentions, she walked over to him and rubbed against his leg.
“You shouldn't be here,” he whispered. Regardless of his words, his hand traveled down her back, stroking her fur as she wound around him. If she were a cat she would have purred, the sensation felt so good. He smelled fresh and clean, as if he'd been bathing in the river. He fell to his knees, and she stood in front of him with her head resting on his shoulder.
“Do you need something?”
She whined in response and nuzzled him.
Kieran's arms came around her neck and he buried his face in her fur.
“We can't, Cassandra.” He pulled away and held the sides of her head gently, staring into her eyes. His own were nearly completely gold, as close as his wolf could get to the surface. “You have to go. You have to forget about me. Find another.” His voice was hard.
She whimpered, responding to the authority within him and nearly giving in to the command. The reaction both amazed her and pissed her off at the same time. Cassie's wolf shook her head and stomped a foot.
“Yes. Go. Now.” Kieran stood and stepped back.
Cassie shifted, heedless of her naked body, and stepped forward, reaching for him. Kieran's jaw clenched and he swallowed hard before turning his back on her.
“Go, Cassandra. It's for your own good, and the good of our pack. Go,” he said over his shoulder, entering his cabin without another look at her.
With an indignant huff, Cassie turned and stalked away, hoping he was taking a good long look at what he was rejecting.

About the Author:
As a child, Loralynne was always the student getting in trouble for talking in class and punished at home for making things up. Combining her ability to go on and on and her flair for storytelling, she naturally grew up to be a writer. Originally planning to write fantasy, her muse had other plans. Once she opened herself up to the whims of her muse, she couldn’t type her first sex scene fast enough and now writes romance. Loralynne lives in Upstate New York with her husband, cats, and children. You can friend her on facebook, follow her on twitter under LL_Summers, or check out her blog: loralynnesramblings.weebly.com

Other Published Works:
In Self Defense (contemporary romance, Evernight Publishing)

Coming Soon:
All That Glitters – Spank or Treat 2016 Anthology