Happy Thursday readers! Today author Tali Spencer is back but this time to tell us a little about her male/female romance and All Romance Ebook best seller,  Captive Heart.

Tali is giving away a copy to a commenter, so don't doubt it and leave a comment at the bottom to win! 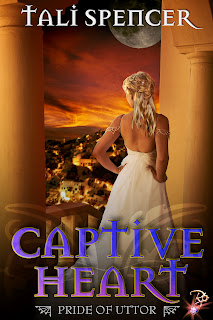 Gaspar bent a frown upon her. “I didn’t reject your sister because of her looks. She’s beautiful. All of you are so beautiful, it’s an offense to the gods that you have so much beauty and the rest of us have so little. I rejected her because I heard what she said—what all of you said—about my looks.”

“Oh.” Julissa could have winced, recalling.

“Your sister said I have a most unattractive visage and she would only enjoy herself in bed by imagining my cock as large as my nose.”

She flushed, because Ilona had said those very words. “Well, I never said anything like that!”

“Yes, you did.” He studied her unhappily. “My emissaries tell me, you know, what people say in reaction to my appearance. You said, ‘It is rather large.’ And you weren’t referring to my cock.”

“Well, it’s true!” Julissa refused to be cowed for her comment. “You have a large nose, Gaspar. It’s strong and bold and handsome. Why wouldn’t anyone admire it? From the moment I saw you, I thought it fine. But Gaspar, that portrait is hideous! Have you looked at it? It makes you look like a horse. I will not be held accountable for anything I said upon seeing that horrible likeness.”
~~~~~~~~~
Thanks, Elyzabeth, for having me stop by today. Again. I was just here the other day to talk about my other new release, Sorcerer’s Knot. This time, I’m giving away a copy of my M/F romance, Captive Heart, and talking about the joys of having a less than perfectly handsome hero.

Notice I didn’t say the hero is ugly. He’s just… not perfect. Gaspar, the hero of Captive Heart, has a big nose. It’s not grotesque, but it is certainly big and there’s no getting around it. He’s still an attractive man. He’s active and fit. He has beautiful eyes and good teeth and wonderfully kissable lips. And he’s not one of those standoffish, snarly, have-to-break through his armor heroes. Heroes only get away with that when they’re super handsome, or have a scar but would be handsome without it.

Gaspar’s nose, in fact, appears in the story before he does. The heroine, Julissa, and her sister talk about it because they’ve recently seen Gaspar’s courtship portrait. Like true spoiled princesses, the girls dismiss him based on his appearance.

When Julissa meets Gaspar, she realizes his nose isn’t that big. And as a captive in his tent, she’s in a position to assess his other, more attractive qualities. A woman is truly ready for romance when she sees past a man’s good looks—or lack of them—and can focus on his character… or his really nice backside. It isn’t long before Julissa begins to appreciate what a sexy and intelligent man the emperor who captured her country really is.

The other interesting thing about having a hero who isn’t handsome is he can be adorably vulnerable. Gaspar knows he’s not handsome… but he wishes he were. As shown in the blurb above, he resents how often people judge him by his looks. Julissa rises even higher in his estimation by telling—and showing—him that she thinks his nose is just fine the way it is. That he’s fine. We all want the one we love and desire to tell us they think we’re sexy.
~~~~~~~~~~
I hope you enjoy my books. If you do, you can find longer excerpts and updates on my blog. You can also follow me on Twitter or Facebook. I’m on Goodreads as well, so you can say hi there.
I’m doing a giveaway of Captive Heart to celebrate this release so leave a comment at the bottom to win!