Good morning everyone! Let's give a loud round of applause to today's visiting T n'T's Confidential author: Julie Lynn Hayes!

Not only is Julie visiting, but what's more, she's giving away a copy of her book Forbidden 8. To participate in the giveaway simply leave a comment with your email (so we can send you your ebook!) and the answer to the question: What is the author's favorite fruit?

The random winner will be announced here on Saturday and Julie will get in touch with him/her. Have fun! 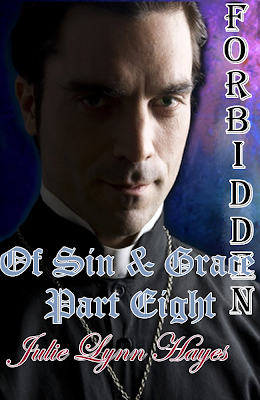 As Jerico settles into the new routine of life at Sanctum, Sergio finds the status quo has become unbalanced.

Ironically, as Sergio has to fight for equilibrium, is his influence on Jerico producing unexpected results? Jerico's nearness is testing Sergio's dedication to his faith.

Where does sin end and grace begin?


Welcome Julie!  Tell us a little about your upcoming release, Of Sin and Grace: Forbidden 8

Forbidden is a monthly series at Romance First Publishing, although after this installment it will go on hiatus for a while, until I finish the book and release it in its entirety. It’s something a little bit different for me—it takes place in the future, and although technically it isn’t science fiction, it is futuristic in that regard, and I did build a world for it.

The year is 2056 AD. The place—the Alliance of States, once the United States of America. The country is struggling to come back, under the leadership of President Alistair Boothe, from the Armageddon which took place in the year 2032. Life is hard, but not impossible. The church and the state have been closely woven together, for the good of the people. Infant mortality has risen, the birth rate has declined. Recognizing the futility of imposing celibacy, the church now allows its priests to marry women. Homosexuality is still forbidden, and pedophilia is punishable by death.
Jerico James is handsome, spoiled and willful—a rich young man with too much time on his hands. When he steps out of line once too often, he finds himself sent to one of the nation’s help centers to serve his community service, under the guidance of its director, Father Sergio de Basco. The moment he sees Sergio, Jerico is struck by the priest’s beauty—and determined to have him, no matter what the cost.

Southern Comfort is my gay YA series, although I am working on another one, which has a female protagonist, and it’s called History’s Child.  Why teens? I think it came about almost accidentally. I had written an historical gay novel, My Fair Vampire, with another author, and we wanted to write another book, but something different. We started brainstorming one day and the Southern Comfort series was born.

Writing YA is different in that you’re dealing with young people who are still under their parents’ jurisdiction, and have to watch what they do and say. But there are a lot of similarities too, and perhaps SC, as a series is different, because where some authors are afraid to show explicit sex between teens, we are not, recognizing that teenagers are sexual beings too. Their emotions are closer to the surface, often, as well, and more volatile, but each one is different too, in his own way.


Where do you find your inspiration?

Everywhere. It’s not not to find inspiration. A scene, a picture, a word, an idea… I’ve gotten inspiration without even trying. When my daughter and I went to see Inception at the theatre, a voice in my head told me that Leonardo di Caprio must be a vampire because he never seems to age—and a novella was born. Max Montague, narrator and main protagonist of the To the Max series was also a voice in my head that insisted on speaking, so I decided to listen to what he had to say, and a book was born! Likewise with Judas Iscariot. I’ve wanted to tell his story for over forty years but wasn’t sure how. One day, he too began to speak to me, and that was how Revelations was born. I suspect that I have more ideas, with more on the way, than I’ll ever be able to write in one lifetime. I hope I get to carry my notes with me when I got lol

I have a few WIP’s, actually. We’re writing the 5th book of the SC series. I’m working on a paranormal werewolf story, When Will I See You Again, about destiny, and overcoming tragedy, set in a mythical coastal city, Crescent Bay. I’m also writing my first PI novel, Personal Business. The first five chapters have appeared in Silver Publishing’s Silver Shorts anthologies. Also in the works are sequels to For Love of Max, Leonardo DiCaprio and Pavane for a Proud Prince.

What is a typical working day like for you? When and where do you write?

My working day has just changed, as I’ve gotten a temporary job. I leave for work at 7 am and I get off at 4 and come home and both edit and write, depending on what needs to be done first. Plus I write on the weekends too. I get up at 6:30 and keep going until I get tired. I write at my desk, which is in my living room, and I can also see what’s going on in the neighborhood. I take time out for dinner with my daughter and we watch something, then back to work!

What is the most blatant lie you’ve ever told?

That’s hard, because I really don’t lie. But I did once assume a male persona for a while on the Internet, so I guess that would be it, passing myself off as a gay male. But I didn’t write any books under his name or anything, just roleplayed in a few rp games. And in the end, I confessed that it was really me. 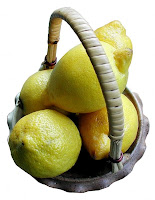 Any words for your readers?
I love to hear from my readers, love to know what’s going on with you, and what you think of my writing, so please, come visit my blog, say hello, and feel free to email me! Without you, I am nothing. Thanks for all your support, and I hope to bring you more of the same in the years to come!

Thanks for having me, Elyzabeth!

Thank you for visiting, Julie! And remember, if you want to participate in the giveaway leave a comment answering the question:What is the author's favorite fruit? and your email!!

To get in touch with Julie:


Want to read an excerpt of Forbidden 8?

Valencia had a point, whether he’d admit it or not—he couldn’t very well spend the next five years on that couch. His back would never take it. At some point, he had to face his demons. That was a good part of why he’d called his mentor last night. Besides the respect and friendship he held for the older man, he simply needed to hear his voice, to reconnect with that spiritual part of himself that seemed rapidly becoming lost in the shuffle, caught up in the upheaval triggered by the arrival of one Jerico James.

Dear God, he could not go down that path again. He just couldn’t. It wouldn’t be fair… to anyone. He’d worked so hard to walk the straight and narrow, suppressing his true nature in the best interests of Sanctum, as well as for the benefit of the Church. Right, wrong, or indifferent, it was what he had to do. His life plan had no allowances for someone such as Jerico.

By mid-morning, he was joined in the field by other workers from among the families, and his inner monologue was mercifully interrupted by their presence, forced to be put on hold by the cheerful camaraderie that bounced back and forth between them. He continued to work tirelessly, side-by-side with his parishioners, until about noon, when they all headed inside for lunch.  Sergio, however, made his excuses and retreated to his room.

After ascertaining that Jerico was nowhere about, he stripped and headed into the shared bathroom that separated the two bedrooms, stepping into the shower. The hot water was a blessing as it cascaded down his back. He luxuriated in the penetrating warmth that seeped into his aching muscles, eyes closed, head tilted back.

Unbidden, images of Jerico filled his mind’s eye. The way he looked at him, the cocky insolence that overlay a more vulnerable Jerico—the one he hid from the world. Jerico made no bones about wanting him, whatever his motives. Sergio couldn’t lie to himself, no matter how much he lied to Valencia. He wanted Jerico just as badly, and for all the wrong reasons.

He could just imagine him now, walking through the bathroom door without bothering to pretend it was an accident or that he didn’t know Sergio was there; brazen and brassy, and full of fire, the kind that could scorch a man’s soul.

“I see someone’s started without me,” imaginary Jerico comments as he proceeds to strip without hesitation or compunction, tossing his clothes carelessly onto the floor. He watches with intense concentration as every glorious inch of Jerico’s bare skin is revealed. Around his neck, he wears a silver cross which he never removes. Other than that, he is completely naked, and utterly beautiful.