Hey everyone and welcome! This week we've got a double date with lovely author Tali Spencer. *applause* Tali has just released two novels:   Sorcerer's Knot and Captive Heart (which is already an All Romance Ebook best seller) and she's going to tell us all about both of them today and on Thursday.

Tuesday is all about her male-male novel Sorcerer's Knot. Read on and leave a comment at the bottom because Tali is giving away a copy to one lucky commentator!!!

The Language of Dragons

Thanks for letting me stop by, Elyzabeth, to talk about my new M/M fantasy novella, Sorcerer’s Knot. I’ll also be giving away a copy of the book to one of the people who leave a comment below. 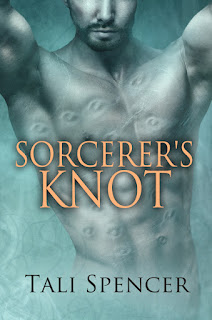 I’ve been asked what the title, Sorcerer’s Knot, means, and the best answer is that it becomes clear upon reading the book. But there’s no reason I can’t mention that it refers to a spell bestowed by a dragon.
Though no dragon actually appears in Sorcerer’s Knot, dragons nonetheless exist in that world. The genesis myth for the world where Sorcerer’s Knot takes place talks about a sundering of the Deep, when the dragons rebelled against the Old Ones and created land. The land rose above the waves and the dragon’s ruled it. They created every variety of land and sky life and consider humankind to be one of their more elegant creations. Being very ancient and generally disinterested in our society, they avoid humans unless one of them is summoned by a wizard powerful enough to speak their tongue. Dragon language is close to that of the elements from which dragons were originally spawned.

Once summoned, a dragon can be persuaded to bestow upon the summoner a single word, created at that moment. The word is tucked under the wizard’s skin, available to be used at any time. The spell it enables is the most powerful of all. Here’s a short blurb that describes it well:

Muir held his gaze. As moonlight flickered through the shutters, he asked, “Why seek magic you can never turn to your advantage? You will never leave here. I placed a sorcerer’s knot upon this island, a spell that can never be broken. Anything that comes to this island, whether it be living or dead, animal, plant, or mineral, can never leave.”

Cian’s breath caught. If what Muir said was true, he was trapped here forever. A sorcerer’s knot, though difficult to work, could not be unmade unless the world was unmade. It held at its heart a single word granted by dragons to a mage who had successfully summoned one of their kind. A single word that, once used, ceased to exist and could not be recreated, removing all hope of breaking the spell.

That’s not the only gift given by a dragon in the story. Cian didn’t just summon his dragon, he seduced the great beast and enjoyed a little extra… attention. In return, the dragon rewarded him—or rather, his ass. Dragons, as Muir says at one point, are unusually intuitive.

So there you have it! A sorcerer’s knot is a spell to be reckoned with.