Happy Hump day! I'm afraid I don't have a Wednesday Brief for you today but, I do have a special offer! Due to my upcoming release on August 14th of The Mercenary Slave, the price of my previous Evernight novel THE MERCENARY KNIGHT has been reduced for a limited time to ONLY 99cents!

Immerse yourself in a medieval world and meet the men and women that will warm more than your heart. 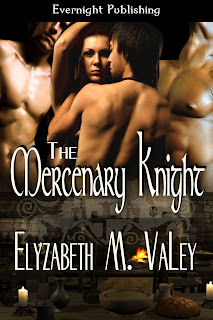 “Men have their needs, as do women.” That’s Tanya’s premise as she flees her hometown and encounters four helpful mercenaries: Conrad, Wybert, Gregorii and Johann. However, her unexpected attraction to the aloof Conrad will tickle not only her desire but also her heart.

Once a knight of the kingdom, Conrad now roams the road as a ruthless mercenary in the company of his three men. Years have passed since he quit the Code but old habits die hard. He can’t stop himself from being a chivalrous gentleman to the tavern wench he’s saved, even if his desire for her surpasses anything he’s ever felt before. But, for how long will he be able to fight the temptation?

Click here to buy your copy for only 99cents: 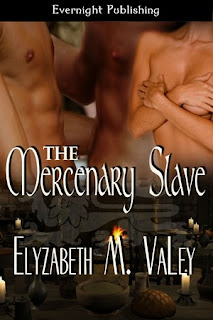 Ambushed, captured and sold. After losing his best friend, Wybert is forced to give up his life as a mercenary and become a pleasure slave. The daunting task becomes harder than expected when the attraction to his slave master goes beyond the bedchamber.

Izz-Sarava was content with his life as the Zshanti's slave master until the new serf appeared. Somehow, under his presence, his control slips and his heart becomes exposed.

As their feelings develop, will they be able to overcome a past that haunts them to pursue a future together?

Want to read some Wednesday Brief?
Here are the links for today's briefers:

ps: the winner of Scarlett Knight's giveaway will be announced tomorrow, so you still have time to participate! Click here if you'd like to win a copy of "The Emerald Room"
Posted by Elyzabeth M. VaLey at 6:05 PM