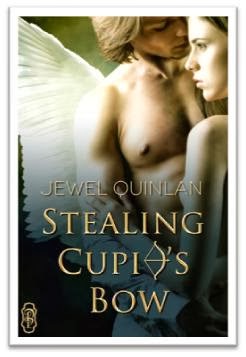 Recently heartbroken,Raine Daniels arrives home in Las Vegas, Nevada, to help with her parents’ fortieth anniversary party only to discover they are planning to separate as soon as the last guest walks out the door. Everything she thought she knew—her very foundation is rocked to the core.

When she learns that Alexander, the sexy stranger she’d sat next to on the plane, is really the god of love, Cupid—she asks for his help, but he declines. The god of love, now long divorced from Psyche and living on earth among mortals, no longer believes in love.

Raine decides to take matters into her own hands, even if a god tells her she’s wrong.  With her life falling apart around her and the solution seemingly within her reach she dares to try and make everything better. Unfortunately, she’s unprepared for the consequences of stealing Cupid’s bow …
Where you can buy it:
Amazon | Barnes & Noble |All Romance eBooks|Decadent

About Jewel:
From a young age, Jewel Quinlan had an abundant imagination and strong desire to write novels.  She particularly enjoys writing paranormal and fantasy romance. An avid traveler, she has visited fifteen countries so far (which she enjoys using as settings in her novels) and has plans to see more of the world. She has a particular fondness for Bavaria and studies the German language as one of her hobbies. During the day, she works as a pharmaceutical sales representative and, at night, she writes romance. She currently lives in Orange County, California with her two dogs; Shimmer and Penny.

From the corner of her eye, the back of a blond head, paired with broad, strong shoulders, caught her attention.
She knew who it was instantly.
Alexander was walking up ahead of them in the same direction. Her entire being zeroed in on him at once and she felt her pulse spike.
Jane was saying something to her, but all of her attention was tied up with trying to see his face. He’d moved off to the side now, and it looked as though he was watching someone intently. Actually, a couple of someones—a man and a woman. On the surface it looked like he was strolling along casually, but she could not mistake the intensity of his gaze on them. It seemed almost…predatory. Was he following them?
Both her mom and her aunt walked so slowly it was almost an agony for her. She didn’t want to lose sight of him. But there was nothing she could do. If she tried to make them hurry, it would spark questions from all three. And the most likely result of her telling them why would be her mother flagging Alexander down in a loud voice, which would be embarrassing.
Jane continued to chatter away, but Raine still couldn’t focus on her cousin.
Up ahead she saw that the man and woman had stopped next to a fountain. The man was saying something. From the look they shared, it seemed to be one of those special moments. Alexander stopped, too. He was leaning casually against a pillar watching the couple.
The man Alexander watched sank down on one knee while retrieving something from his pants pocket.
Alexander changed his stance at the same time. Out of nowhere a bow appeared in his hands. He quickly notched an arrow from the right side of the quiver on his back. He drew and took aim, gazing along the shaft of the arrow.
From what she could see there was only one target apparent in that direction: the woman.
As he released the arrow, a scream rose from within her, but the sound caught in her throat. The gleaming shaft streaked across the space and sunk deep into the woman’s chest, emitting a shower of golden sparks on impact. A second arrow struck the man as well and another cloud of gold erupted. She stopped walking and, since their arms were linked together, Jane did, too.
“Did you see that?” Raine asked.
Jane glanced at her. “See what?”
She pointed in the direction and her cousin peered up ahead.
“What is it, Raine?”
Her cousin wasn’t reacting at all and neither had either of their mothers. And none of the people that had passed right by the scene of the crime were disturbed. She looked again at the couple, afraid of what she might see…and blinked.
There was no blood. No body lay on the floor. No arrow shaft stuck out from either of them. Quite the opposite. The woman was unharmed and glowing with happiness. She had accepted the ring and the man was now swinging her around in joy.
“Did you mean the couple getting engaged?” Jane asked. “Oh yes, it happens all the time here.”
Raine was stunned. Her eyes found their way back to Alexander.