My vacation is over and I started work again on Monday. It's been an exhausting week. Writing wise, I wanted to write tons but my muse seems to have run off somewhere far from this ridiculous heat, so I haven't advanced in that vampire story I'd been working on.

Nonetheless, I have a release coming up this Friday the 14th, so I'm sharing a snippet from it! It's the third and final book in the Lust, Love and Darkness series.

EBM music blasted through carefully disguised, state of-the-art speakers, drowning out all but the cheers of the crowd gyrating wildly to the DJ’s set. Scantily dressed women danced on pedestals while men swayed from side to side, heads raised and eyes glued to the perfect bodies on display. Green and red lights swept over the guests at Staerling’s mansion, exposing slack jaws and half-lidded eyes. With lust, drugs, or simple exhaustion, Thomas didn’t know. A new beat filled the hot and heavy air. As one the throng cheered, moving like a wave about to crash against the shore, Thomas took a step back and returned to the hallway. He ran his fingers through his hair, his face damp with perspiration just from stepping into the dance room for a few seconds. He pulled out his phone and checked Staerling’s message.

We’re in the Greenhouse. 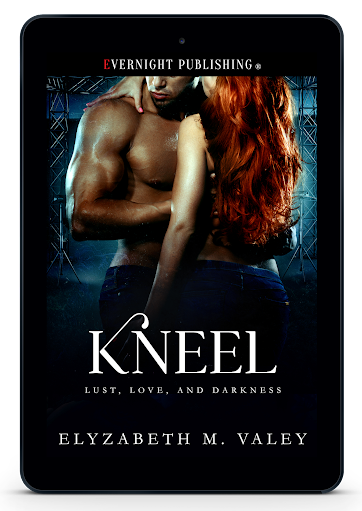 He’s her number one fan.
Thomas Helton has been obsessed with model Kendra Williams for over a decade. Beautiful and sensual, Kendra shows a seemingly tough exterior, but Thomas craves to break through the facade to see what truly lies beneath, and he’ll do anything to achieve it.
She’s the woman everyone wants to see on her knees.
Kendra Williams kneels to no one. She teases, she flirts, and she assumes all other poses, but she never submits or drops her picture-perfect mask.
Until she meets Thomas Helton.
The fetish photographer, well known for displaying not only the eroticism of BDSM but also the emotional bond behind it, appeals to her in the same way the man who made her averse to kneeling did. Common sense warns her to stay away, but Kendra finds herself getting inexorably closer.
Will she regret her decision, or will Thomas be the man to finally make her kneel?