So to start thee year off, my computer has decided to start acting up and it's either repeating random letters or having the letter ""e" not work - not to mention, the charger isn't working properly. Ugh. If I randomly disappear, you will know my computer died.

In any case, today I'm sharing another snippet from Weekend Magic, as I still have one more day of holiday left!

“I guess I should, though the train isn’t magical and really you won’t see any magic until we get closer to the farm. In any case.” He spread his arms. “Welcome to the Christmas Realm, where the myth of Santa becomes a reality.”
Mia’s laughter stopped when she noticed Karnon wasn’t reciprocating.
“You’re serious.”
“I am. This is a magical place and if you’re here it must be because you believe in magic, too.”
“No.” She huffed. “I’m an adult, I stopped believing in Santa, the Easter Bunny, and all that, ages ago.” 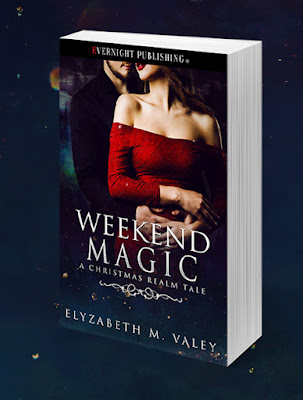 No-strings-attached sensual fun in an exotic new world? Yes, please!
When Mia Ert gets an invitation to the Annual Christmas Tree Convention which takes place in August, the last thing she expects is for it to be at the North Pole in a place called the Christmas Realm, where every fairy tale creature she thought was mere fantasy is actually real. Convinced it’s a dream, she decides to make the most of it, especially when she meets her guide, Karnon.Surely, a weekend of passionate lovemaking with a fiery human wouldn’t hurt anyone.Elk shifter Karnon was only supposed to act as Mia’s guide into the magic of his world for a few hours, but when the sexy human starts to flirt with him, who is he to resist? After all, they told him to make her feel welcome, so he’s going to make sure she gets everything she wants, including a few mind blowing orgasms.With both of them on the same page, nothing can go wrong. Except, will forty-eight hours be enough to satisfy them both?Available Now:Evernight Publishing  ~ Amazon.com ~ Bookstrand~ Amazon.uk~ Smashwords  ~ Nook ~ Koboand more
Posted by Elyzabeth M. VaLey at 5:34 PM