I'm back! If you follow me on social media (Facebook or Instagram) you probably know I was away on vacation, kicking back and having the time of my life. I got back at the end of the month, but getting back into the gist of things has taken me longer than I expected. Nonetheless, I'm back and with great news!

Killian's Hope, the latest Alpha Protectors released on Tuesday and Spread, book 2 of Lust, Love and Darkness has been accepted by my publisher and will be published sometime in September.

XoXo,
Ely
*Some creative punctuation has taken place to adjust to guidelines

~ ~ ~ ~ ~
“You ask me why.” He gripped her forearms. Her lips parted and her eyes widened, pupils dilating. Killian smashed his mouth against hers in a desperate attempt to make her understand. He groaned. The softness of her mouth made his heart ache with yearning. She twisted her head and he released her. Sucking in his cheeks, he let out a long breath. “Because life is not only about war, Prudence, there’s love too. Or at least, there should be, even if you don’t feel it.” 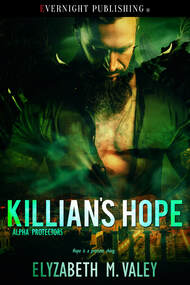 Hope is a precious thing.

Hope is all Alpha Protector Killian has. Hope for more time with his mate. Hope for a better future in which they can be together freely. When they’re both assigned to the same undercover mission in Spain, Killian seizes the opportunity as a chance to spend more time with Prudence.

Unfortunately, she doesn’t share his point of view, but hope is the last thing he’ll lose.

It’s not greed if it’s for the greater good.

Prudence loves Killian above all else, but her mission in life is to serve the Virtues and keep the balance between good and evil. Being appointed leader of the Spell Casters in the dangerous mission to defeat the Sin Lords is her chance to prove to her superiors that she can be the next High Priestess.

The only problem is resisting Killian.

With years of pent up love and frustration tugging at them, will they be able to avoid succumbing to their forbidden mating? And what will happen when the evil which they were sent to destroy threatens to tear them apart forever?
Posted by Elyzabeth M. VaLey at 12:00 AM