Today, I'm sharing another snippet from my story, Alpha's Sunshine, from the just released Evernight Publishing anthology, Owned by the Alpha.

Today, I went for another sexy tease between our characters. Enjoy!

“When we’re together I’ll only ever have eyes for you, May.”
May shivered. The depth of his feelings showed through the blazing intensity in his gaze. This was more than lust. This connection ran deeper than blood. Sisu didn’t need to speak for her to see it. It
radiated from him.
“When we’re apart, I’ll only be thinking about you. Your taste,” he continued, brushing his lips over hers. She gasped when he nipped her bottom bow, tugging. Pent-up arousal shot through her
system.
“Your fragrance.” Sisu buried his face in her hair. A low moan of approval came from him, ricocheting straight to her core. He twisted and pushed her back against the mattress. Looming
over her, he slid his palm down the side of her breast, over the curve of her waist and hips, and rested there. Her legs parted of their own volition and his lips curved into a sinful smile.
“When I’m not at your side, I’ll be remembering the passion in your eyes and the heat between your legs.”
He cupped her sex, one of his digits worming its way beneath the elastic of her underwear.
“The way your body responds to me and only to me,” he rumbled, entering her with two fingers.
“Sisu,” May whispered.
He took possession of her mouth, pressing his tongue and demanding for more like a persistent sledgehammer. May curled her hands over his biceps. Her mind swam with emotions and thoughts,
but her body responded to Sisu like a fine-tuned instrument waiting to be played. They broke apart, gasping for air.
“Do you have any idea how hard you make me? How desperate?” he whispered in her ear. “You bring out the wolf in me,May. I’ve yearned to make you mine from the moment I saw you. All I need is your consent.”

He has never been this challenged.

Sisu doesn’t play games. When he desires something, he goes after it. This time he wants the woman named May. The moment she entered the bar and his wolf got a whiff of her scent, he knew she belonged to him. The problem is she’s scared and holding back secrets. But Sisu never gives up, and this won’t be the exception.

She doesn’t trust anyone, especially shifters.

May is forced to ask shifters for help, but everything goes wrong when Alpha wolf, Sisu, interferes. He claims to be her mate, but she knows that’s impossible. Soulmates don’t exist. Besides, every time he comes near, a strong keening ache grows within her. Surely it is a warning sign for her to step away, not closer. Right? 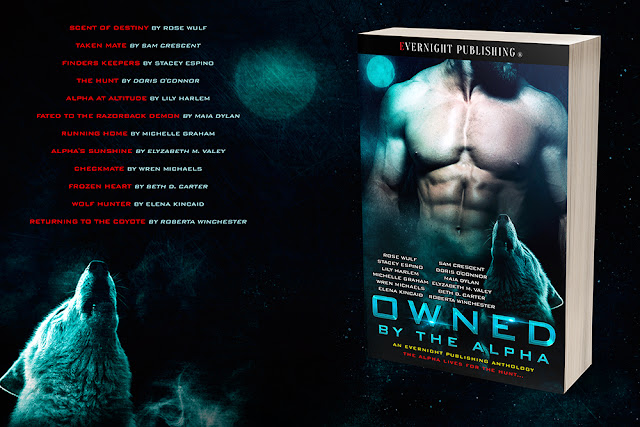 Evernight Publishing
Amazon.com
Amazon.uk
And more!
Posted by Elyzabeth M. VaLey at 12:00 AM