We're a little bit closer to Friday. *g* Today I'm sharing a snippet from the third book in The Witches' Mischief series, titled, The Three Thieves and the Dom. This is a poly-amorous relationship.

Can you guess what Naughty Fairy Tale this story is based on? 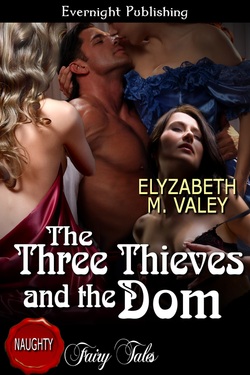 But, what is the truth? And will Conall’s special kind of coaxing make them speak?

In this snippet, after many tribulations, Conall and the women are reunited and it's time for some play. Grace gets to go first. Lucky girl *g*

Coming to his feet, he went toward the things he’d dropped into the room when he first came in. Among them, he picked out his riding crop. The instrument whistled through the air as he slapped it
into his own hands. His breath stilted and his cock grew fat as the women squirmed. The beauty of the instrument was that it could inflict both damage and pleasure. His anger had faded long ago,
replaced by the yearning and the love he felt for them. Their love was a gift, their submission in the bedroom was more than that. It humbled him. Slowly, with his boots clapping loudly against the hardwood, he went to them.

“Do any of you need to be gagged?”

He looked purposely at Grace, waiting.

“No, Master,” they replied.

“Are you certain, Grace?”

Conall raised his eyebrows, watching her carefully. Her cheek was pressed against the mattress, her blonde locks tumbling around her.

“If you but squeak, the punishment will be worse.” He ran the leather strip of the crop down her spine. She shivered. “I will not allow you to orgasm, angel.”

“I am aware, Master Conall.” Though goose bumps coated her flesh, her voice was steady.

He pulled back and took in a deep breath. His nostrils flared. Already, he could smell their arousal. He briefly contemplated pleasuring them and setting aside the punishment he had in store, but
disregarded the idea. He twirled the riding crop in his hands, holding it so that the leather strip was against his palm. He would use the instrument as a cane, marking their flesh with long, red, angry stripes.

Without warning, he flicked his wrist and hit Grace’s bottom. She cried out in surprise. Without giving her time to recover, he hit her again, three times in each ass cheek in exactly the same place. The blonde buried her head on the mattress, wriggling slightly as she fought to remain in place and not shout out. Four more strokes. Conall’s cock throbbed. Her bottom was red and marked. She would be sore on the ride back home, but she’d remember never to leave him without a goodbye, never to leave him brokenhearted again. He took a step back. Grace’s eyes were tightly shut, her mouth open as she took in shallow breaths. Conall ran his fingers through her hair, brushing it
away from her flushed features. She moaned. Smiling, he moved away.

The Three Thieves and the Dom is available at:


Stop by to read the tease and follow the links to other great teases.
Posted by Elyzabeth M. VaLey at 12:00 AM