Happy Hump Day, lovelies! Welcome to another installment of Myths, Secrets and Love :-) This week I used the prompt The man had all the manners of a surly bear and aided myself with the picture prompt below. Enjoy!

If you don't remember what happened in the last four chapters, you can read them HERE.  (Scroll to the bottom).

Rodric followed Arjä in thoughtful silent. A Centaur had joined them soon after entering the skirts of the forest and was guiding them deeper and deeper into the wilderness. His head ached. He should have gotten rid of Fergus when he had the chance. The man was nothing but trouble and if he had had any common sense he would have paid off his debt in gold and never established a friendship between them. Rodric rubbed his tired eyes. How different his life would be if he had never met Ferguson. To begin with, he wouldn’t be traipsing through a Unicorn forest. Secondly, he would not have taken to the seas again. He had repeatedly told the dastard man that he had no interest in pirating. It was too dangerous, what with the English taking over everything and declaring piracy illegal. Yet, Fergus came pleading and he’d conceded.

“One last time,” he murmured under his breath, imitating Fergus. “One last time.”
Rodric snorted. One last time and here he was, traversing the world to find the bastard. Suddenly, he stopped.

The centaur turned his head to look at him, a proud glint in his eyes.

“They are Miraplata, a unique tree to the Arvynen race.”

Rodric tripped. Unfazed, he kept walking forward, wide-eyed. The earlier clearing he’d seen was amazing, but now he stood in a circle of black grass, surrounded by silver trees. The place was empty except for a dais at the back were two thrones were set and upon them a woman and a centaur. Rodric froze, unsure if he should approach them. From where he stood he could see that the woman was out of the ordinary. Not only was she beautiful, there was power in her. 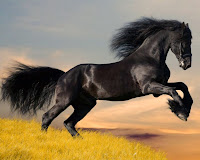 Rodric jumped at the rough command. It came from the centaur sitting to her left. He was impressive. His hair was an inky black, the edges curling below his naked torso. Rodric swallowed. A body that was hard and littered with scars, indicating that he was a seasoned warrior. There was no doubt that in combat, Rodric would lose.

Arjä took hold of his hand and led him to the dais. She bowed and he followed, a nervous jitter pinpricking his flesh.

The woman’s full lips curled into a smile, her violet eyes observing him with kindness. She was by far the most beautiful woman he had ever seen, and that was saying something, for Rodric had seen plenty of women in his lifetime. Even the siren’s with their alluring beauty paled in comparison to the woman at the throne.

“Welcome Rodric Belavue, we have been expecting you.”

Rodric nodded, unsure if he should speak. He could barely imagine Fergus having been in his place. The man had all the manners of a surly bear.

“I am Lenara, queen of the Arvynen and to my left sits Diyör, king of the Arvynen.” She smiled warmly at him. “We have much to speak off, but first, I must make you swear secrecy and fealty to me and this kingdom.”

Rodric balked. From what he’d gleamed royalty was always subtle and indirect. This queen was different and he didn’t know what to make of it.

“We do not play your human games here,” the queen said. “And there is no time to loose, for Fergus is in more danger than he himself is aware of.”

Rodric perked up. His heart hammered against his chest and worry ate at his gut.

“Kneel and swear and I shall tell you.”

He frowned, and glanced about. There was no running away. Not that he had any intention of fleeing but it was always a good idea to have an escape route. With a hefty sigh, he kneeled before the Queen. She stood from her throne and placed her long fingers on his shoulders.

“Do you Rodric Agnus Belavue swear to secrecy and fealty to this kingdom until the day you die?”

The Queen laughed. “It will do, I know you will never betray us.” Rodric’s eyes widened as the queen began to shimmer and fade. His mouth fell open as in her place a marvelous unicorn appeared. Her horn touched his left shoulder and then his right.

“Touch my horn” Her voice echoed in his mind and he did as asked, too shocked to do anything else.

“I swear secrecy and fealty to this kingdom until the day I die.”

A cool burst of energy seemed to pass from the horn to his fingers. Rodric shivered. He released the horn as the unicorn began to shimmer and shift again. Only then, did he realize that he had fully sworn fealty and secrecy to the kingdom.

“You tricked me,” he said rising to his feet in anger.

The queen glided back to her throne. “No, you swore what came from your heart.” She shrugged and waved her hand. Rodric balled his hands into fists, attempting to control the rolling rage coursing through him.

.“Draw a bath for the gentleman as well as clean clothes. He’ll need ointment to kill the vermin in his head. Prepare a meal as well,” Lenara ordered a servant that had appeared.

“A bath? Food? I just swore fealty and secrecy not for any of those things, but for Fergus. We need to talk, my lady. I don’t have time for this, especially if as you say, Fergus is in danger.”

The Queen smiled beguilingly at him again. “It will only be for this day, Captain. The light will soon fade and you will not be able to travel. You shall bathe and eat and we shall speak. Tomorrow you shall part and the winds will be in your favor, I promise. You will reach Fergus before you know it.”