Day 10 is here! Let's Give Melissa Hosack a warm welcome in today's #TNTConfidential 12 Days of Christmas!

What is your favorite thing about the Holidays? –

My favorite thing about the holidays right now, hands down, is my son. He just turned four in November, and everything about the holiday is exciting for him. He’s made me feel like a kid again myself! Every Christmas carol is fun for him. Every holiday special is new and thrilling. Wrapping gifts is an exhilarating secret. Every little aspect of the holiday is magical for him. This has been an amazing Christmas season for my family. One I won’t forget any time soon.
What inspired you to write your book? –

I had the idea and wanted to go for something very unique. I wanted more than the girl meets boy and falls in love around Christmas time. In my story, Santa is real. He’s smoking hot and a bit domineering. It was fun to take the classic holiday figure and spin him into a sexy stud. I felt it was a nice holiday story for those of us adults that still love everything about the holidays and would enjoy a very magical, yet sexy story. I was inspired by the challenge to write such a thing.

Share a Holiday anecdote with the readers –
The Christmas story I would like to share with my readers is from my childhood. It isn’t one specific date but a tradition. When I was young, I remember spending part of every Christmas Eve at my grandparent’s house. When it got dark, my grandmother would tell us that Santa was on his way, but we couldn’t be at the house when he stopped by, or he wouldn’t be able to leave the presents. So every year, me, my siblings, and my two cousins would get all of our winter apparel on and take a car ride with my parents. We’d drive around and look at all the Christmas lights. We’d ‘ooh’ and ‘ahh’ for a while, all of us secretly amping up over the possibility of gifts upon our return. After about fifteen minutes, we’d head back to my grandparent’s house. Wouldn’t you know it, every year when we got back, Santa had arrived and the presents we received at grandma’s were under the tree waiting for us! Somehow, every year, we were all completely fooled by this ruse. We thought it was so magical and exciting that we’d missed Santa by only minutes! Yet we’d also feel so terribly relieved that we’d left the house just in time. It was a fun, silly tradition that has stuck with me through the years. I look forward to creating my own silly traditions with my son. 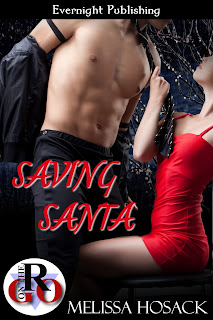 Cara Faulk has always loved Christmas and delights in anything related to the holiday season, but even she finds it odd when two elves show up at her door offering her a paid vacation. As they approach their destination—the North Pole—things get even stranger. Cara is informed that the elves would like her to seduce Santa, because Christmas is in need of a Mrs. Clause.


Extremely reluctant about this new adventure, Cara is thrown once again when she is berated and hollered at in the elf workshop by none other than Chris Kringle himself. She doesn’t know what is more shocking, the fact that Santa is drop dead gorgeous or that he’s arrogant, self-centered, and anti-social.

Despite their less than stellar introduction, Cara finds she can’t resist Chris.  His life is enchanting, and his dedication to his work humbling. She finds herself drawn to him despite his egotism and their frequent shouting matches. The two dance back and forth between a love/hate relationship. Neither wishes to marry or be a part of the elves’ plot, but they can’t seem to keep their hands off of one another. As the holiday’s end draws near, Cara is torn with giving up Chris and the magical life she’s been introduced to and admitting that she might just be falling in love with Santa. 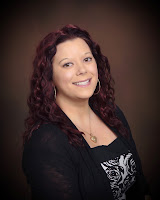 Melissa Hosack lives near Pittsburgh, Pennsylvania with her husband Jeremy and their son Marshall Frost. Her favorite genre to write is Paranormal Romance.

Melissa attended London School of Journalism where she received her certificate in Novel Writing in 2011. She writes a monthly short story column titled Frequent Flyer for a government newsletter.

Melissa's first full length novel, Deadly Encounters of the Supernatural Kind, was released by Whimsical Publications on March 20th, 2009. The sequel titled Supernatural Kid on the Block was just released on December 13th.

Tomorrow... Victoria Adams!
Posted by Elyzabeth M. VaLey at 12:00 AM