TnT Confidential: Doris O'Connor and The Housewife and the Film Star

I did it! *dances* I finally strapped Doris O'Connor to a chair and interviewed her. Read on and find out more about this prolific (and slippery) author and her latest release The Housewife and the Film Star. 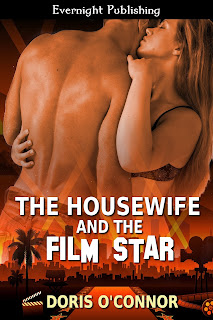 When International movie star Sven Larsson meets young widowed mum of three, Sylvia, the sexual chemistry between them is instant and explosive, and plastered all over the papers. Sven needs to repair his damaged reputation. The last thing he needs is another scandal, but the Dom in him can't resist the challenge Sylvia represents.
Having survived an abusive marriage, Sylvia is not looking for another relationship, let alone a kinky one with a man of Sven's reputation. Her submissive side can't help but be drawn to him, however, especially once she gets to know the man behind the public image. This private, broken, Sven she cannot help but fall in love with, even if he doesn't do love.
With the paparazzi breathing down their necks at every turn, and past demons raising their ugly heads, will they ever be able to find happiness?

Welcome Doris to In A Dream Beyond! You’ve visited several times before, but somehow you’ve managed to escape from my grasp and have not been submitted to an interview. Now, however, brace yourself. I’m sitting you down, tying you up and not letting you leave until you answer all my evil questions.  *grin*

Ooooh, you didn't say there was tying up involved! I would have done this sooner…
*winks*
Seriously though, thanks so much for having me here again. :-)

This question is a must: When did you start writing and why?

Well, that depends which way you look at it. I've been writing since I first learned how to. If you mean, seriously with a view to publication, then that would be September 2010. I decided to join a writing competition on a whim, wrote the first chapter in a day and send it off. Not surprisingly I didn't get anywhere in that competition, but I had to finish that story. Then came NaNoWriMo, and I was hooked. I've been writing ever since.
All these stories that I had bouncing around in my head, all decided they needed to be told.

You have several children, a husband, and I believe, some pets too (?), yet you manage to release a novel at least once a month. We demand to know your secret, er, I mean, how do you do it and where does all your inspiration stem from? *smile* Are you some kind of superwoman? Your secret is safe with us.

Well, you see, I don my purple tights and cape and…

In truth, I have no idea. All I do know is that once a character announces himself, and it's always the hero who comes knocking on my shoulder and whispers naughty things into my ear, I have to write. Resistance is utterly futile. I just give myself a massive headache and go even more vacant than usual, and I live up to my hair color enough as it is!

It's both a blessing and curse. A blessing because the words come very easily, even if it means that I forego sleep to get them down. A curse, because it can take over my life a little. Fortunately, both hubby and the kids are well used to me being away with the fairies, as it were. They've also learned it's best to let me get on with it, because I'm like a bear with a sore head when I want to write and can't for whatever reason.
I'm very blessed to have such a supportive and understanding family.

See above, lol. Typically something catches my muse's attention. It could be a newspaper clip, a song, a picture, an overheard conversation, a submission call, you get the idea. Unsuspecting little me will have a nice long soak in the bath, or go to sleep and BANG. There he is, making a nuisance of himself and demanding I tell his story—my latest hero.

I pound away at the keyboard furiously, loose sleep, snap at the kids, etc. until that first draft is done.  This is what I call the word vomit stage.

Then I go back and edit, before I send it to my super 'reditor' (thus called due to the red ink involved) Raven McAllan, who will pull me up on my repeat words, and my he, she, he, she starts of sentences, as well as my DDS's. This stands for Doris Deadly Sentences, lol. A term aptly invented  by Raven for my tendency to write looooooooooooong sentences, so she would run out of breath trying to read them.

I will get the ms back and giggle at her comments, and I might have the odd argument with her, which she invariably wins, lol.

I fix what needs fixing and then sub it. Then and only then will those demanding characters stop harassing me.
I may or not may get some down time before another hero announces himself. The funny thing I always miss them when they're gone and some never go away completely. That's usually when I end up with a series. I'm a complete and utter panster, so I never know what will happen. It's always an adventure.

Do you ever have to do any research for your books? Have you had to research something for this latest release? If yes, tell us a bit about it.

Yes, I do research all the time. I vividly recall looking up property in Malibu for this release and calculating times of flights, and distances. Timings of film festivals etc. It was fun. Needless to say Hubby is always happy to help with more hands on research too.

Please tell us, in 3 to 5 words, why are we going to love this new novel.

If you had to pick one line from this release, it’d be:

"You won't be free of the bastard completely until you've replaced those fears with screams of pleasure. Let me be the man to do that for you, pet."

And finally, what’s next for you?

I also have a bear Shifter story in another Anthology coming soon, and I have several open WIPs that I flit between.

At the moment I've ground to a halt on all of them, so am just enjoying some down time. Those characters will soon be driving me hard again, I'm sure. :-)

It’s Halloween and you are… not taking any notice, because we’ll be away on holiday, lol.

*If you celebrate Halloween* What are you planning to dress up as this year? or If you could dress up as something on Halloween, it’d be… ?

We don't dress up for Halloween, but if I did I'd be Vamp, or maybe a Zombie.

Favorite thing about autumn
All the lovely colours and the conkers.

Hmm, nothing immediate springs to mind. I don't scare easily to be honest. As my eldest son said, "If zombies came to attack, mum would simply tell them to wash and stop making such a spectacle of themselves. And then she'd blow their heads off."
*snigger*

http://www.dorisoconnor.com/the-housewife-and-the-film-star.html
Author Bio:
Glutton for punishment would be a good description for Doris... at least that's what she hears on an almost daily basis when people find out that she has a brood of nine children, ranging from adult to toddler and lives happily in a far too small house, cluttered with children, pets, dust bunnies, and one very understanding and supportive husband. Domestic goddess she is not.

There is always something better to do after all, like working on the latest manuscript and trying not to scare the locals even more than usual by talking out loud to the voices in her head. Her characters tend to be pretty insistent to get their stories told, and you will find Doris burning the midnight oil on a regular basis. Only time to get any peace and quiet and besides, sleep is for wimps.

Now, read the delicious Excerpt. I know you want to...