Happy Valentine's Day, readers! Today I have the perfect T n'T's Confidential Valentine's day guests:  Adonis Devereux. If you haven't heard about this lovely and crazy in love couple, then I urge you to read on and find out more about this talented pair that have just released The Lotus Ascension.
They're holding a giveaway! So leave a comment (with your email address) below telling them something surprising about your love life to win!

A quick reminder before I give them the full spotlight:  my Birthday Bash with plenty of prizes and gifts for you all start's on Saturday! Join me!

Now, I give to you the wonderful Adonis Devereux! 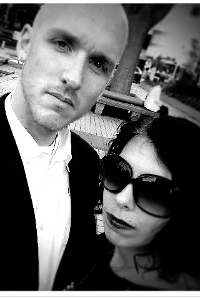 Adonis Devereux is two people made one. He grew up in Michigan and in rural Indiana, a Midwestern boy with a passion for story. She was rootless, a Virginia native who lived in London, Paris, and Rome before her parents settled just outside Tokyo. Like him, stories burned in her.

They met in university at a poetry reading, and their love story continued into marriage, graduate school, and half a dozen children. Now he teaches at a Japanese national university, and she teaches children to invert fractions and decline Latin nouns, all while researching ancient Roman and medieval recipes for their novels.


Together, they are Adonis Devereux, and they’re proud to have published their entire line of Gilalion books with Evernight. They’re sad to say goodbye to the fantasy world that has cradled seven amazing couples, but they’re excited about moving on to a new line of books. 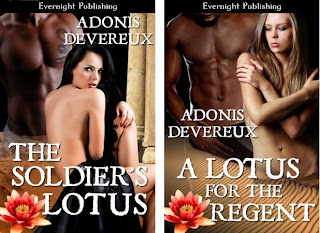 Konas Seranimesti was present eighteen years ago when the last Lotus in Arinport gave birth to twins, Soren and Sillara. Sillara was betrothed to Konas's brother the day of her birth, and Konas has fallen in love with his brother's promised wife.

But what can Konas do? Sillara is the daughter of a Lotus, and her life has been planned out in advance. She has never been allowed to choose anything for herself. But when her twin brother, Soren, who is himself feeling the pressures of his station, joins her on a desert hunting trip arranged by his best friend, everyone's plans for Sillara are ruined.
Lost in the desert and assumed dead, Sillara is given choices for the first time in her life, but how can she choose a love she has never recognized? Will Sillara's choice ruin Soren's chance for love? And can Konas win a heart promised to another man?