Hey everyone! Welcome to T'n'T Confidential! Today author M.A. Church is in the spotlight interviewing her Cupid and Jeff from her recent release Perfect. Check it out! There's even a book trailer (right above) and an excerpt at the bottom! Have fun! 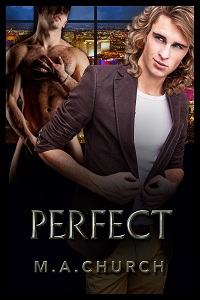 Jaded billionaire Jeff Mayfield loves only what his money and power can buy, but the Fates have plans for him. First a player in Jeff’s casino hits a huge jackpot and things turn hectic. Then, in the middle of the chaos, Jeff lays eyes on the unbelievably sexy Cam Smith—Cupid in his human form.

Seized by lust, Jeff makes a move, only to find himself on the receiving end of a blistering wave of sexual intent. Cam disassembles Jeff’s self-image and puts it back together upside down. But Jeff isn’t the only one struggling with control. Cam’s alter ego is Jealousy, and if he loses his composure, the consequences will be deadly.

Available at:
Dreamspinner Press
Amazon
ARE

Hey everyone! My name is M.A. Church. Instead of me going on, lol, I thought I’d have Cupid and Jeff tell us some about their story, Perfect. And oh look, there they are now! *waves* Hey guys, over here. Thanks for letting us do this at your casino, Jeff.

Jeff: Not a problem. Glad you could make it.

Cupid: *shakes head* M, you know I go by Cam when in this form.

M: Oh Lord, don’t you start with me, you little imp—

M: Don’t give me that innocent look, Cam, it won’t work, especially in this form. You tend to forget I know what you look like in your god form too, even though Jeff hasn’t seen that form… yet.

Jeff: *rolls eyes* What’s the big deal about his other form?

M and Cam together: You’ll see!

Jeff: Huh. Well, it can’t be any worse than his other form.

M: There is that. Anyway, back to the point I was making: You about drove me nuts while I was writing Priceless. That was supposed to be a standalone story, and you just went on and on about how you wanted a mate.

Jeff: *grabs Cam’s hand* You did give her lots of trouble, babe. And you certainly turned my world upside down. There I was minding my own business, then you showed up and knocked me on my ass. You took a top and helped him become a bottom.

Cam: Speaking of your ass… *leers* I loved every minute of it too. I knew you were the one for me the moment I heard the challenge you issued. *sigh* I just wish you hadn’t had to meet… my other side.

Jeff: We’ve been through this. I love you and I love him, even if Jealousy does scares the living daylights out of the other gods.

Cam: Well, you certainly tamed the beast, that’s for sure.

M: Want to tell us a bit about Jealousy?

Cam: Simply put, he’s the other side of love—the dark, dangerous, obsessive side. Wars have been started when Jealousy makes an appearance. He shows up in the story because something happened with Jeff.

Jeff: And you know now what you saw was all a set up.

Cam: *frowns* Yeah, and I know who set it up too. Don’t think that this deal with me and the big cheese is over, not by any means.

M: Um, you’re talking about the God of all Gods, right? If I remember correctly, that term confused Mo too, so you might want to clarify.

Cam: Oh good grief, everything confuses Mo, but you have a point. Yup, I’m talking about Zeus, and his no-good sidekick. Who also makes an appearance in Mo’s book, Pure.

M: Why don’t you tell everyone who Mo is?

Cam: *grin* He’s Morpheus, God of Dreams, and a good friend to me… a cute, sweet, shy little guy. He’s in Perfect quite a bit. And hey! He wanted a mate too, so why aren’t you not on his ass? Hmm?

M: Well jeez, Cam, by then it was a moot point! I’d already decided to do all three books. But yeah, Mo is really something sweet. Quite the opposite of you.

Jeff: Oh, there are parts of him that are very sweet. Want to talk about the pineapple incident? *laughs*

Cam: *blushes* Thank the gods for Google, that’s all I’m going to say. I mean, really, I couldn’t tell you what I ate at Mt. Olympus affected how my—

M: Ah yeah, how about we save that, hmm?

Cam: *grins* That might be a good idea. We’ve got to get going anyway. We have a lunch date with Mo and Zygi. *stands up* Thanks for letting us stop by and talk though!

Jeff: Yeah, Pure comes out in the summer, right? Bye, everyone.

M.A. Church
M.A. Church lives in the southern United States and spent many years in the elementary education sector. She is married to her high school sweetheart and they have two children. Her hobbies are gardening, walking, attending flea markets, watching professional football, racing, and spending time with her family on the lake.

But her most beloved hobby is reading. From an early age, she can remember hunting for books at the library. Later nonhuman and science fiction genres captured her attention and drew her into the worlds the authors had created. But always at the back of her mind was the thought that one day, when the kids were older and she had more time, she would write a book.
By sheer chance she stumbled across a gay male romance story on the web and was hooked. A new world opened up and she fell in love. Thus the journey started. When not writing or researching, she enjoys reading the latest erotic and mainstream romance novels.

Excerpt:
The arid, hot air of the desert swept across Cupid’s body and sucked the breath from his lungs as he stepped off the shuttle bus in front of The Palms casino in Las Vegas. Running his fingers through his short, curly blond hair, Cupid walked into the coolness of the lobby. He scanned the area, hoping to see the owner of the place—a certain gentleman named Jeff Mayfield—and resisted the urge to rub his hands together gleefully; he had big plans for Jeff.
“Ah, it’s good to be back,” Cupid said quietly. He was disappointed he didn’t see the one he wanted, but a small smirk lifted his lips. “Lay a monster challenge on me, will you? Claim you don’t believe love is for you? By Zeus, I’m going to have such fun proving you wrong. Jeff, you poor human, you don’t stand a chance when the god of erotic love is involved.”
Four months had passed since Garrett and Randy, his most recent targets, had confessed their love to one another. A pleased smile crossed Cupid’s face as he thought of the night he had spotted those two. He’d had every intention of planting one of his golden arrows into Garrett or Randy while they were at the craps table, but the oddest thing had happened.
His bowstring broke each time he lined up a shot. This had never happened to him before. He was known by many names, but he preferred Cupid, the name his mother had given him. Greek mythology, Roman mythology… he shrugged. Little did the humans know just how badly they had messed up the pantheon, not that it mattered. He knew the truth, as did others of his kind. Later, while he and his sister, Psyche, watched the light go out in the window of the Peabody Hotel, he had idly wondered if the Moirai, also known as the Fates, had intervened. As curious as Cupid was, it was in his best interest not to question why. Those three gave new meaning to the words hazardous to your health. Thanks to them, the most widely-known image of him included a diaper.
“Well, let’s get this show on the road.” Cupid strolled across the lobby to the check-in desk, getting his license out of his billfold. He knew Reception would card him because he looked so young.
After a long debate with the girl behind the counter on whether or not he was old enough to rent a room at The Palms, much less use the casino—and the fact he had such a common last name like Smith—he stood in front of his room. It was one of the casino’s standard hotel rooms, nothing special, but it had what he needed: privacy. He dropped his suitcases near the door and walked into the bathroom. Taking a deep breath, he gazed in the bathroom mirror at his reflection.
He planned to do something that defied logic and would make his dear sister laugh hysterically. Cupid had debated doing this on Mount Olympus, but Zeus would’ve noticed the surge of energy, and the last thing he wanted was interference from the god of all gods. As it was, when Zeus figured out what he planned, the big man wasn’t going to be happy. If this worked, he would be weak and need to rest where he’d be safe. There was those on Mount Olympus that would take advantage of his weaken state, so this was the best place to attempt what he planned.