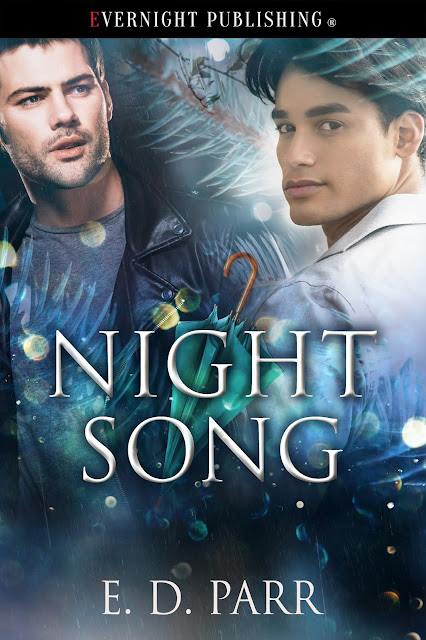 Twenty-five year old Oliver Honeycutt has no idea how handsome he is. He’s creative, brilliant at his job, and underused in the designer fashion store where he works. Behind the scenes, Oliver takes special care with orders for customer, rock star, Zane Highwood. When Zane is to be the main attraction in the store’s Christmas party, fashion show, Oliver hopes Zane will notice him.

Multi-millionaire, twenty-five year old, Noah Somersby, made his first million before he was twenty-one and now owns a number of casual-chic menswear stores. He’s a designer, gorgeous, and desperate to find a man who will love him for himself and not see dollar signs as they kiss.

Noah doesn’t often take the train into the city, but one rainy day he does, as he settles into a seat opposite Oliver, the two men exchange interested glances.

In fact, Noah is super attracted to Oliver and Oliver thinks Noah is gorgeous.

As the store holiday season party approaches, can serendipity bring them together?

Noah read attraction in Oliver’s gaze. Desire raced over him. He wanted to go slow, but at the same time, he yearned for Oliver’s naked skin against his own, Oliver’s mouth on his, and a sigh escaped him.

Oliver must have sensed his need. He put his own coffee down next to Noah’s, then in a fluid move slipped his hand along Noah’s jaw and held the side of his neck. He whispered against Noah’s lips, and the tease of breath raised a tingle all the way down Noah’s chest.

“I suddenly want you to rush me. I want to rush you. I want to leap ahead as if we’ve seen each other lots. I want to strip you and have you naked in my arms.”

Noah’s cock shot into an erection. His eyes shut, heavy with lust, as he closed his fingers around Oliver’s and stormed his mouth with urgent kisses. He murmured between them, “I can’t think of anything I want more.” He let go of Oliver and opened the buttons on his shirt with trembling fingers. His entire body tensed as sexual need raced over him. He pulled off his shirt and dropped it beside him.

Oliver swept his hands over Noah’s chest and held his shoulders.

The passion in Oliver’s kiss took Noah’s breath away. He dragged Oliver’s t-shirt up. Then, remembering his hurt arm, he gentled his touch and kissed along the soft part of Oliver’s shoulder.

Oliver helped pull off his t-shirt.

The sight of Oliver’s muscled chest sent a pulse of sensation through Noah’s balls, and he ran his fingertips up and down Oliver’s skin. “It feels good to touch you.” Lust overwhelmed him. He hadn’t realized how much he’d missed being with a man until then, and this was special. Touching Oliver let loose such intense desire, he swept his fingers down Oliver’s torso and plunged them into his jeans and underwear. He contacted the head of Oliver’s leaking cock, and his fingertips slipped on the pre-cum. He groaned with pleasure as Oliver held his face and kissed him hard.

Noah opened Oliver’s pants as he returned the delicious kiss. He pushed them and Oliver’s boxers down. Delight filled him as Oliver lifted his ass so that he could take them all the way down his thighs. His heart hammered. His cock leaked. His stomach tensed so tight his balls lifted. He moaned softly into the kiss as he grasped Oliver’s hard dick. Noah stroked a few times, his thumb circling the slippery pre-cum on the slit.

Oliver broke the kisses to breathe. “I want your pants off, too. Your hand on my cock is heaven.” He sighed against Noah’s mouth. 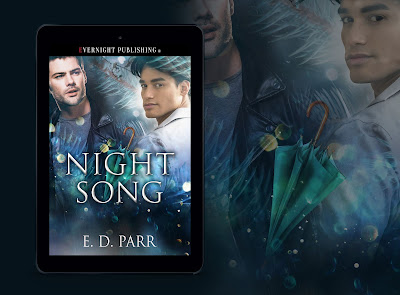 On launch discount at Evernight only https://www.evernightpublishing.com/night-song-by-e-d-parr/

Or find this gay romance on All Amazon sites http://mybook.to/NightSong