Run, run as fast as you can! I just realized I did not set this up last night! It's all my sister's fault, she kidnapped me to watch Iron Man 1 and 2 so I can go with her to the movies to watch Iron Man 3.We were up until 3am! But enought about Iron Men, you're here either to visit the Evernight Book Boyfriend Blog Hop, in which case you can click Here, or for the #SexySnippets and #8Sunday.
Welcome in all cases! *smile*

The following sentences belong to A Dragon's Heart, A Demon's Blood...

Adrian shuddered. The Eaters were the worst kind of demons, and even he felt apprehensive in their presence. He’d asked Zendaya for a special sort of monster to scare Victoria into submission but he hadn’t expected her to send one of the spirit scavengers. These demons had no shadowy manifestations, nor could they impersonate humans. They were the demons of myths and
legends, the sort that scared humans to death. The creature walked toward them on unsteady and stilted goat legs, blood dripping from festering wounds on its human torso. He sneered at them and lifted an arm, his hands ending in long, slashing claws that could easily rip your heart out.

The smell of fear and panic rose off her in waves. She’d always felt the eyes, seen shadows, but she
had no idea of what really lay behind. Now, for the first time ever she was catching a full glimpse of the watchful eyes.
“I…”
“I can take you to safety, Victoria. I can’t explain now. You just have to trust me.” He took a step back, dragging her with him as the demon approached them with hesitant, eerie steps, emitting low
cries.


***
Do you think she'll trust him to take her to safety? I'm not saying :p Now, go ahead and read some of those great sentences out there! 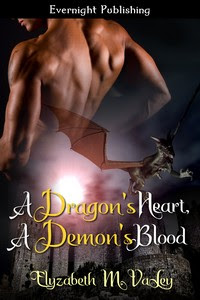 He is a shadow in the dark, smelling your scent and sensing your fear...
Legendary bounty hunter Adrian Ormonde is no ordinary man. His life is filled with secrets and questions, blood and lust. His only concern for 150 years has been survival and discovering the truth behind his demon-dragon nature.Until he meets his new assignment: Victoria Green.
Victoria Green has felt eyes watching her every move ever since she can remember. Then, Adrian appears. The eyes vanish but new dangers arise as she falls for the mysterious hunter. Cast into an ancient conflict between dragons and demons, Victoria must trust Adrian’s skill to be enough to protect her from both the outside world and that which grows within her.
Chance brought them together but will love and passion be enough to keep them joined? Or will the other forces at play in the dragon-demon worlds destroy them forever?
Be Warned: menage sex (MMF, MFM), anal sex, m/m sex, violence
Available at:
Evernight Publishing
Amazon.com
Amazon.uk
ARE
Bookstrand
Posted by Elyzabeth M. VaLey at 7:32 AM